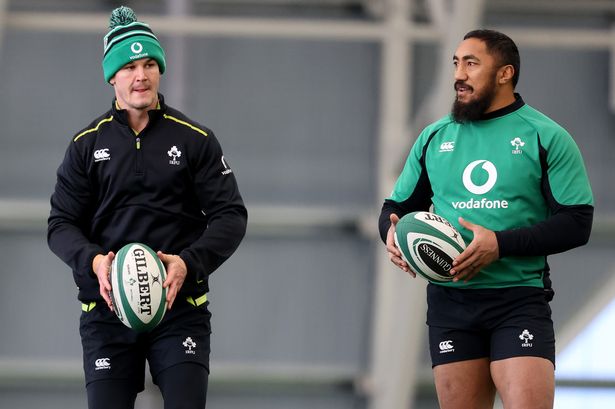 Johnny Sexton and Bundee Aki return for Leinster and Connacht ahead of the first leg of their Heineken Champions Cup round of 16 tie at the Sportsgrounds on Friday night.
Both sides have called upon their contingent of Irish Internationals. Cian Healy, Dan Sheehan and Tadhg Furlong form an all-Ireland front row for Leinster. Lock Gavin Thornbury gets his first start of the season for Connacht having recovered from a shoulder injury.
Leinster have made 12 changes from the team that defeated Connacht at the Sportsground in the URC less than two weeks ago.
Jimmy O’Brien moves to the right wing to accommodate Hugo Keenan at full-back, Luke McGrath is at scrum-half with Jamison Gibson-Park has to settle for a place on the bench.
With James Ryan and Ryan Baird still unavailable Ross Molony and Josh Murphy start in the second row.
Caelan Doris, Josh van der Flier and Jack Conan all keep their place in a familiar back row. Sexton makes his first Leinster appearance since January.
For Connacht Aki replaces Sammy Arnold in an otherwise unchanged backline from the side that defeated Benetton last weekend. Thornbury makes a return and will partner Leva Fifita in the second row as Niall Murray drops out of the squad.