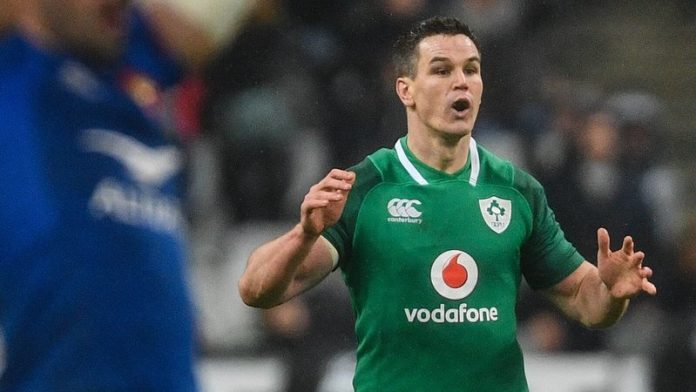 Ireland captain Johnny Sexton has been ruled out of Ireland’s Six Nations clash with France on Saturday through injury. Sexton suffered a hamstring strain in training on Wednesday and will be replaced by Munster’s Joey Carberry.
Carberry’s inclusion is the only change from the side that defeated Wales in their opening game on Saturday. It’s his first ever start in the competition and he will be alongside Jamison Gibson-Park.
Connacht’s Jack Carty will provide fly-half cover on the bench. Iain Henderson and Robbie Henshaw are named in Ireland’s bench. Henderson last played for Ireland against New Zealand in November but then suffered an ankle injury playing for Ulster in the Champions Cup.
Henshaw has made four appearances this season due to a groin issue.
Ireland Head Coach Andy Farrell does not expect Sexton to miss the rest of the championship and could be back for the game against Italy on February 27th.
Speaking to the press Farrell said: “It’s a small hamstring strain that is definitely going to keep him out for this weekend,” Farrell said. “We don’t envisage it being difficult at all really. He might be a week to 10 days, something like that.
“But what we don’t want to do is to risk anything and make that worse and take him out of the competition completely. We expect him to be back pretty soon.”
Meanwhile France have handed Yoram Moefana his first Six Nations start. He replaces Jonathan Danty who suffered an ankle injury against Italy.

Tiger Roll given weight ahead of Grand National