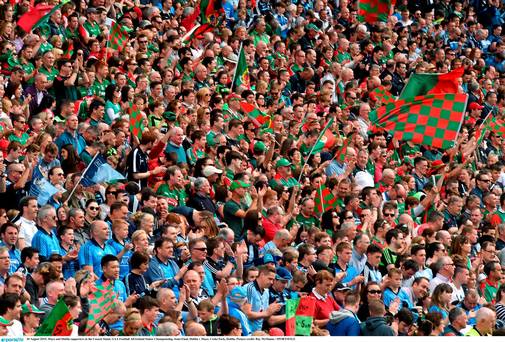 For anyone who might be interested in omens or signs that might give us an insight into what could happen this Sunday, there are no shortages of them to look at this week. With Tipperary already crowned All Ireland hurling champions for 2016, it’s interesting to note that over the history of the championship Tipp and Dublin have been the respective hurling and football champions on no less than 5 occasions. The most recent year this has occurred was in 1958, exactly 58 years ago!!! Of course, there’s hope for Mayo as well, Tipp and Mayo have both won in the same year twice previously. Curiously enough, with Dublin looking to win Sam for the 2nd year in a row, Tipp and Mayo both achieved the 2 in a row alongside each other in the years 1950 and ’51. This also happened to be the last time Mayo became champions.

Of course, while this might put an interesting twist on things for some, for the vast majority of supporters who’ll be watching this Sunday, none of this will have any bearing on the 2016 finale. It would obviously be far more relevant to look at more recent fixtures between the two sides. Over the last 10 years Dublin and Mayo have faced off 5 times, Sunday will be the 6th. The results currently stand at 2 wins each and a draw. Mayo won in 2006 and 2012, by 1 point and 3 points. Dublin won in 2013 and 2015 (in a replay), by 1 point and 7 points.

While again, these results might not have a huge influence on what’ll happen on Sunday, they do show us one or two things that are definitely of some importance. Firstly, in my eyes anyway, that Mayo have absolutely no fear of Dublin. I played in the first of those 5 games, the defeat in 2006, and I can still clearly remember, unfortunately, how when Mayo are on song they are fairly irresistible. They’ve shown that so many times over the last decade. They’ve always had top athletes and footballers as long as I can remember, and have deservedly been one of the top 2 or 3 teams in the country for a number of years. Secondly, Mayo are one of only two teams (the other being Donegal) to have managed anything other than a defeat against Dublin in the championship since 2010.

When it comes to this recent rivalry, each of those last 5 meetings has been a fabulous spectacle. They have (almost) all been ridiculously close, they have all been very difficult to pick a winner from, and they have all showcased the superb attacking football both sides are capable of.

So what’s different about this year? Well for starters, for the first time since 2010, Mayo are not Connacht champions. Mayo have dominated their province and brought high expectations into every semi-final and final they have appeared in, only for each season to end in disappointment. Another thing is that there seems to be a lot of talk about how there’s no talk from the Mayo camp. Are they waiting in the long grass and licking their lips in anticipation? Undoubtedly. And while Mayo have stuttered through the qualifiers, apparently never having been tested, they now find themselves only 70+ minutes away from history.

Dublin on the other hand have followed the script perfectly, winning all of their games by an average of 8 points, beating traditional rivals Kerry in a classic semi-final thriller, soaking up the absence this season of two of their all star defenders admirably, and marching to the final with real purpose.

But of course, all of this goes out the window once the ball is thrown in on Sunday. Previous results will be forgotten and thrown out along with the form book. Dublin at their best have been unstoppable this year. Mayo at their best, which admittedly hasn’t been seen quite as often as they’d like, have shown huge amounts of athleticism, flair and attacking prowess. Dublin have Diarmuid Connolly, one of the most naturally gifted players of his generation. Mayo have Lee Keegan who can’t wait to get his hands on him. Mayo have Aidan O’ Shea, a colossal athlete with pace, strength and the footballing ability to rival the best. Dublin have Philly McMahon to show that the best form of defence is often attack. I could go on. With the players that’ll be on show this Sunday, household names like Brogan, Flynn, Rock, O’ Sullivan, O’ Connor, Moran, Dillon, Higgins to name but a few, I hope and expect to see a titanic battle to rival the best we’ve seen between these teams in recent years.

Pundits all seem to have installed Dublin as favourites. Understandably. The semi-final performances would point to a Dublin win. The form book points to a Dublin win. I’d be pretty confident though that Dublin are about as interested in the form book as Mayo are. As underdogs, and considering the crushing defeats the county has endured over the years, I can’t imagine too many people outside of Dublin would be anything other than happy to see a Mayo victory. Quiet they may have been during this build up, but they certainly won’t be quiet this weekend. Dublin are coming to Croker to achieve something not done since the 70’s. Mayo are coming to create their own bit of history. I know for myself anyway, Mayo are far too good to be written off and whether they realise it or not, have so much potential to cause an upset that I’ll be travelling to Croke Park on Sunday as a Dublin supporter hoping for more than expecting a Dublin win.