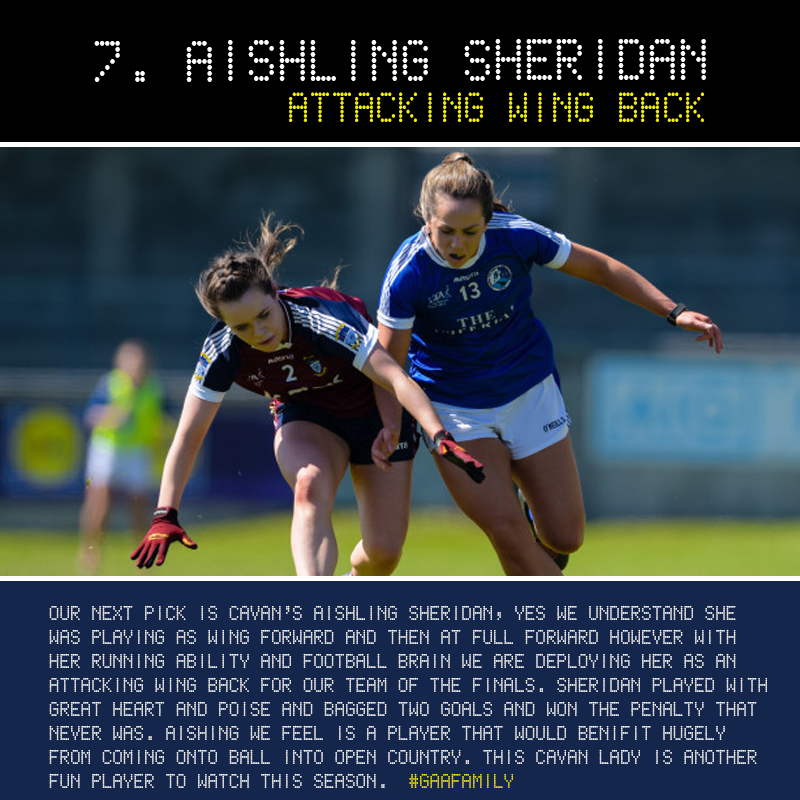 Sportstalk continue our team of the finals selections with the announcement of the six defenders. Cavan’s Aishling Sheridan has been selected at wing back although applying her trade currently within the forward line. Picking these kind of teams are difficult you can imagine but the reasoning behind it is we feel she is a better player coming onto the ball with open country in front of her and wait until you see the forward line on Thursday and you will understand a little better..

Here are our current selections and why,

Our first pick is Dublin net minder Ciara Trant. This lady played injured and produced a string of brave saves along with confident kick-outs that continually propelled her team forward. In the first half especially Ciara was off her line quickly to prevent Mayo getting any traction in the game.

Anna Rose is our next pick, the Tipperary Number 17 had a job to do on superstar Aishling Sheridan and managed it really well. Very combative in the first half and kept Sheridan at bay on the wing while punching forward with her long rangy running style. Kennedy’s controlled balanced running was a constant treat and this Tipp lady is one to follow for the future.

Finnegan oddly wore the number 16 jersey normally used as the sub keeper jersey where we’re from but deployed at full back on sunday and marking one of the stars of the game Sarah Rowe. Sinead is the type of full back teams only dream of can read the game beautifully and gets a hand without giving away the foul. Sticky full back and hugely impressive in the final.

Not the one from Girls Aloud folks, this Wexford Lady is our next pick. One word comes to mind when trying to describe her performance and style of play “Tigerish”. Marking the Meath captain Niamh O’Sullivan Kenny kept the Meath lady to just a point. Kenny was involved right on hand to mop up any loose breaking ball within the full back line and distrubted simply and effectively. O’Sullivan for Meath is a savage baller keeping her at bay was a massive reason Wexford won.

Another Wexford pick this lady ran Meath ragged on the wing. Not surprising Moore was on the same wing as Harding – Kenny, Niamh got in behind the Meath defence on a number of occasions playing the attacking wing back role excellently. Moore gave Wexford a platform for attack but instead of running down blind alleys layed off ball well and created the perfect overlaps.

Tipperary’s engine Jennifer Grant is our next pick. Playing in a sweeper role Grant was very effective in cutting out ball at times but was way more effective playing give and go football. Grant made some cracking runs from the back line out of defence breaking at pace and covering the guts of 50 yards in seconds. Once pushed up the field a little more added a crucial point and her work ethic and reading of the game makes her a fun player to watch.

Our next pick is cavan’s Aishling Sheridan, yes we understand she was playing as wing forward and then at full forward however with her running ability and football brain we are deploying her as an attacking wing back for our team of the finals. Sheridan played with great heart and poise and bagged two goals and won the penalty that never was. Aishing we feel is a player that would benefit hugely from coming onto ball into open country. This Cavan lady is another fun player to watch this season.

Check back tomorrow for our Midfield and Manager of the Team selections.