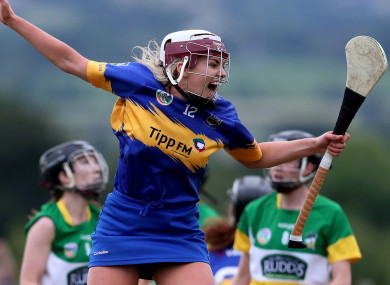 Tipperary defeated Waterford 1-14 to 1-7 to reach the All Ireland semi-final, where they meet reigning All Ireland Champions Cork in a couple of weeks time.

This season had been a massive success for both counties before today’s game with Waterford reaching the play offs for the first time and Tipperary showing massive improvement from last seasons campaign.

Tipperary raced in to an early 2 zip lead with points from Grace O’Brien and Ciardha Maher. Waterford responded with a free from Beth Carthon before Tipperary marched further ahead and laid the foundations for their 7 point victory as they lead 0:08 to 0:01 after 20 minutes before Waterford registered only their second point.

Waterford were appearing in the playoffs for the first time ever and needed and early tonic to settle them down and get them firing. The goal they got after 28 mins was on the back of a dominant period for the Deise women having been behind 0:09 – 0:02 after 22 minutes they rattled off 1-02 to bring the deficit back to 2 before Grace O’Brien and Captain Orla O’Dwyer extended Tipperary’s lead back up to 4 at the break.

Waterford rid of nerves and occasion came out firing and halved the deficit after the break before Orla O’Dwyer fired over for Tipperary to leave the scoreboard reading 0:11 to 1:06. This game appeared to be about to explode after Waterford’s Beth Carthon responded again through a free but we went almost ten minutes before another score was registered.

The first 20 minutes and this 10 minute period is where Waterford will be livid with themselves having matched Tipperary for large parts of the second half.

The final 15 minutes was tense as Tipperary seemed to be idling in front with a dangerous lead of 0-13 to 1-07 going into the final 5 minutes. In times of real pressure you will always find one that comes through and that lady was the excellent Cait Devane. Scoring 1-1 from 2 frees to catapult Tipperary into the All Ireland Semi Final for the first time in 10 years.

This is a huge disappointment for Waterford but on the back of this season and the promise they have shown in recent years a return to the playoffs next season is by no means a guarantee but now a definite target. They are a pretty young side with Beth Carthon on your team you will always have a fighting chance.

Tipperary lead by the excellent Orla O’Dwyer are on the up this year and will have a tough next game against Cork as expected from your opponent in an All Ireland Semi Final. They will be rank outsiders for this game but that won’t phase them and if they get all their weapons firing have every chance.

The Semi-Finals double-header will take place on the evening of Saturday August 18th in Semple Stadium, Thurles.

The battle of the midfields is where game will be won…...