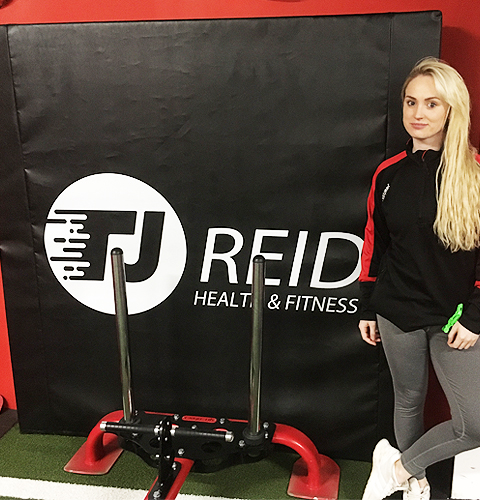 This month of course is Irish Breast Cancer Awareness Month and early next week Niamh will be joining the girls of SportsGirls Podcast to discuss her role & how important it is for young girls to attend breast screening as early detection can prove vital.

Up on the wall as we climbed the stairwell was the quote “Change is right around the corner” a little corny one might think until you see the actual gym itself, wow first class job folks.  Instantly motivated by it, and to the vast majority of people that are given nightmares by the sight of a gym, eh no chance here this will change you guaranteed.

What’s so appealing in comparison to other gyms is that everything is “on point” as the kids say these days meaning, from the branding to the equipment everything is top class and suitable no matter what your fitness level.  Honestly in all our travels folks, we can’t say we’ve seen a more modern, hip and likable facility to workout at than TJ Reid Fitness.

Niamh de Brún’s warmth and friendliness in her welcome is nice to see as we sit down to begin our chat, the first question that springs to mind is

How does a Limerick Lady wind up becoming Miss Kilkenny 2017?

“I moved to Kilkenny in May 2015, it was always something that interested me and something I really wanted to do, so when the opportunity arose I decided to use it as a way to get to know people and luckily winded up winning it which was brilliant.” It’s not just a case of turning up on the night,  Niamh describes what the process was in the lead up to Miss Kilkenny Competition,

“The organisers of Miss Kilkenny organised get togethers and launches in which they got to know us a bit better, in actual fact one of them was a judge in which we weren’t aware, so in the lead up to the night we were being judged all the time. They were really good for those that hadn’t modelled before they thought us how to walk on stage. The preparation I did myself was I had a few friends that won Miss Limerick and Kerry’s in the past and they were really helpful in preparation for the interview section and also working in HR I would be quite use to that environment which I suppose was an advantage”

Confidence is required in abundance to put yourself out there like that to be judged,

“Yes definitely, you do have to have self confidence especially as you’re going up against beautiful looking girls with so much confidence, it does kind of come out as you speak to people and how you portray yourself. Especially going into something like Miss Ireland that’s one thing you have to have and the best piece advice I can give anyone is Fake it til you make it ”

Criticism is something you must be very good at taking, especially as you put yourself out there on social media.

“I’m a girl so sometimes you do let it get to you a certain bit, but I always say to anyone that does approach me after being criticised and are down is let it get to you for the evening go to bed and forget about it the next day ”

Winning Miss Kilkenny your family, friends and especially TJ must have be thrilled you kept up the winning tradition,

“Yea I suppose, like when I entered it I didn’t think I would win I was just doing it to meet people as my friends and family were in Limerick and I didn’t have too much of a connection only with TJ and his family so it was nice to have a trophy of my own to bring back to the family”

Of course competing in Miss Ireland then you went on to further success being crowned Miss Social Media what did that entail?

“I suppose tagging, uploading pictures, tagging sponsors from the many Miss Ireland events I attended in the lead up to Miss Ireland, putting up pictures from any event I was asked to do by the organisers of Miss Ireland I suppose that kind of won the title for me”

Social media is massive these days, do you have much difficulty uploading to all the platforms?

“No not really I suppose since the introduction of story mode with Instagram people are leaning towards that at present and I try not to post up regularly maybe twice a week as you don’t want to flood it either, but generally it only takes a short amount of time, to be honest I don’t really use my snapchat anymore, facebook a small bit, Twitter I love so I do use Twitter also”

What Social Media Platform do you prefer?

What one thing you hate about social media?

“How people portray their lives on it by just posting up the highlights and giving a false sense of things by posting up stuff that might not be true. I think it gives a false impression to the younger generation. I love the honest bloggers that post up the bad moments when their down and having a bad time. They are the people I like to follow!”

What advice would you give young people using social media today?

Take care in what you post up as once its up, its there forever and will be available to future employers or whoever so take care and don’t put something up that you wouldn’t like on the front of a newspaper, also not everything on social media is real so keep that in mind.

That’s one thing to note future employers will be checking your accounts,

“Yes that’s for sure as working in the HR industry that’s the first thing I do when I get a CV handed into me, so be careful.”

You have an impressive following on social media especially your Instagram, how did you accumulate those amounts?

“I don’t know people regularly asked me that”

Did you buy them?

How long do you spend on social media each day?

“I go on Instagram everyday, now I don’t post everyday but I still go on and reply to messages and stuff but I don’t have notifications turned on so I normally go in the mornings and evenings so it doesn’t take up all of my time”

Any chance you will turn full time to blogging maybe?

“No I don’t think so I don’t think i’d have the patience for it, you know I love my job and I have friends that do it and I see the amount of time and work that’s involved so no I don’t plan on it anytime soon.”

Niamh De Brun at a glance!

One food you couldn’t live without  – Chocolate.

Fav workout time  – Morning time although I rarely get to.

Most Romantic thing that has ever being done for you – Whisked off to New York this year!

Tune into SportsGirls Podcast next week as Niamh comes on to talk about Breast Cancer Ireland, as part of Irish Breast Cancer Awareness month.

Brendan Cummins keeping tabs on what was and what is to...