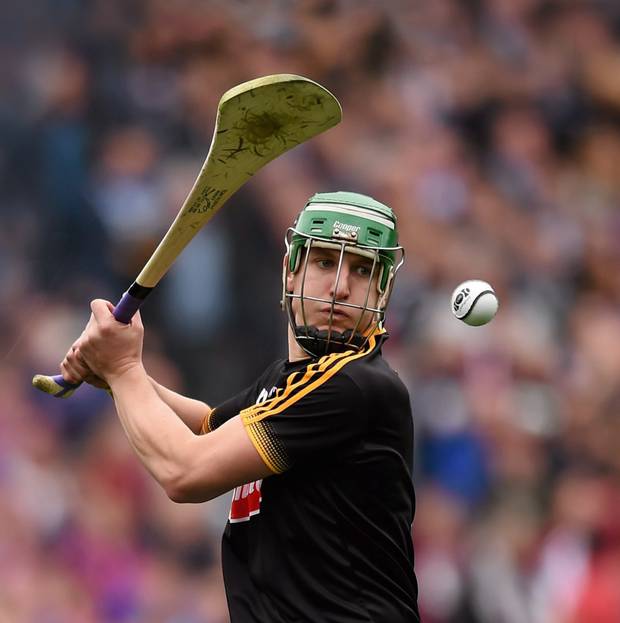 What is your Favourite……………

TV Programme – Ex on the Beach.

Box set – Narco’s. Anyone who doesn’t know who Pablo Emilio Escobar Gaviria is should have a long hard look at themselves.

GAA Pitch – Skeough. Win the toss, play with the wind and the hill for the first half. Park the bus for the second half.

Position on hurling pitch – Midfield. I can’t score nor defend so presume that’s my position.

County jersey (not your own) – Monaghan

Song to listen to before a game – Troy Ave’s song Doo Doo.

Holiday destination – Would love to go back to Australia.

Hurling cliché – When things are going wrong you take off the corner forward.

Quote – “He who is not courageous enough to take risks will accomplish nothing in life.”

Woman on TV – Any of the Sky Sports presenters.

Other sporting event attended – Attended a QPR soccer match in Loftus Road a few years back, atmosphere was unreal.

What’s app group you are in – Great craic on the Kilkenny one.

Radio show you listen to – The Breakfast Republic on 2FM

Podcast – Any sports ones.

A big bowl of Coco Pops in the morning first thing, it settles the stomach. After that our plan is pretty laid out for us what we eat in the hotel with soup, sandwiches, yogurts and fruit. The big thing is the soup! If the soup is not nice it can be a disaster of a day.

A few years back myself and Mattie Ruth started as the 2 corner forwards in a league game against Cork and the soup was rotten before the game. The 2 of us were useless and taken off after 40 minutes so we blamed the soup!

Practice makes perfect. Any technical weakness can be worked on. You don’t need fancy gear or equipment, all you need is a hurl, ball and a wall.

Colin Fennelly’s display against Tipp in the league a few years back was unreal, what surprised us the most was the quality of his striking.

For the club it would have to Paul Phelan in a club football match against Railyard about 5 years ago. He was unmarkable. Paul is a soccer player so it helps he can actually kick the ball straight.

The fact I don’t have an other half makes it really awkward! But it would be a walk barefooted on Tramore’s stoney beach with a romantic meal to Dooley’s chipper after. Dessert can be anything in the form of white chocolate. Take note ladies.

Wouldn’t change any rules at all.

Colm Bonnar with the Fitzgibbon in WIT, always got the best out of players and created a brilliant team morale that made players do anything for him and each other. Brilliant Elvis impersonator too.

I’m not sure whether he has played county or not, but it would be Fergal Freyne who played full and corner back for Glenmore for years. He retired this year after we won the club All Ireland. Some warrior and club man. Also has the biggest set of calves known to man.

Michael Fennelly probably has something in the pipeline already. Would love to see Mark Phelan have one as he is one of the funniest people I know.

Jim Carrey, Ray Lewis and Freddie Flintoff. Jim Carrey because he will keep the mood upbeat. Ray Lewis to see if he really was involved in the shooting incident and find out how mad he is. Freddie Flintoff so we can go on the lash with each other afterwards.

I was hurling intermediate with the club in 2007 and John Phelan who was centre forward at the time told me to stay out on the wings and he will hand me out the ball. “Let me win the dirty ball and take hardship” he said. I can still be seen floating around the wings to this day even though John is retired with 5 years.

Funniest thing you have watched on you tube –

Any of the Paddy Power fan denials are brilliant.

Dan Bilzerian. Tweets pictures of buckets loads of money, travels the world on his private jet, drives massive get out of my way jeeps, plays with guns and has half naked women all over him. Enough said.

Probably when we got relegated with the club back in 2014.

Eoin Larkin with Kilkenny, think it is the old age.

James Aylward from Glenmore. James is a farmer so is never happy with the weather (too dry or wet!) or whatever time we have matches or training.

Mark Phelan, Conor Martin and Joey Holden. If you are more than likely not getting off the Island you may as well have a laugh, none better than these 3.

3 team mate you wouldn’t bring to a desert island

My brothers Patrick, Alan and Shane (Sorry James you’re not a team mate anymore!). It would be pointless, if we didn’t die of starvation we would kill each other.

A heap of funny stories that might not be suitable for this!! Don’t have many PG stories but one would be after last year’s county final we obviously were enjoying ourselves after the game and having the craic. My younger brother Shane had a bit too much craic and was at home in bed before 9 o clock. The whole way home our mother Bridie had to rub his back as he wasn’t feeling great! We now call him Beauty after Sleeping Beauty. He woke up the next morning not a clue what had happened after missing the best night of the year in Glenmore. After the club All Ireland he hit a milestone as he stayed out longer than 12 o clock.

Watch out next week for the next  Sportstalk GAA Star Secret!

Star Secrets: Dublin Hurler Paul Ryan let’s us in on a...