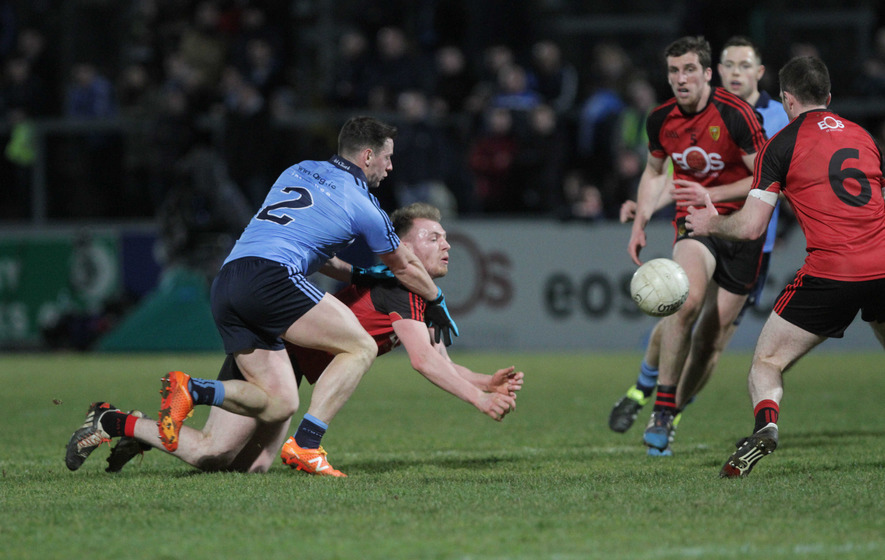 Mayo v Monaghan, 7pm, Saturday – Monaghan travel to Mayo looking for a win to start their campaign. The visitors will once again look to Conor McManus in attack, while they also have experienced players Darren and Kieran Hughes and Colin Walshe. However, the Farney will be minus Vinny Corey, Dessie Mone and Jack McCarron. Mayo can call on Colm Boyle, Lee Keegan, Aidan O’Shea, Cillian and Diarmuid O’Connor. Home advantage swings it for Mayo Prediction: Mayo

Cavan v Dublin, 2pm, Sunday – The reigning All-Ireland Champions travel to Breffni Park aiming for their fifth successive Division 1 title this year. Dublin have so much talent across the pitch, in defence Jonny Cooper, Philly McMahon and James McCarthy. In attack Bernard Brogan, Kevin McMenamon, Paul Mannion, Paul Flynn are all superb players. This will be Cavan’s first time in the top flight since 2004 and they will be looking for a good performance at the very least. Seanie Johnston, David Givney, Cian Mackey and Conor Moynagh. Cavan are 25/1 outsiders for the game. The bookies don’t get it wrong. Prediction: Dublin

Donegal v Kerry ,2pm, Sunday – Donegal open their league campaign against Kerry but will be minus quite a few players due to retirements and other commitments. Eamonn McGee, Colm McFadden, Christy Toye, Rory Kavanagh and David Walsh all retired in the autumn months, while Odhran MacNiallais and Leo McLoone have opted to take a year out. Kerry are coming into this game on the back of their McGrath Cup success over Limerick. Eamon Fitzmaurice has brought in Maurice Fitzgerald as selector, while he also started very strong teams in the McGrath Cup. Kerry to get to win here but it won’t be for the faint hearted. Prediction: Kerry

Tyrone v Roscommon, 2pm, Sunday- Tyrone play host to Roscommon in Omagh in Sunday. The 2016 Division 2 champions, Tyrone, will be looking to improve further and possibly reach a league final. They have excellent players Mattie Donnelly, Peter Harte, Colm Cavanagh and Sean Cavanagh. Roscommon will be without Senan Kilbride who has retired but Diarmuid Murtagh, Ciaran Murtagh and Cathal Cregg. Tough opener for Roscommon and I think Tyrone will win this. Prediction: Tyrone

Down v Fermanagh, 7pm, Saturday– An all Ulster affair it will be on Saturday evening in Newry. Both teams will be looking for good starts considering Galway and Cork are in this division. Fermanagh will look for Sean Quigley and Tomas Corrigan to lead them once again and I think they will just about sneak the win in Newry on Saturday. Prediction: Fermanagh

Derry v Clare, 2pm, Sunday – Derry and Clare meet on Sunday in what should be an entertaining game. Clare will be without Gary Brennan who will on club duty on Saturday with Ballyea. Derry will look to Mark Lynch in attack to get them over the line in this game, and I think he will. Prediction: Derry.

Galway v Cork, 2pm, Sunday – This is the biggest game of the weekend in this Division, many people these two teams will be promoted and a win here for either side at this early stage could go a long way. Galway have a strong team with Sean Armstrong, Eamonn Brannigan, Danny Cummins and Damian Comer all set to start. Cork also have a strong team out with Paul Kerrigan, Aidan Walsh, Peter Kelleher and Ian Maguire. A close game I am expecting, but Cork to edge it. Prediction: Cork.

Meath v Kildare, 2pm, Sunday- A local derby will take place in Navan on Sunday with both sides looking to gain promotion to the top division. Mickey Burke, Donal Keoghan, Graham Reilly and Eamonn Wallace are all named in Andy McEntee’s side. Kildare will have Niall Kelly, Neill Flynn, Tommy Moolick and Paul Cribbin in their starting line-up and would be hopeful of a win. I feel this will be a tight game so therefore going to go with a draw. Prediction: Draw

Longford v Offaly, 2pm, Sunday – This will be a very close game. Offaly will once again look to Niall McNamee in attack, while Brian Darby is also a very good player. Longford will look to Sean McCormack, Robbie Smyth and Barry McKeown for experience. Longford to win this game just about though ! Prediction: Longford.

Tipperary v Antrim, 2pm, Sunday – Liam Kearns has selected a strong team for his sides first game in the league. Michael Quinlivan, Conor Sweeney, Philip Austin and Paddy Codd are all named to start. CJ McGourty returns for Antrim, while they will also have Kevin Niblock and Tomas McCann in their ranks. Tipperary to win with some to spare. Prediction: Tipperary

Waterford v London, 1pm, Sunday – Waterford will be looking to start the campaign with a win over London. Patrick Hurney, Tommy Prendergast and Michael O’Halloran are all named in the side. Expect the home side to get the win. Prediction: Waterford

Westmeath v Carlow, 1pm, Sunday – Westmeath will be looking to return to Division having been relegated in 2016. They have superb players such as John Heslin, Kieran Martin and Dennis Glennon. Expect Westmeath to send out a big statement here. Prediction: Westmeath

Wicklow v Leitrim, 1pm, Sunday – Leitrim have opted to included 7 debutants in their starting 15 for their visit to Aughrim. However, they have experience with Emlyn Mulligan. Wicklow will look to Stephen Kelly, Ross O’Brien and John McGrath. Wicklow to win in a close encounter. Prediction: Wicklow.

Wexford v Limerick, 3pm, Sunday – Wexford will be looking for promotion this time around but they will find it tough against Limerick, Seamus McEnaney has included Daithi Waters, Ben Brosnan, Brian Malone and Ciaran Lyng in his starting line-up. Limerick can call on Ger Collins, Darragh Treacy and Seamus O’Carroll. A close game but Wexford to win. Prediction: Wexford