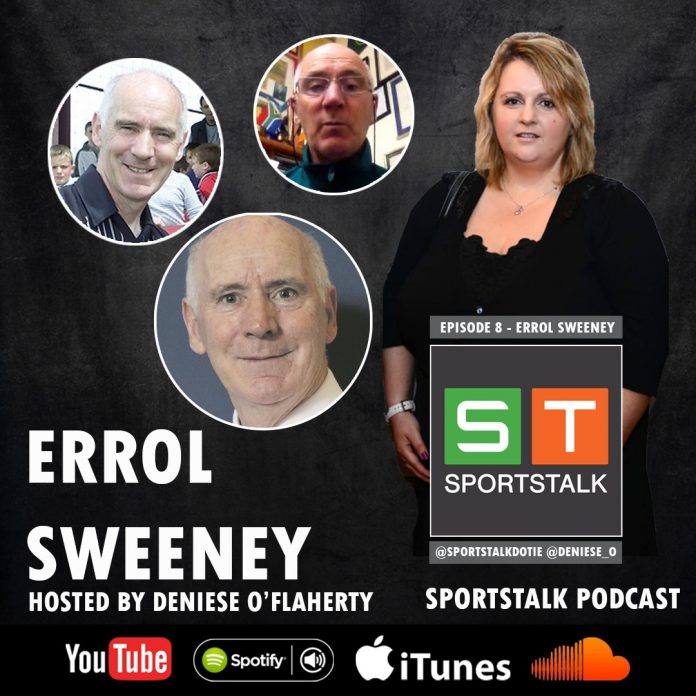 Errol Sweeney is well known in Irish sporting circles. He is affectionately known as the ‘Hanging Judge’. Sweeney had to move away in the 1980’s because of the recession which hit Ireland at that time. He said: “Unfortunately things in Ireland weren’t the best. My older sister was already living out in South Africa, so I was constantly in touch with her. South Africa was hiring skilled people to work and there was very little work here in Ireland. So myself and my younger sister decided we were going to head out. I had been doing a bit of music teaching and been playing in a band and doing other jobs like driving a bus. It wasn’t sustainable. I went out there and fell in love with the place and ended up coming back in the mid 80s and living there for over 15 years.” Errol’s journey into refereeing came about in an unusual way. He told Deniese: “Well music was my main love. I was in a band at the time and doing my piano exams. I used to get John Carpenter, who was one of Ireland’s best known referee’s up to sing. After one of our gigs in Finglas, he asked me if I would be interested in becoming a referee. I didn’t initially think it was for me. I was playing football at the time, but I decided to give up the football and take up John’s offer. I joined the local branch, here in Drogheda and it just progressed from there. I go all in on things. In 1975 I was promoted to the FAI. It wasn’t a full-time affair, like in England. When I went to South Africa my progress on the ladder was local games, because South Africa was banned from participation at international level at the time.”

Sweeney was determined to continue refereeing on some level, when he went to the Southern Hemisphere. “I did my homework. It was a case of writing letters. I had done some prep work over there in 1983. I was given three games over the two weeks I was there and I was given good reviews by all teams. I was asked if it would be possible to come back. So on January 13th 1985 I flew back. There so happened to have been a referee’s seminar at the end of the month. Obviously it was summer there and winter back in Ireland. The league started in early March. The pre-season tests were done at the seminar, everything from written tests to fitness tests and I passed them all. I was thrown on the line initially, but then by chance I was given a quarter-final of a cup game. I lived in a place called Cornville, which was 100km west of Johannesburg. It was located closer to Johannesburg and I was never asked to referee a game in South Africa before. I got good reviews from the game. Things like I was a fair and honest guy and I suppose that was something I always tried to be. I progressed locally there and got their equivalent of the FA Cup final in 1988, in Ellis Park. It was between the Kaiser Chiefs and Orlando Pirates, the top two teams in the country at the time. I suppose my other achievements would include being named the Referee’s Referee of the year and then in 1992 I was voted Referee of the year. It went on from there. In 1994 I was asked to retire and look after the coaching of referees in the league, which I was reluctant to do,” he admitted.

In 1996 South Africa formed their own Premier League. Errol said: “The country hired Trevor Phillips, who became Chief Executive. He was an Englishman, known out there as the ‘British Bulldog’. I remember there was a lightning strike at Durban Airport and a referee was due to take charge of a game. He couldn’t make it so I had to arrange for another referee in the area to go and cover the game. Trevor wasn’t impressed with the other referee not showing up. I re-assured him that the league and its organisation of games was to blame. The man would never have made it from arriving in Durban at 5 to an 8pm kick-off time. As a result of that Trevor asked me to come for a meeting to discuss working for the league and that was it. Something as simple as that opened a door and luckily for me an opportunity opened for me.”

Sweeney got to referee clubs from England. He said: “So at the time the South African ban was lifted and the President was a much more pragmatic and liberal guy. South Africa decided to invite two teams from Europe to play in a football festival as it were. The visiting teams played each other first. Arsenal and Manchester United came out having been hugely successful domestically in the previous 1993 and 1994 seasons. I took charge of the game and I said to both Alex Ferguson and George Graham beforehand, the same laws of the game will apply, so tell you players to behave. Ferguson actually said to me, if you have any problems with my players give me a nod and I will take them off. It was the first time Roy Keane had played for United and there were many famous players on show. I still have the list of players on a scrapbook. For Arsenal you would have had the likes of Ian Wright. He was a nice guy. The game was tough, both teams were getting stuck in. I booked Paul Parker who was a right back for United. Ferguson ignored me and I thought to myself the gloves are off. I never refereed a so-called ‘friendly’ game in my life. They were always unfriendly. United were shouting for a penalty, after an Arsenal player put his hand up to protect his face. I waved play on. Bryan Robson ran past me and called me an f-ing cheat. Rule 12 states any mis-conduct against an official is an automatic red card. So I had no choice but to send him off. I got slated for it. Nobody knew what happened. It made world news. I was asked by the South African FA to come to a press-conference with Robson and I agreed. I said I wasn’t apologising or withdrawing the red card. Bryan didn’t show up. I was a type of referee, where I applied the rules no matter what the circumstances and I think that is only fair.”

Sweeney has a definitive view on his refereeing style: “I will never criticise what refs do, I will only look at what they are not doing. I have no problem telling people why I did this or that, but the problem is one question can lead to another, then to a discussion and an argument so you have to be careful. I feel I can explain one answer, but I don’t want to have to be constantly defending why I gave this in a game. I do journalism myself and I understand. I agree with the rule of never letting the truth get in the way of a good story. One answer should be enough to justify your actions, otherwise it can become dangerous. I would be in favour of a Referee Liaison Officer, who goes to conferences and speaks on behalf of the referee.” Sweeney also believes that officials are constantly being put under the microscope: “Of course there is a trial by media approach. You see 30 cameras at Premier League games now. Each individual can be seen on the field of play. VAR is a hindrance. You see the cheating, the deception with players nowadays. It is beyond ridiculous. What I feel is that the referee’s are allowing this to happen. They should book the players more. The first thing you will see is a player will go over and then grab the ball, so that the opponent cannot play on. It is wrong. Too much of this stuff is destroying our beautiful game. I have seen Raheem Sterling trip himself. Outrageous stuff. There is a winning at all costs mentality out there unfortunately. Their managers are even supporting this type of behaviour.”
Honesty and integrity are factors associated with Sweeney in his career to date. He said: “I believe if you sell your honesty, you sell your soul. You have nothing left to prove. The 3 things that are important in life are your honesty, integrity and hard work. They are intangible to your success. That is what I always tell the referee’s that I coach. One of my students was a referee in the World Cup finals in France in 1998. I have had referees take part in Olympic games and numerous other World Cups, which has been a highlight for me. I am effectively 50 years involved with refereeing, and I can say that I am as passionate about it, as I was when I started, if not more so. I love helping people improve their skills. I write my articles. I have started my own Monday night show on facebook ‘HangingJudgeRef’. That name came from a match I was involved with in South Africa. The hanging Judge was a name that was mentioned in a sub heading of a newspaper and it stuck with me ever since. I take it as a compliment. I was a no nonsense referee. Sweeney also has a major in ADD and ADHD in psychology. He admitted: “It covers stress and youth development. I had an interest in what people did and the way they thought. The mind is a complex process. The secret of a psychologist is to let people talk and listen. Look and listen as twice as much as you talk. You never know what people are going through. It is all about dealing with people and allowing them to take the weight off their shoulders. What is sad is that the people who take their own lives are at peace with themselves.”

Errol Sweeney is a lover of life as well as sport and music and this is clear to see from listening to his stories. “I love all sports really. Basketball, Cricket, GAA, Rugby and Athletics.” No doubt Errol Sweeney will continue to have a positive effect in the realms of sport and psychology for some time to come.