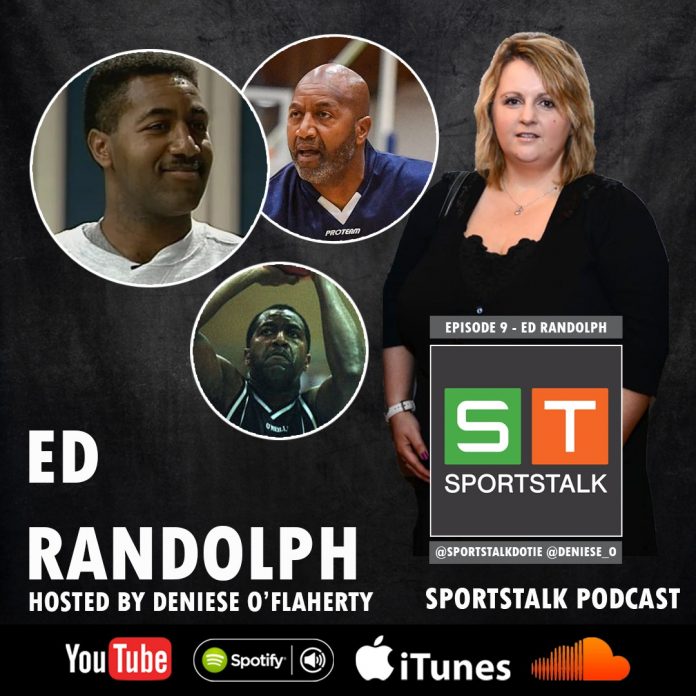 Not only is Ed Randolph well known for being the father of Irish soccer goalkeeper Darren Randolph, he is well known for his impact on basketball in Ireland and is one of Ireland’s finest exports. Originally from Florida in the US, Ed talks about how he came to Ireland initially. “I would have come to Ireland in 1982. I would like to set the record straight and say I would have been the second wave of players that migrated to Ireland. Paidi O’Connor, a Kerryman, would have been a huge figure in getting players from abroad to play in Ireland. He was a lord mayor and had a certain way about him. My journey to Ireland began when I moved from Tallahassee to Rhode Island. All I could think about from a very early age was trying to get a scholarship. Unfortunately in the states you need one and my family would not have been able to afford to send me to pursue my dreams by themselves. My family were quite an active bunch. All my brothers and sisters were active and athletic. I went to Roger Williams University, which was right on the coast, a beautiful place. They retired my jersey when I stopped playing, which was a nice touch”. In terms of Ed’s exposure to different cultures, he believes this happened more explosively at Uni: “ I met people from many backgrounds. People from Poland, Italian, Christian and Jewish, the college was a quite diverse space, considering where I had come from in Florida.”

Randolph ultimately made the decision that the NBA wasn’t a realistic goal and decided to play overseas. This brought him to Ireland. He said: “Well realistically only a small pool of people make it to the top in America. I remember I was working part- time in a nursing home and playing summer league basketball. A referee said to me would I be interested in travelling to play pro basketball abroad. He mentioned that there were scouts at our game. Normally they would have been from Germany, Italy or France. This was when I got talking to a scout Fergus Woods from Belfast. He mentioned that I had the attributes he was looking for. The club at the time was called Sporting Belfast. I was eventually selected. I remember telling my brother, he was in college at the time and he asked me if I knew the difference between Northern Ireland and the Republic? At the time there were bombings happening in Belfast and there wasn’t many black people living there. I had a tough job getting my mum and dad on board. My dad didn’t want me running after a ball for a living. He wanted me to get a 9-5 job. My mom was a typical caregiver. I was the youngest in the family and she wished that I could have found a team closer. Fergus Woods re-assured me that everything would be fine and that was what brought me here. I am grateful I met my wife here and love Ireland.”

Ed acknowledges the fact that he took time to adapt to Ireland: “Of course. I was apprehensive about coming here, but I was also excited. I got to adapt to a new culture, a new way of people. It was exciting to get paid for playing the game you loved, but as one of the main guys on the team, you did feel the pressure. In terms of Belfast I had to educate myself on different things. Stuff like what part of the city I was going to, which taxi service I should use and also be mindful of the diverse nature of the city in terms of nationalism and sectarianism. You could see a group of lads with the Union Jack flags going around in SUVs. I do feel that the oppression of the Irish for years was a similar story to that of the black-American story. I suppose I can relate to the history in a way. You got to learn the whole story as time went on. Noel O’ Byrne would have sponsored our club at the time. We were always told when we were in pubs to keep the topic of discussion on sport, as any political stories could be heard and taken up the wrong way. The east coast of America was similar in that their was organised crime, much like the car bombings you would have heard about in Belfast.”

Ed has two sons; Darren and Neil. Darren would be well known in irish circles. He has played in the Premier League for a number of years and is the Irish number. Ed explains how Darren got into soccer: “Actually Darren was very good at basketball too. He decided to commit to soccer very quickly and as parents, we supported him. He played for Ireland U16s. I remember Charlton got in touch with us about getting Darren to get involved with their youth set-up. He flew over there during his school holidays. Eventually things just progressed and at 15, he went over there full- time. As parents we made sure that Darren knew the sacrifices he was making. We had watched the Premier League at home for years, but Darren was determined to make it as a professional footballer. We told him how important education was and so Darren stayed in school for as long as possible. Charlton had a children’s officer and they assured us he would be looked after. He made the U18 team before he turned 16 and went out on loan to a conference side in Bromley, South London. That is where he learnt his trade. Dean Kiely was the goalkeeper there at the time, under Alan Curbishley. Matt Holland was another Irish player who was involved at The Valley. He has done quite well for himself.”

Speaking about his other son Neil, Ed said: “Neil is a smart lad. Neil would have been in the shadows a bit in that he was always compared to Darren and some of the coaches would have put him in goals in GAA, even though Neil wanted to show what he could do outfield. Neil told me when he was 17 that he wanted to try and get a scholarship to the US to play Basketball. I gave him words of wisdom and told him he would have to get studying. We found him a prep school in Florida. He wasn’t offered a scholarship, but we got him into Elmo College and he loved it there. He scored over a 1000 points and graduated with a major in Psychology. After his masters he got into accountancy and is doing very well for himself. I am very proud of both my sons.”

In terms of basketball in Ireland, Ed has been involved with the growth and coaching of the game. He believes the development of the game can still be improved: “In terms of Basketball Ireland, I do think we are on the right track. I have seen our underage girls team making a European final in recent years and there is much more involvement with kids in development squads and at grassroots level. All the way from Cork, Kerry, Waterford up to Westmeath, Longford and Donegal you see it. We need to make basketball more exposing and appealing for kids. TV is a way of doing that. I think facilities are lacking in ways. The pandemic has hurt basketball. I do think that GAA and Basketball have many crossovers. You see the likes of Kieran Donaghy and Linsay Peat playing both sports. They have spoken very highly of the sport, but I think the problem we are having, is that basketball wouldn’t get half the funding Gaelic Games would get.” Ed Randolph has been involved with basketball for over 40 years. His advice for the future stars of the game is simple: “Enjoy it, have fun. Learn the fundamentals and work on them. If you get to a higher level, the level of fun may not be there. As you develop the intensity increases. Remember to just enjoy it. That is the most important thing about any sport.