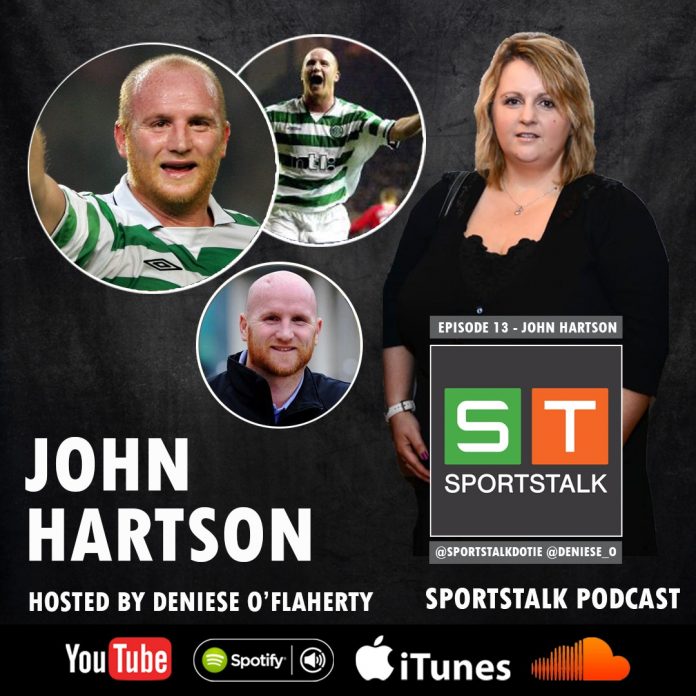 Known as Big Bad John, John Hartson has had an illustrious career. The Welshman was loved for his passion, while at Celtic. Having won 3 League titles with the Hoops, as well as numerous domestic cups, Hartson reflects fondly on his career in Glasgow. “ I always thought there was only one legend at Celtic and that was Henrik Larsson. I am delighted to be considered a legend by the fans. I am very humbled to be honest. I was lucky that I played with many fine players over the years. We won loads of trophies together and my one regret would only have been that my career went very quickly there.” Having scored well over a 100 goals for the club, Hartson was also involved in the club’s run to the Uefa Cup Final in 2003, where they were eventually beaten by Porto. John also won the Player’s Player of the Year award in 2005. The man has done it all.

“To be voted by players you play against week on week, meant alot to me. It is the best award to win. You can’t get a better accolade. Apart from that I would say I took great pleasure in scoring against Rangers. Historically, it was watched all over the world. To score in a game where pride, bragging rights and league titles were on the line meant everything. Those games spilled over as you know. The Old Firm is a ferocious game. The goal I scored against Liverpool was great too. I have a soft spot for Liverpool and Ian Rush was my hero growing up, so I guess that goal was particularly memorable for me. The goal got us through and the fact that I scored in Anfield, where many players rarely do, was particularly pleasing. We played so well and won the game 2-0. The goal in Celta Vigo was special as well. Having to choose out of 110 goals is difficult. I suppose having a great team around myself helped a lot. We had Petrov, Lambert, Larsson, Thompson, Sutton, Balde and Lennon, under Martin O’Neill. We won a lot over the years. Having a great team and manager made my job a lot easier.”

Hartson unfortunately missed out on playing in the 2003 Uefa Cup Final. He does remember the sea of fans who made the trip over to Seville. “There were thousands of fans who went over. I remember hearing a story of a man who fell asleep on a bench. A policeman gave him a ticket and he didn’t have one. It was a great time being a fan of the club. We had a great evening. We gave the fans great nights. Beating the likes of Stuggart, Blackburn and Liverpool, the fans were buzzing. It’s a shame we didn’t deliver the trophy, but that run in Europe will live long in the memory. I missed the game with a back injury and had an operation, which was unfortunate. I don’t know if I would have made much of a difference. I hated playing in the heat.

That night was particularly hot.” Hartson also enjoyed his time playing in London, with both Arsenal and West Ham. “I was only 19 when I went to Arsenal. I have great memories there playing with Ian Wright. That was special to be honest. To have been so young and trained with a team full of international players, was for me unbelievable really. I had a wonderful time at West Ham too, with Harry Redknapp in charge. I played with loads of top quality players. The likes of Frank Lampard, Rio Ferdinand and Trevor Sinclair were great and to be managed by Harry, you learnt a lot. My one regret would obviously have been my row with Eyal Berkovic. I look back and wasn’t proud of how I acted. I accepted the fine and ban and moved on. I am glad I was able to still score plenty of goals for West Ham.”

Hartson loved his time in England and believes that Ian Wright helped him a lot. “Yes Wrighty took me under his wing. I played with him at Arsenal and West Ham. He helped me settle as a player and we still remain great friends. He was 29 when I arrived. I supposed I played under a lot of managers as well. It could have 15 or 16 different managers and they were all great, but different. The likes of Mark Hughes, John Toshack, Martin O’Neill, Harry Redknapp and Arsene Wenger to name but a few. No managers do the same things. They all have their different ideas. I have had a few experiences with coaching and it is something I am looking to get into at some point. Having so many managers will help me, I hope.”

Hartson also played for Wales on the international stage, but retired quite young, at the age of 31. “Gary Speed, Ryan Giggs and a host of players had retired. I was then the senior player and we got a whole host of young players under John Toshack. I didn’t really feel like I belonged; so that led to my decision to call it a day. He was a great manager and person. I could have had 70/80 caps, if I had committed to the set- up for a few more years. I suppose there are always those ‘what if’ moments. We all get them.”

Hartson had a health scare when he was diagnosed with testicular cancer. He looks back on what that experience was like and how he got through it. “ Yeah it spread to my brain, at one point. I was very ignorant of my health. I would be an advocate for telling young men to get it checked as soon as possible. I was very naive of my health and it nearly cost me my life. I wrote a book 10 years ago about my experiences. Hopefully people will have read my story and it can help others to act quicker than I did. I spent 6 weeks in the hospital. I was sleeping alot and on a lot of tablets. I was very emotional and devastated. It was hard on my family; my wife and kids. It takes good people away. I was heavily sedated. It took a lot out of me both physically and mentally. I didn’t know if I was going to be strong enough to get through it to be honest. I got through that, thank God. I would be a positive guy and I suppose that experience has made me stronger. I feel invincible now. I hear people saying that they have beaten cancer and will not ever worry about anything ever again. I suppose life goes on. My family played a huge role. My wife was pregnant at the time. My dad stayed with me overnight sometimes. They went over and above for me. My mum and dad were huge during that time. My wife was incredible, even though she found it tough. It is very important to have that support, during a time like that.”

Hartson’s friend Jackie McNamara also has scars from a head injury he sustained. “Well look we both have them, but the good thing is we can smile and get on with things. Petrov also went through tough times. The good thing is we have all come through it. We have come out stronger for it. I used to room with Jackie when we played together. He does agency work now and is very much a big help to me. In my book that I wrote I talk about many experiences in my life that shaped me and I would hope that people would maybe learn something from decisions I made. I was as open as possible. People would have come up to me and said if I hadn’t seen a doctor, I might not be here. Others would say, “you saved my life”. That is why I wrote the book to begin with. If I did save somebody’s life, it was all worth it. You have to be honest; cancer is very serious. I wanted people to know how serious it was. I am open about my gambling addiction too, but I have come out the other side 100 percent. I am coming up to 10 years of being gambling free. October the 5th and it’s my mom’s birthday. 2011 was the last time I placed a bet. You got to look at yourself in the mirror each day and be strong and that helped me come out the other end really. I got the help I needed and my family played their part.”

Hartson offers his advice on getting help: “In terms of mental health, I would say talk about it. A problem shared, is a problem halved. Speak openly, go to somebody. You should be credited if you ask for help. We all need help in various aspects of our lives. There is no shame in asking for help.” John is now a commentator and he feels you need to be clever in your approach. “You have to be clever. You have to be smarter and more streetwise, otherwise you could be out of a job. You have to go on and know what you’re talking about. I enjoy going on and I love watching the women’s game, it is great to see. I have 4 daughters, so obviously I relate to it on that level I guess. I am surrounded by girls. I would love to see one of my daughters one day get involved with punditry. Sometimes I think to myself will I last in the media. There are thousands of ex footballers trying to get into the area now. I feel it is important to have something else up your sleeve. Sometimes I think to myself what am I going to do for the next 30 years? Whether it’s property, music or business you need to have a plan B. We are not all Gary Linekers. You have to be realistic, as your money can dry up very quickly if you’re not careful.”

Hartson is delighted for West ham and is hopeful for Celtic going forward. “It is great to see West Ham have qualified for Europe. I am delighted for the fans. Celtic don’t have a manager at the minute. It is an institution. People just want an announcement at this stage. The rumours keep on rolling. The season for Celtic was quite poor to be honest. The fans will buy into it again and hopefully we can rebuild. Stephen Gerrard has done a great job. He stopped our 10 in a row aspirations. Credit is due in fairness. Celtic have got to respond in a big way to produce next season and let’s get that title back.” Hail Hail.

Hartson’s legacy in Celtic is most definitely reserved and he will go down as one of the finest Welshmen to have ever worn the famous green and white jersey.