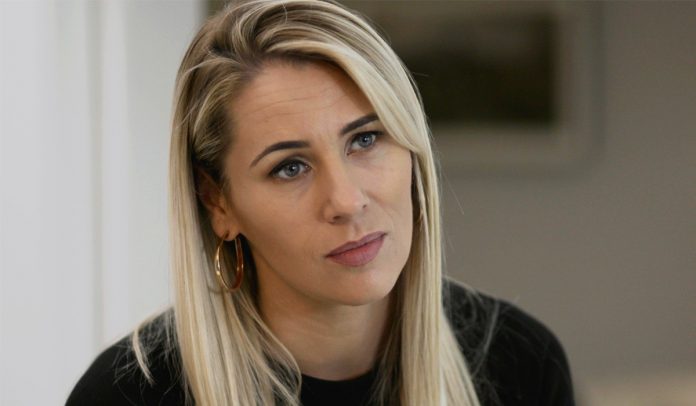 Deniese recently caught up with well known RTE Sports Broadcaster Evanne Ní Chuilinn to talk about her career to date. Evanne is a proud Kilkenny woman and her passion and love of sport, particularly GAA is evident to this day. However she has had to turn her hand to homeschooling her kids in recent months. “Homeschooling isn’t fun. I can’t say I did loads of it. We’re not teachers. We’re parents, so I think that if we are keeping them happy we are doing our jobs. We are parents, so to take on a role of teaching our kids is a totally different relationship. They don’t want you to teach them, they want their teachers. My sister is a teacher so she video called my son and kept him going. I can’t say I lost much sleep over it if I am being totally honest with you. My sister had covered the work with my son, so he wasn’t falling behind. I think the stress of doing it was harder for people more than doing it itself. My other child is only still young, so it didn’t impact on her so much. I think the hardest part was being at home with the 4 of us, all day every day for the best part of a year. You would be doing well to get an hour of work done at home if I am being really honest. We really missed seeing people and sport. My son turned 9 recently and found the Easter break tough. He had only been back two weeks. THe kids just missed being with their friends more than anything. They don’t know how to express our frustrations. It has been hard for everybody,” she said.

Growing up in Kilkenny Evanne always had a love for sport from a young age. She said: “I tried every sport growing up. I played camogie in school, I tried tennis, athletics, swimming and basketball. I was probably better at basketball more than camogie at the time. I danced as well. When I moved to Dublin I joined a camogie team. It is a great social outlet and it brings people. I try to keep my kids active in sport and they love it anyway. I loved the participation of it. It is great to have them. It helps social skills. There is a sport for everyone. I would even class ballet as a sport. We need to become better at exposing kids to all sports. You do need people to bounce off outside your home. It is obviously good for your health and mental health. Gymnastics is also great. It is good for your hand/eye coordination and flexibility and core.” Evanne loved sport, but initially she wasn’t 100 percent sure what career to take: “I don’t think anybody really knows when you’re 18 years old what you want to do when you’re 30/40/50. The idea is ludicrous. I think we should be brought up with the idea that there are two or three careers in us and that is ok. Our career guidance teachers, I feel, should be teaching this to our kids. I was really good at languages.”

She went on to say: “My parents were both teachers. I knew I could be good at teaching, but then I did a bit of teaching practice and It wasn’t for me. I was contemplating a broad course so that I didn’t have to make any decisions straight away. I did Communications in DCU in the end. I did Radio Production as a major. I went in with an open mind. I then went on to do Journalism/Radio with Irish in Galway. I asked could I do a sports placement. So I got it. I got on The Underdogs on TG4 in 2004 as a result. That is where it started. I just kept going freelance. I wrote letters to RTE. I didn’t put all the eggs in one basket. It just happened all quite organically. I then got into the sports department in RTE and got into presenting and never looked back really. I love it. I love art and music. So I could have ended up in anything really. You get a lot of knockbacks along the way, but you gotta keep going. It isn’t as glamorous as what everybody thinks. It is important to put in the hard graft. I worry about the next generation. People are getting famous from Instagram. That is all well and good, but I feel you can never beat the hard work. It isn’t great for our kids. Insta-famous I don’t get it.”

Evanne remembers fondly her experiences on air: “I remember my first communications bulletin. It was a 90 second slot. It was with 2FM. My heart rate was through the roof. I don’t know how I got through it. I was rushing it. I think I messed it up to be honest. I think the few years behind the scenes and editorial sets you up for the radio and tv world. That is what I mean when I talk about working your way up. I went from the radio into tv. I got more comfortable. I did a show called OB Sport. It wasn’t live. Which suited me. I think the first time I was live on tv was like the League Sunday Show. I remember sitting on the coach and thinking, breathe. I think nerves are good. If you’re not nervous you’re not ready or you’re not on your toes. I think there is a fine line between crippling nerves and butterflies and it is important to know the difference. Breathing is important. Another tip is don’t think about everybody watching. I imagined talking to one person behind the camera and not one million and almost making it conversational. I have gotten used to it. I would just imagine talking to my parents at home. That is just my style.”

Evanne has covered many important events over the years. Everything from the Camogie All-Ireland Finals to the Olympic Games. She said: “There are so many highlights. The 2009 Grand Slam in Cardiff was huge. It was my first big story outside of Ireland. I was sitting beside the Irish subs bench. I loved the 2016 Olympic Games in Rio. It was my first games. It was hectic. Interviewing Michael Conlan after his controversial defeat, to the O’Donovan brothers. It was a very high-pressured environment, which I thrived on I suppose. I had some funny moments. You just go where the story is. I loved the world Rowing Championships in 2017. I got to work in Florida for the week and that was a very fun trip to be involved with. You were up early. The weather was great. In the afternoon we got to go on the beach. All-Ireland Final day is always amazing. The Camogie final last year at christmas time was great. It was my first time presenting a final and having no supporters there was obviously strange. It was just a privilege to be there. I also presented the hockey qualifiers when the Irish women’s team qualified for the Olympics which was great too.”

Evanne has a love for all sports and that includes American Football, which many people might not have known. She said: “The Green Bay Packers, is a team I follow. I would have gone to lots of places to watch the Super Bowl over the years. Myself and my husband love it. We bonded over American Football. We watched it more. I got my husband an Aaron Rodgers jersey one year. He was a superstar on the team. The club is owned by the supporters. It appealed to me. We stuck with them. The kids are involved as well. In December 2019 we went to two games in Boston and Wisconsin. That is where the love of the Packers came from I suppose. We came back to lockdown which wasn’t great. You take the fans for granted. My work meant I experienced it a lot more than others over the years.”

Evanne has another love in the Irish language. It is something she treasures and has passed down to her children: “I was exposed to it. My kids go to a gaelscoil. We don’t speak it all the time. I think it is a good option to have. They can make up their own minds if they want to continue it on, but it is good to have that option available to them.” The Kilkenny native has a new show out at the moment. She said: “I have a show that involves talking to people about their different jobs in sport. I decided I am going to do it over zoom and turn it into a podcast. I can put it onto Youtube as well. I had been thinking about it for ages, so I said I am just going to do it now. Obviously some people want to work in sport, but don’t have all the right skills. Some people aren’t good at public speaking or data analysis, so the show highlights what people do and what it takes to do specific jobs within the sports industry. There are so many ways to make a living from sport as well. It will shine a light on people who don’t get enough recognition in sport because they are not known. So if you have a love of sport, there are jobs available in the industry for you would be my message. It is based on people of all ages and all levels, so hopefully it will help people who want a new start and who are interested in following their dreams.”
It is fair to say that Evanne Ní Chuilinn is the epitome of dedication to her craft and if anything that if you have a love for sport, take a chance and run with it.

My head says Kilkenny but my heart says Waterford – Tom...