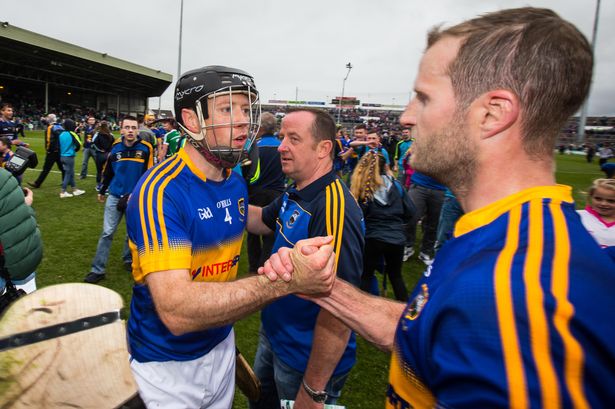 What is your Favourite……. Song to listen to before a game – Not a man for the iPod or Walkman but 2 songs used to be played on buses to matches, Something Inside so Strong and ‘Redemption Song’

Medal won – U21 West Championship Eire Og 2006, as a group we won nothing up along and to finally win a Title with the lads I grew up with was really special. A game that has been played out in a many a pub around the parish since. It was also a re-incarnation of the Hell’s Kitchen full back line with the 3 O Dwyer’s, it was dangerous to play with them never mind against them.

Radio show you listen to: Ian Dempsey in the morning as much as I can

Crowe Meats Sausages and Rashers for breakfast, Chicken and Pasta pre match and probably Pizza or an Indian after

Seamie Callanan 2015 vs Galway, nearly won that game by himself for us. Two with club, 1) brother Ronan vs Moneygall 2007 relegation semi final, scored something like 12 points on a losing team 7 or 8 from play and 2) John Quinn vs Moycarkey 2006 County Intermediate Final scored 2-4 at the tender age of 41. Still going strong at moment training with Senior team at home but in fairness why wouldn’t he, he’s only 52 during the summer.

I would be very romantic in fairness??but it would be as simple as getting out for the night, nice meal and few glasses of wine, it’s the simple pleasures.

None, fine the way it is.

Brian Fox could easily have played senior hurling with Tipp

Team mate mostly likely to have his own TV show –

Probably skip dinner and a few pints with Klopp, Mourinho and Ferguson would be good craic I’d say

Your man running naked into the glass screen is brilliant

A teacher, would be like a half day for the rest of us.

Most embarrassing moment playing hurling – I got an awful roasting one day in Nowlan Park off Colin Fennelly and I was fairly embarrassed about it now. Although in fairness he got one goal where I ran for a hand pass from Shane McGrath but instead of hand passing the ball Shane decided to put up a ‘garryowen’ with his trustee left boot from the end line as all good wing backs do. I didn’t anticipate the ‘kick and chase’ and Fennelly caught the ball inside the 14 and buried it in the top corner and I was taken off shortly after. From that time on anytime Shane McGrath got the ball I was ready for the ‘garryowen’ but I can’t for the life of me figure out why he never tried it again?

Shane McGrath for the laugh, Brendan Maher for the music and Gar Ryan to give him a hand with the idea for the TV programme

3 team mate you wouldn’t bring to a desert island –

Noel McGrath, Bubbles and Eoin Kelly, I’ve hit them all too many times in training and I’m afraid they’d gang up on me

Looking back on it now, I remember one year we were having our last training session before we played Kilkenny in an All-Ireland semi-final and the manager came up to me when we were pucking around before training. He told me I will probably be picking up Shefflin on Sunday. I just said yeah I’m looking forward to it now, but they move around a fair bit so could be on anyone. He’s reply to me was ‘well if I was them that’s where I would put him’ and just walked off, done my confidence the world of good I must say.