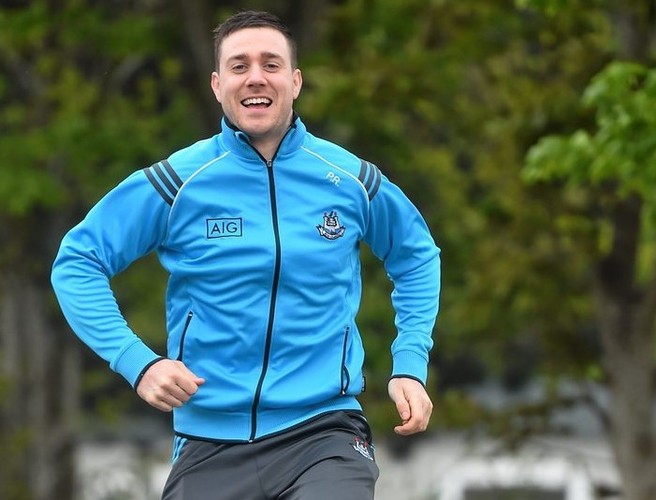 County jersey (not your own) – Tipp

Song to listen to before a game – the Foggy Dew

Hurling cliché – “he took the sensible option” i.e. he tried to burst the net but it went over the bar!

What did you eat on the day of a big match?

Nearly 3 litres of water consumed throughout the day

Did you eat a big fry up before a game before, if you did how did it go?

No never did. If I eat that stuff it is like eating expansion foam! I have a tendency to winter well!!

Advice to young players starting out on their inter county career?

Listen, learn and take risks on the pitch. Don’t be afraid make a decision and back yourself 100%.

What do you miss the most about being an inter county hurler?

I miss the really tough training sessions believe it or not and playing at the top level. I will miss playing in Croke Park every year.

What would you do different if you had a chance to start over again?

I wish I looked after my fitness and diet a lot better from 18-22. I really took it for granted I nearly got dropped before the 2011 inter county season because I ballooned in the off season due to a hamstring injury and not watching what I was eating.

If you could go back to one inter county game, which game would you go back to and why?

Semi Final of the All Ireland vs Cork 2013. I missed frees that day that haunted me for 2 years before I came to terms with it. We never got to an All Ireland Semi again so I couldn’t rectify what happened. Or the 2013 Leinster Final, I felt I couldn’t miss that day, those days are always enjoyable!

Simon Lambert and Shane Durkin with all their snaps of food DAILY!

Tollier. He has no filter!

Who is the best manager you ever had? Why?

Anthony Daly. From where we were previously to his introduction Dalo had the ability to make you believe you belonged with the top teams but also instilled a belief in the team that we could beat the best as long as we performed. You had to earn your start and he definitely made you jump through the hoops before you got that chance. We had our rows with each other but he was great at keeping you on side and believing in the cause. Without a doubt the greatest manger I have ever had.

Brendan Treacy (son of Eamon Treacy (the pride of Cappawhite!)

Which county team-mates did you hate marking in training?

A few! Niall Corcoran, Paul schutte, Cian O’Callaghan, Eoghan O’Donnell. A good hurl is wasted on those boys as it’s never used to hit the ball!!!

Very Simple. My Dad would always preach “if you want anything in this life, you have to be prepared to work for it. It won’t be handed to you”

Funniest thing you have watched on you tube –

Tom Brady, has it all from what I can see!

Did you get nervous before big games?

God I don’t know. I get enough abuse about it so probably the guy who liked to shoot a lot!

Couch and water. Endure the pain and watch a Disney flick to keep the wolf from the door!

Most romantic thing you have ever done?

I have been told I am not a natural in this department but Shane Durkin wrote the book on romance so I might take a few tips from him!

I always liked to do prank phone calls when we were away on training camps. You would be bored at night time so we needed create a bit of craic. Other players were always the target but we would swiftly move on to the management. At the time the management team consisted of Dalo, Richie Staklum, Hedgo, Tommy Dunne, Michael Carruth, Ray Finn, Physio’s Eamon O’Reilly & Enda King along with Jenny Coady who was our Video analyst. A great team to say the least but prime targets presented themselves in Carruth and Dunne!

The Olympics was only around the corner so I rang Carruth first, put on a strong English accent and told him it was “Tommy Carlisle from Sky Sports and we were ringing to see if you would be on the Sky Sports panel to talk about boxing of course”. Carruth calmed himself and said “why don’t give me call next week and we can discuss in more detail”. Tommy Carlisle (me) said “of course Michael take a few days to think about it but we can go through the pay package and all that next week”. Carruth says “perfect Tommy I’ll talk to you next week”. With that I hung up and the 12 or so lads around me fell of the chairs laughing. I said “do you really think we have him?”………..they were convinced of it. So we texted Dalo and Richie along with Hedgo and Ray to get them in on the act. The lads reported back that after the call Carruth sits back down and says with a new found confidence (not that he lacked it!) “that was Sky Sports there boys, they want me to join the boxing panel for the Olympics coming up”. Of course Dalo and Co fed the illusion saying “jesus Michael that is a serious gig fairplay”. Carruth responds “Dalo I’m very media savy me, been at it years”.

To cut a long story short Jenny had filmed me doing the prank call and put a little video together. At the end of training camp Dalo said he has something to show us before we departed so led us all into a room where a video started playing on the T.V. It didn’t take long before Carruth realised it was Tommy Carlisle/me on the T.V who called him! Of course he denied we got him badly and still denies it to this day!

We used to do a lot of boxing training with Michael and needless to say he made me suffer in particular!