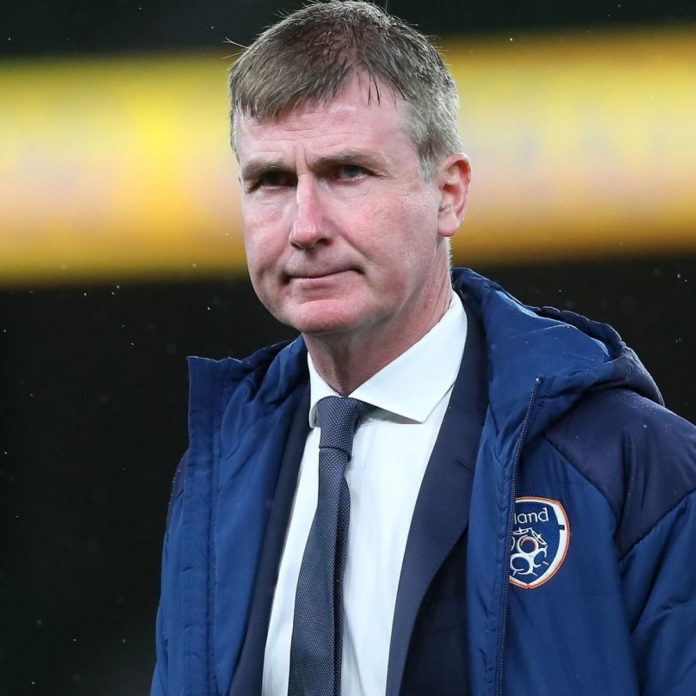 The FAI have announced that Stephen Kenny has extended his contract as Republic of Ireland manager to the 2024 UEFA European Championship campaign.
The agreement was negotiated successfully by FAI CEO Jonathan Hill after talks with Kenny. New contracts have been agreed for Assistant Manager Keith Andrews and the coaching team of Dean Kiely, Stephen Rice and Damien Doyle. Stephen Kenny will appoint an assistant coach in due course.
Speaking about the contract Kenny said: “I consider it the ultimate honour to manage my country and I am delighted to extend my contract. The players are incredibly proud to play for Ireland and in recent performances we have witnessed a powerful connection between the team and the Irish supporters. The attitude of the players has been exceptional, we have seen the team grow and develop and I, together with Keith Andrews and all of the staff, look forward to seeing the team fulfil its potential. With the recent return of supporters to stadiums, I want to acknowledge the importance of the passionate Irish fans both home and away. Finally, I want to express my appreciation to Jonathan and the Board of the FAI for sharing our belief in the International Squad.”
The Dubliner took over as Republic boss in 2020. He is one of the most successful domestic managers having started off his career with Longford Town in 1998 and guided the club to promotion for the first time in their history.
FAI CEO Jonathan Hill was delighted that a new deal was arranged with Kenny. He said: “On behalf of everyone at the Association I am delighted to announce this news today. The Board gave me clear instructions to agree a deal that sees Stephen in charge for the upcoming UEFA Nations League and Euro 2024 campaigns at a time when there is so much excitement about the future of this young and emerging Ireland squad. Stephen and I have agreed on that deal now and we look forward to working together as he seeks to guide Ireland to the next European Championship finals.”
President Gerry McAnaney said: “There is real optimism amongst the Irish football community about the future direction of our international team. We share that belief and we look forward to continuing the journey with Stephen and his staff and players. On behalf of Irish football, we wish them all the very best of luck going forward.”
While FAI Chair Roy Barrett added: “The Ireland fans have already shown their commitment to this Ireland team with record season ticket sales and I am sure they will be delighted by this news as are all the FAI Board. It comes at a time when the return of League of Ireland football has engendered great interest and excitement. Stephen and many of his players had their grounding in our League and grassroots game and we look forward to many more of these players emerging into our national teams in the years ahead. Like those supporters, we believe in Stephen and in his players and this contract extension is a show of faith in the future of Irish football.”