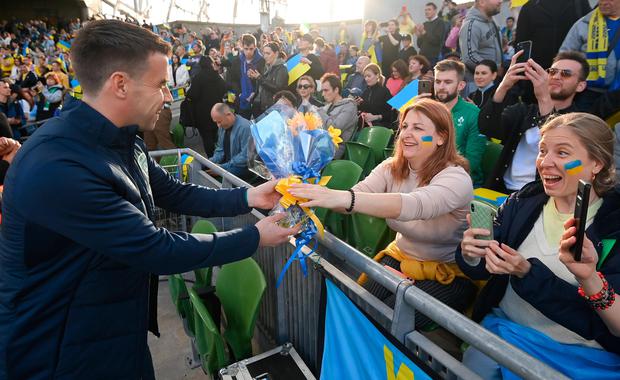 The late, great, Jock Stein once said “football without fans is nothing.” Last night at the Aviva Stadium I witnessed supporters coming together as one for the people of Ukraine.
The FAI gave out over 3,500 tickets to Ukrainian refugees and there were a few more supporters scattered about the ground. Of course people had to begrudge these people tickets, well the ones that like to moan did. These people are after fleeing from a war; left their homes, families and friends, to come live in a new country. I’m sure they’d love to have watched the match from the comfort of their own homes, not at the Aviva.
The excitement on the faces of the children there was wonderful. They were getting to see their heroes and for 90 plus minutes they were able to forget about their troubles. The enormity of what is happening at the moment was evident when the Ukrainian players came out with their flags wrapped around them. It was power but it was a symbol, that flag, like our own tri-colour, meant everything to those players.
Irish supporters always respect the opposition’s national anthems, but the Ukrainian one was met with a rousing round of applause. It made me proud to be Irish. There was a minute’s applause too, before the game. That’s where the pleasantries were supposed to end.
People have opinions and that’s the great thing about life, you can have one and should be respectful of other people’s opinions, if they vary from yours. I like nothing better than having a debate with someone.
The performance of the team in the last two games has been poor. We looked sluggish. The goals we have conceded have been poor, from our point of view, and we can’t score. No disrespect to the players that don the green but there are very few playing at a top level regularly.
Looking back to even a few years ago under Martin O’Neill we had players in the Premiership and those guys were scoring goals too. We lack that cutting edge. There is talent coming through but we need to be patient; that’s something that a lot of supporters find hard.
I thought Nathan Collins was superb last night and was my man of the match. It’s no wonder clubs are looking at him following Burnley’s relegation from the Premiership.
I saw a few comments from supporters about bringing in the U21s. There is a big jump between U21 and senior and at this moment in time our young boys are in contention of qualifying for the European Championships for the first time in our history. Jim Crawford deserves his strongest squad.
During the game I got a text about a young mother who is sick at the moment. For a moment the game was insignificant. But then the scenes at the end and in the press conference afterwards with the Ukrainian manager Oleksandr Petrakov, I realised how important sport can be for people. It’s a way of forgetting your troubles for the duration of the game etc.