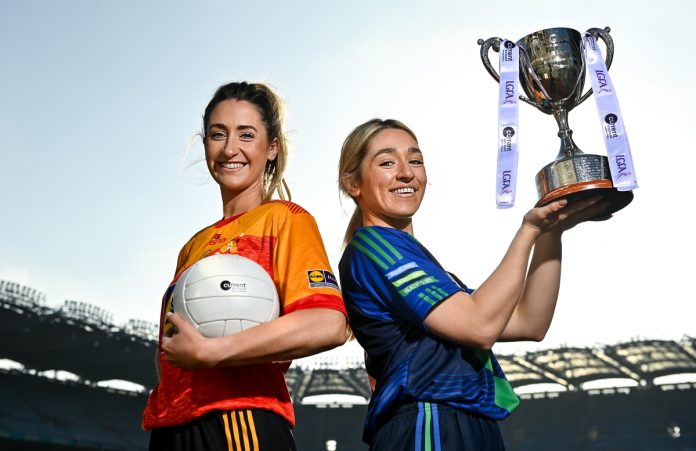 It certainly has been a memorable couple of months for St. Sylvester’s. In November they won the Dublin Intermediate Championship to secure promotion back to the senior championship and then in December claimed a first Leinster title. Now they have an All-Ireland final to look forward to on Sunday when they take on Mayo side Castlebar Mitchels in the All-Ireland Intermediate Football Club Final in Ballinasloe.
For Syl’s it’s uncharted territory but captain Danielle Lawless admitted they are buzzing for it. “Definitely unchartered territory. I think 10 years ago, I wasn’t on the team, but the girls made it to a Leinster final. And that was huge but we’ve never got to an All-Ireland series level, let alone the final. Definitely new territory but we are all buzzing for it.”
The village of Malahide have certainly got behind their team. Lawless said: “There’s ribbons around the village. Bunting. Anybody you walk by they are wishing you the best of luck so it’s really good.”
For a while it was a struggle for Sylvester’s and things didn’t go too well for them on the field of play. Lawless believes covid was a blessing in disguise. “I suppose we were kinda struggling with numbers. We had a few people leave the team; people going away, people working. I just don’t think the commitment was there. I just think covid was a bit of a blessing in disguise maybe. People got a break from football and the disappointment and we came back fresher than ever. This year has just been unbelievable.”
The Dublin side brought in a new manager – Anthony Cooke – and he certainly has made an impression. Lawless said: “He came in with new ideas. It’s something that we all kinda needed. He has just been phenomenal. The hard work that he’s put in on and off the pitch. He’s been definitely a good thing for us.”
Sylvester’s have plenty of experience in their side and a number of county players to call upon. Having players like that is a huge boost to them. Lawless said: “Just the experience that they bring to our team. New ideas. They are always willing to help the girls and it’s really good to train beside them. They improve us and I think when they’re gone, yeah we miss them but when they come back we all compliment each other so it’s massive to have. It’s massive to have five superstars on the team.”
Ladies football in the capital has been on the rise in recent years and it’s a testament to clubs like Sylvester’s who have put so much work in and off the field. Lawless said: “When I think back when I was younger there wasn’t that many girls teams and just year by year you can see more of the younger girls getting involved. The nursery is huge. I think one of the girls said that our club is now 48% women, 52% men which is a huge thing to have. I think it’s definitely on the rise.”
It has been a long but memorable journey for the Dublin champions and Lawless is hoping it ends with an All-Ireland title. She admits she’s trying not to think too far ahead though: “I suppose we haven’t really thought about it. Winning the All-Ireland semi-final hasn’t really sunk in yet and I don’t think it will until that whistle blows and we’re standing on a pitch in an All-Ireland final. It would mean a huge amount to our town. Winning Dublin and Leinster, the support was phenomenal and I know that’s going to continue now until the final. It would mean a lot to the community but definitely the girls as well. We’ve never been here before.”

The journey has also seen the team grow even closer. Lawless said: “As a team we’ve all gotten a lot closer. We’ve all gone through this together. It’s been really good.”