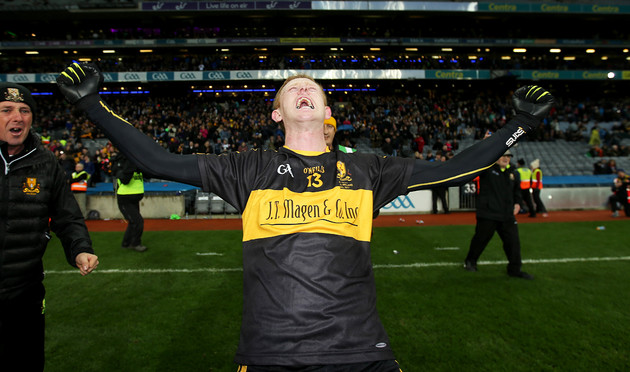 Cuala made history on St Patrick’s Day becoming the first team from Dublin to win the AIB Senior Club Hurling title. Cuala were far superior to their opponents Ballyea from Clare, who incidentally had former of hurler the year Tony Kelly in their ranks. The interesting fact from the game is that Kelly failed to score, not many games that happens! Full credit must go to Cuala though who were superb throughout the game getting some beautiful scores.

One of the best footballers in Ireland Colm Cooper guided his club Dr Crokes to an AIB Senior Club Football title at the weekend and who could say he doesn’t deserve it. Gooch has won it all and to still play the football he does at 33 years of age says it all. The club All-Ireland was the only medal missing in his magnificent collection of 5 All-Ireland’s, 8 All-Stars, 9 Munster titles and 4 National League titles, not to mention 6 county titles and 5 Munster club titles. He can now add the club All-Ireland to this. An amazing player and an amazing ambassador for the game.

Jim Gavin’s Dublin remain unbeaten in their last 34 games after coming away from Tralee on Saturday night last with a draw against Kerry. Jim Gavin’s side were two points down with only 3 minutes remaining but two points from Dean Rock and Paul Mannion was enough to tie up the scores at full time. Jim Gavin’s side are almost certain to be playing in the final if they overcome Roscommon next weekend, before they travel to Monaghan in their final group game away from home.  Kerry will travel to Breffni Park in this weekend, while their final game against Kerry could determine whether they will get a league final place.

The pressure is surely now building on former Sunday Game pundit Kevin McStay whose side is sitting at the bottom of the Division 1 table and are almost certain to be relegated now. It doesn’t get any easier for the Rossies either as they still have to play the All-Ireland Champions, Dublin in Croke Park next weekend, before a home game against Cavan to finish off the campaign. Roscommon will need two massive performances now to remain in the top flight for 2018, something that is looking unlikely going on their performances so far.

It is no too often in Gaelic football these days that 7 goals are scored in 70 minutes. However, this was to be the case on Sunday afternoon in Tuam when Galway met Derry in the Division 2 football league. The full time score read Galway 5-15 Derry 2-15, an incredible score line especially for this time of the year. There was a fine spread of scores as well for both teams, with Galway having no fewer than 9 different scorers, while Derry had 7 different scorers on the night, if this was top division football the two teams would be getting plaudits from the pundits, as it isn’t it probably won’t.

Andy McEntee’s Meath fought back from 8 points with 20 minutes to go to get an unlikely draw at Pairc Ui Rinn on Sunday. The Leesiders were ahead on double scores, 0-16 to 0-08 with only 20 minutes to go but the Royals fought back to get a much deserved draw in the end. Cork were dominant throughout the game but the final 20 minutes will disappoint Peadar Healy, the Cork manager, as his team basically threw the game away. Cork could still be fighting it out for relegation and the next two games against Derry (away) and Down at home will be vital for them to maintain their status in Division 2.

What a time it is to be a Wexford GAA supporter, the county senior hurlers had already secured promotion with a game to spar and it was the turn of the Wexford footballers last weekend. They had a home game against London and were impressive in the second half and came out 0-15 to -0-09 winners. Seamus McEnaney will no doubt be delighted that his side have progressed to Division 3 in his first season in charge and he will now have a league final to look forward to in April where the likely opposition will be Westmeath, In fact Wexford’s last game is this coming weekend against the Lake County in what effectively could be a dead rubber.

Throw back Friday – 2003 Hurling review of the year.