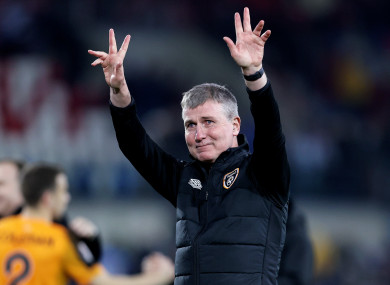 I headed up to the Republic of Ireland game against Belgium on Saturday. On one of the train stations a young boy and his father got on. It turned out it was his first time heading to an Ireland match. There was pure excitement on the train journey up.
I noticed a few first time visitors to the Aviva on Saturday. That unmissable wide eyed stare when you entertain the stadium and see the pitch for the first time.
It took me back to my first game at Lansdowne Road. It was the Republic of Ireland v Albania in 1992. I still have the ticket in a box of programmes/tickets in the attic. It’s tattered and faded but it’s a memory.
My dad had gone to Lansdowne and Dalymount Park to watch Ireland and as soon as I’d an interest we all headed off to games. It was a real family affair; my parents, my brother and myself. My brother then had no interest in watching games back then. It’s amazing how time changes people. Now he loves watching games on the box with his two young boys and heads over to Anfield regularly.
The love of sport is something I will always thank my parents for and for the many trips to Lansdowne Road too. There were some fantastic days and nights. We were there when the riots happened in 1995. I don’t think I’ve ever been as scared before at a match. It didn’t stop me from going to games.
I’m lucky now that I get to cover Ireland games. Though on Saturday it was my first time being there with Stephen Kenny as manager – covid, holidays and one thing or the other prevented me from getting to a game before Saturday.
I got work experience in my local radio station when an unknown Dubliner called Stephen Kenny was manager of my local club Longford Town. It’s been wonderful watching his journey since he was a rookie on the Strokestown Road.
From the first moment I met Stephen he was extremely helpful, thoughtful and very generous with his time. He transformed Longford Town; got them promoted for the first time ever in the club’s history in 2000. It was no surprise when Bohemians came and snapped him up – it wasn’t great at the time – but Town fan’s forgave Stephen. Anytime he returned to Longford he always got a hero’s welcome. He never forgot the fans that were there at the start of his career.
On Saturday I went to the press conference after the game and Stephen waited for a few seconds to say hello. That is the type of man he is. We spoke about his great friend Christy ‘Junior’ Campbell whose anniversary was Saturday.
I want Stephen to succeed with Ireland and I believe he will. He came in when things weren’t great and he had to change the thinking of the players and the way we played. The supporters are behind him and the players too.
We are on a new journey with Stephen and this team and I can’t wait to see where we get to. I get the same excitement now that I did when I went to an Ireland game for the first time and when I watched Longford Town under Stephen Kenny. Altogether now we’ll drink a drink to Kenny the King……..

Tiger Roll given weight ahead of Grand National