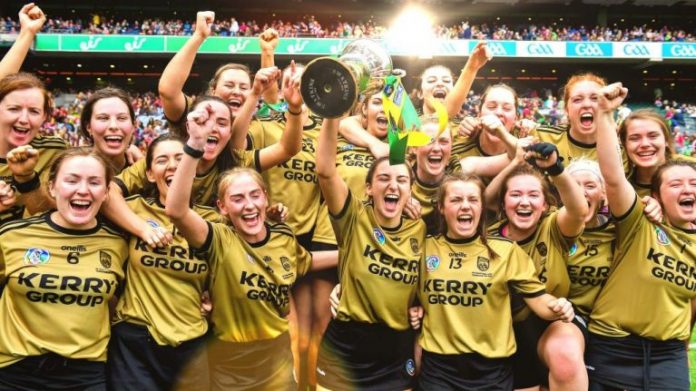 In the first of a triple-header of camogie finals in Croke Park saw Kerry edge out Limerick in the third tier final on a final score of 0-11 to 0-08. After last years disappointing defeat to Dublin in last years final the kingdom were back and looking to make amends, while this was Limericks second string outfit they just never got ahead of their near neighbors.

Limerick were looking for their very first Croke Park camogie silverware since their intermediate’s did back in 2014, in an opening thirty minutes which saw Kerry take control for long spells the last three scores of the half went in favor of the Shannon siders to leave the margin down to just a single point.

interesting and very rare that this Kerry team has an elight panel of 24 but 23 of those players are all from the same club Clanmaurice, the only player who is Brid Horgan who is from the Cillard club was actually the first to get the opening score of the game.

Overall Kerry’s work-rate and ambition saw them over the line to claim the Premier Junior All-Ireland title and can now look forward to playing Intermediate in 2020.

Speaking to sports talk after the game Kerry’s Jackie Horgan emphasized it was a big relief to come up and win after last year’s final defeat “I suppose relief is a big way but it is hard to describe am it is just unreal the work these girls have put in this has been going on over the last five or six years, the county is only their ten years its just unreal and i know its a cliche that they say oh everything is like a family but were such tight link we are all from the same club bar one that’s all they have been saying in the papers but its just unreal relief and happiness”.

Player of the game Patrice Diggin highlighted the statement that even though most of the panel is all from the same club that its not doing any injustice for Kerry camogie going forward “No that’s far from it like we played in the league this year and we actually played in division 2 against the two teams that are in the other final Galway and Westmeath and we actually held our own on both games and it was our first year up there so one hundred percent we are going to be driving on from here, this isn’t the end of Kerry camogie we will be pushing onto intermediate and division 2 next year this year was to survive relegation in division 2 and next year we will probably be going bigger”.