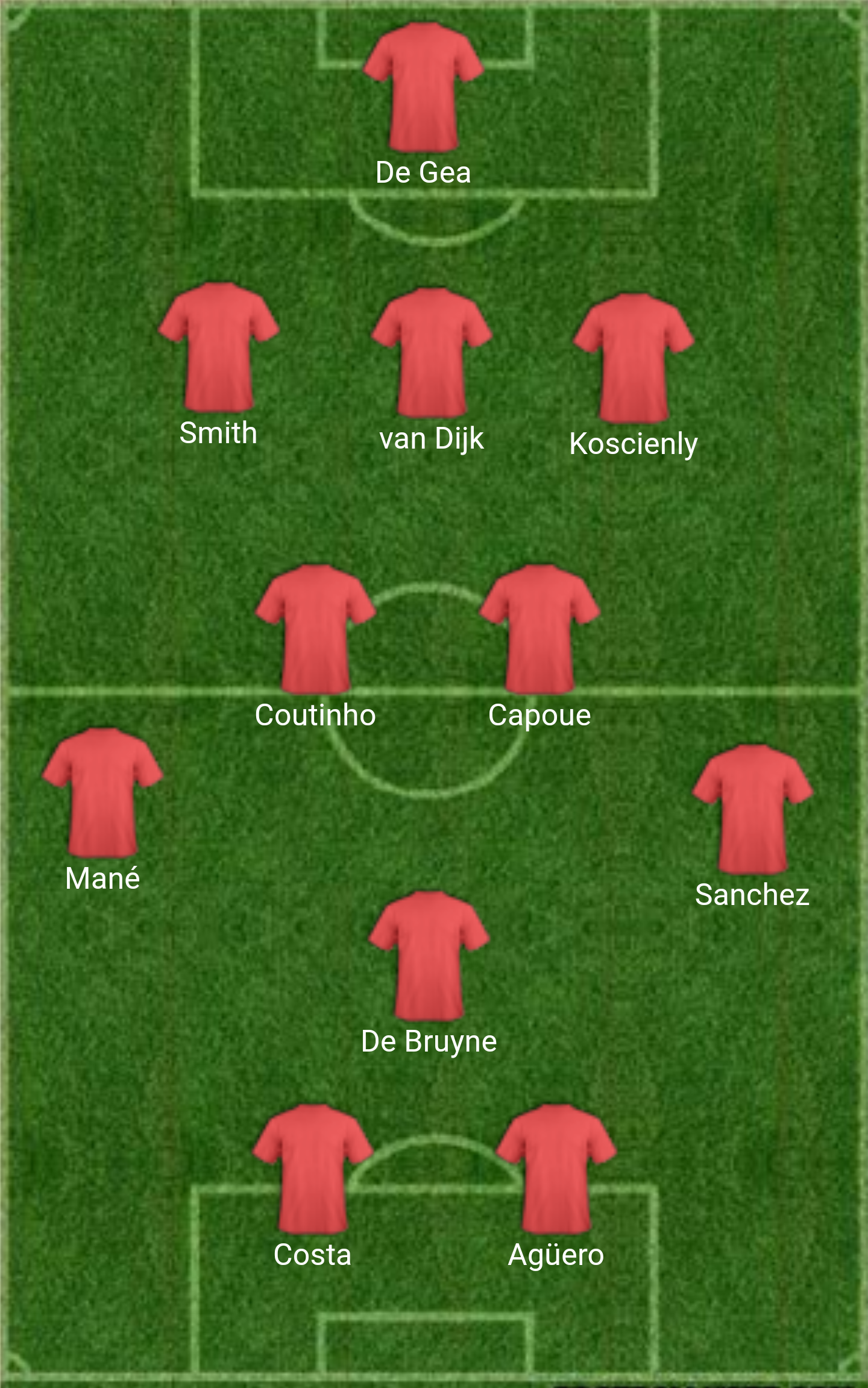 As we reach the 10 game milestone in the Barclays Premier League, we can see the table begin to take shape. Quite often at this stage of the season we have a fair idea as to where most teams will reside come the season’s conclusion. With this in mind, perhaps then it is time to look at the individuals who have stood out so far. This is the sportstalk.ie BPL team of the season so far.

GK: David De Gea. The Spanish stopper has picked up where left off last season. He has made a number of vital saves so far, with his response to a Phillipe Coutinho effort at Annfield an early contender for save of the season. He has kept 4 clean sheets so far this season. Even with his mistake leading to the opening goal at in their recent thrashing at Stamford Bridge, De Gea has looked the most assured of all the keepers in the division, and has cemented his place as one of the best at his position in world football.

CB: Adam Smith. Who you say? While everyone has been occupied with the battle at the top of the league, as well as Man United early struggles, many have overlooked Bournemouth’s impressive start to the season. Eddie Howe seems to have finally figured out how to play the expansive brand of football he desires without leaving his team exposed at the back. One of the main reasons for this improvement has been right-back Adam Smith. Smith has been a rock at the back, averaging 1.8 tackles, 2 interceptions and 2.8 clearances per contest. He has also chipped in with a goal and 2 assists going forward. At 25 years of age and in such a rich vein of form, an England call up may not be beyond the defender.

CB: Virgil van Dijk. Southampton’s impressive defensive record has continued despite a change in manager, and at the heart of this success has been central defender Virgil van Dijk. Van Dijk fits the bill as the prototypical modern centre-back. He is strong, quick, good in the air and more than capable of playing the ball out from the back. He is fast becoming one of the Premier League’s most complete defenders.

CB: Laurent Koscienly. After a shaky start to season against Liverpool, Arsenal have gone from strength to strength. Their defence has looked unflappable at times, and Koscienly has been the leading light. He is a one man wall at times, averaging an incredible 3.4 interceptions and 5.8 clearances per contest. On current form, he is the top defender on show in the league.

CM: Éttiene Capoue. Capoue seems a completely different player to the one that we saw at Tottenham. After moving to Watford in the summer of 2015, we did see an uptick in his form. However, the improvement he has shown this season has been remarkable. Not normally known for his offensive contributions, he has already provided four goals and an assist this term. He has anchored the Hornets’ midfield, averaging 2.3 tackles and 1.8 interceptions per game. Capoue also offers his team an outlet playing out from the back, where his vision and ability to carry the ball from deep have proved invaluable. Perhaps this season’s biggest surprise package.

CM: Phillippe Coutinho. Will this be the season that we finally see the consistency from Coutinho that has been lacking since he arrived on Merseyside? It certainly seems so. No longer does he drift in and out of games, being at the heart of everything this Liverpool side does. What he can do with the ball at his feet at times is simply magical. Klopp seems to be getting the best out of the young Brazilian, he has already scored four goals this term (after scoring only eight in the whole of last season), providing four assists also. Coutinho strikes fear into the heart of defenders whenever he is on the ball and will be the key factor in Liverpool’s bid to end their 26 year wait for the title.

RW: Sadio Mané. Many eyebrows were raised at the fee Liverpool forked over for Mané during the summer. However, it is quickly beginning to look like a bargain. Mané has been in scintillating form since the first day of the season, scoring four goals and picking up two assists. He has provided the pace that Jürgen Klopp lacked in his side last season, offering them a different outlet in attack. Like Coutinho, he will be vital as Liverpool seek to continue their strong start to the year.

CAM: Kevin De Bruyne. It is no coincidence that Manchester City’s recent dip in form has coincided with De Bruyne’s deterioration in health. Before suffering his latest injury, De Bruyne had been without doubt the best player in the league. His performance in the Manchester derby was one the best individual displays in recent years. Already contributing two goals and five assists in the lague thus far, he has all the characteristics to be a global superstar: pace, strength , vision, and the ability to be clinical in front of goal. He also possesses possibly the most dangerous dead ball delivery in world football. As Pep Guardiola seeks to capture the title in his first season on English soil, he will be praying that De Bruyne’s injury problems do not resurface once again.

LW: Alexis Sanchez. While Laurent Koscienly has been laid a strong foundation for Arsenal at the back, Alexis Sanchez has been their catalyst in attack. The diminutive Chilean has been in sparkling form, registering six goals and three assists in the league. In the absence of Olivier Giroud, Sanchez has been deployed in a more central role and he has certainly thrived. While there had previously been doubts about his ability to lead the line, he has dispelled those doubts with his performances thus far this season. His 2.8 dribbles per game indicate the impact that he is having on the game, and the fact that he is producing such a stat while playing in an even more advanced role than he was previously speaks to the quality of his performances.

ST: Diego Costa. Diego Costa is the most divisive player in the Premier League. Chelsea fans adore him, and just about everybody else cannot stand him. His on-field antics have enraged fans, with incidents of diving and aggressive behaviour towards both opposition players and officials. Regardless of your opinion on his character, what cannot be denied is that when he is switched on, Diego Costa is simply unplayable. After looking like he was on his way out of the English game last term, he has rediscovered his form this time around, already registering eight goals in the league, topping the scoring charts in the process. His physicality is a constant burden for defenders, and if he can continue the season in this sort of form there is every chance Chelsea can once again become a force in this league.

ST: Sergio Agüero. The first couple of months of the season have been a strange time for the Argentine. It seems that despite his excellent form in front of goal, he still has something to prove to new boss Guardiola. Pep has always been of the opinion that scoring goals is only one part of a striker’s job and that they must contribute in other areas of the game to be a part of his teams. Agüero has found himself out of the team on a couple of occasions for this reason, even starting from the bench in City’s disastrous trip to the Nou Camp. However, his performance at the weekend was a timely reminder of exactly what a contribution he can make. At times Agüero was simply breathtaking, with two sublime goals capping an outstanding afternoon. This brought his tally to seven goals in the league from only seven starts. However it was not only his clinical nature in front of goal which caught the eye, as Agüero covered noticeably more ground than he would have in a typical performance in years gone by. In fact he ran over 2.5km more in this game in comparison to his average from last season. It may be this stat more than any other that would have pleased Guardiola and is something that he will expect more of in the future.