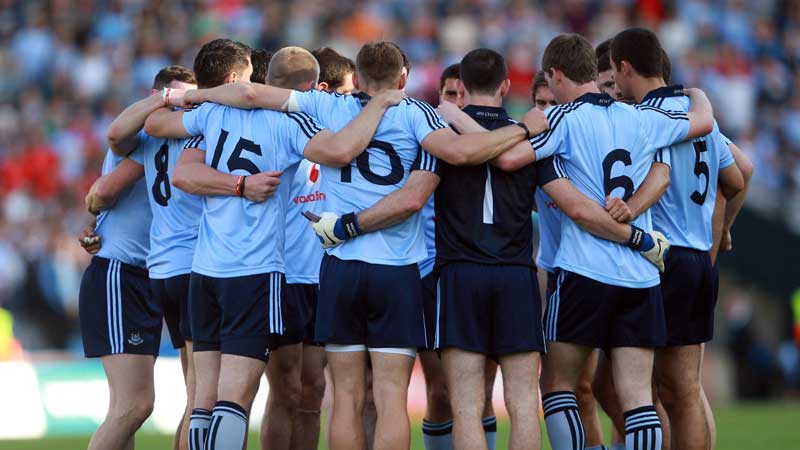 Is it time for Dublin to become 2 counties?

It was a tell tale sign. O Byrne Cup. In the middle of January. Having won the All-Ireland only a few  months previous, it would have been a bit of an ask for the Dublin senior football team to try and give their full attention to the most Mickey Mouse of inter-county competitions, in the freezing cold, three months later.

If you were a manager or player of any of the remaining 11 counties in the province, you would have to have sensed it. They may not have a chance of landing provincial or All-Ireland honours later on in the year, but for this moment at least, they would have been confident of taking a scalp. Any one of them must surely have been looking at this thinking “We can win this. The Dubs aren’t going to take it that seriously are they?”

As a matter of fact, they weren’t. While the competition was on, practically the whole Dublin senior panel, of 28 players or more, were off in Jamaica on a team holiday. The St Vincents panel members were still locked up in training for the club championship games just a few weeks away. You would have thought to yourself, well, at best it’s the Dublin third team facing up in this competition. Jim Gavin was away and the under-21 manager Paul Clarke was taking his place. As Kildare and Louth faced up to play them they must have thought the Dubs surely wouldn’t win. Except, well, they did.

What does it say about the quality of football in the province, when a county’s third team can coast to victory in a pre-season competition at the start of the year? It wasn’t always like this. Of course, given the resources, it’s only natural that Dublin would be one of the premier Gaelic Games forces in the county, but throughout the last decades, it wasn’t necessarily the case they were automatically the best. In the 90’s Meath would win the Leinster championship regularly. Offaly managed one in 1997. Kildare in 1998 and 2000. In the 00’s Laois and Westmeath beat the capital in successive years in Croke Park. It’s nigh on impossible to imagine any of those scenarios occurring now.

As Dublin face into a sixth successive year as Leinster champions you may wonder where did the disparity come from? Well, you could probably argue it was amazing it wasn’t evident for so long. Dublin has a population ten times the size of any other in the province. It has four county councils. As years go by, there seems to be an even greater conglomeration of people towards the City, as the rural decay, in the rest of the country, continues.

Over the last 20 or so years the GAA has pumped more money into the county than any other in the country through full-time coaches and development squads. So, if they have a population three times of anyone else, and their third team are able to beat the rest of Leinster, why are they still operating as one county at inter-county level? Would it not be fairer for everybody else if they had two teams?

Now obviously, it’s a bit radical for one county to be broken into two sides (Although South Down had a hurling team for the last number of years).  Then again this is not the first time that something like this has been mooted. Throughout the 00’s, when Kilkenny were seemingly winning Leinster Hurling Championships at will, it was common to hear people say that their reserves were the second best team in the country. But whereas Kilkenny’s main advantages were tradition and culture, Dublin’s are much more evident.

Last year, in a bid to break the monotonous domination of the Dublin juggernaut, the GAA agreed, for the first time in ten years, to take them outside of Croke Park for one of their Leinster Championship games by bringing them to Nowlan Park to face Laois in the quarter final. But changing the venue doesn’t automatically change the quality of the teams taking part. Also, considering Dublin fans vastly outnumbered Laois ones at the game, it was practically a home game anyway, and one which they won fairly easily.

On saying that, even though Dublin have strolled through Leinster for years they haven’t steamrolled to any All-Irelands. Of the four finals they’ve won, the greatest winning margin was 3 points. If you ask a Dublin fan now if they believe the dice is loaded in their favour, they will argue that, while obviously, they are helped by their vast numbers, the reason they are at the top of the tree, is mainly due to the quality of players.

Stephen Cluxton, Bernard Brogan, Diarmaid Connolly and the like are all fantastic exponents of the game it has to be said, who would have graced any generation. But what’s the likelihood of another breed of youngsters coming along and replacing them in future being of a similar level? Judging by underage success and numbers, well, quite high actually. Dublin have won 3 of the last 7 under-21 All-Irelands. Between 2008 and 2012 five different Dublin clubs swept the All-Ireland Feile Peil na nÓg title, the national Under-14 football competition, a feat never seen before. In a way, it’s a little bit like New Zealand in Rugby. It’s not so hard losing Richie McCaw and Dan Carter when you have Beauden Barrett and Sam Cane to step in.

The good news for the GAA though is that the Dubs ongoing success is good for business. Once they are involved, you can be guaranteed a sell-out in Croke Park from quarter final onwards whenever they play. So whereas the idea of Dublin being too strong is inconvenient, the idea of them being non-competitive seems apocalyptic. But how big is too big?

Personally, myself, I would not like to see Dublin being broken into 2 counties. Then again, I don’t want to see them completely take over either. We’ve seen in Soccer in the last few years how increased money has led to certain teams (Barcelona. Real Madrid, Bayern Munich etc) streaking away from the pack. Now you could say the GAA is an amateur organization. Looking at how the Dublin set up is run though, you’d be tempted to say otherwise.

As Michael Duignan stated in his excellent Sportstalk interview only 6 of the Dublin inter-county football team work full time. http://sportstalk.ie/only-6-of-dublin-footballers-working-full-time-michael-duignan/ They are also helped by the backing of massive sponsorship deals from AIG (which is worth 2 million euro over 5 years) and Vodafone before that.

So what’s the solution? Well, there is no easy one. Any county with that size of population as Dublin will always be strong, but rather than look to assist the county still further, the GAA could look at helping those outside the pale.

The GAA should be looking at cutting the funding for the capital sides, while increasing it for the other teams around the county. In a report in 2014 the GAA showed the county was getting more in development funds than the other 31 counties combined. Surely such funding for an already strong county has to stop.http://www.irishtimes.com/sport/gaelic-games/dublin-claiming-the-bulk-of-gaa-s-development-funds-1.2091641

Allied to that, they could maybe introduce a parent or grandparents rule, similar to what is allowed in international football, so that top level players from Dublin who aren’t on the county team (of which there are many) could play for the counties of their parents or grandparents. We say players like Seanie Johnston leaving their home counties for others. Already there are innumerable players from other counties working in Dublin and playing for their clubs. What needs to happen is for some of the traffic to flow in the other direction.

Whenever Dublin play Longford or Carlow in the Leinster championship is the equivalent of a bazooka lining up against a slingshot. Realistically, how can a county with a population of 30,000 or so match up to one of 1.5 million and growing?

Maybe if Dublin don’t win the All-Ireland this year, it will be said that there’s no problem. If Kerry or Mayo beat them come August/September the argument will be swept under the table. Judging by the demographics of the country and the money coming into Dublin GAA though, it’s obvious something has to be done. It might be slightly to the detriment of the capital, but for Gaelic football as a whole, it could be vital.