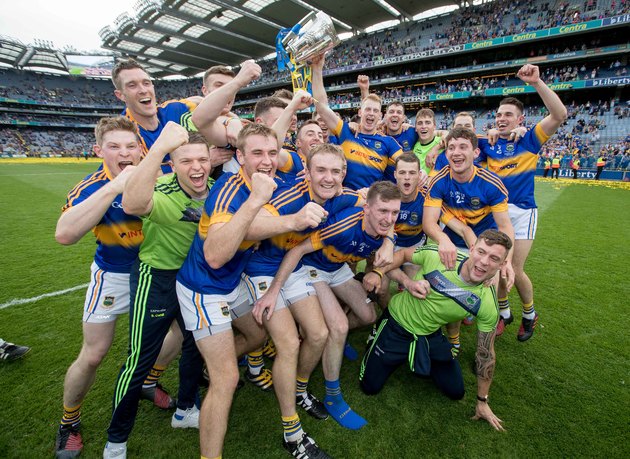 TIME FOR TIPPERARY TO FINALLY PUT ALL-IRELANDS BACK TO BACK

They are a great county, Tipperary. Certainly, in terms of hurling history, they are one of the greatest. It’s the home of hurling, or self-proclaimed home of hurling I should say. But given their lofty aspirations and history, there’s no escaping the fact that their All-Ireland record over the last half-century has been bang average.

It would have seemed ridiculous to have said so, back in 1965. At the time, they were after winning their eighth All-Ireland in 16 years. John Doyle was on every single one of those sides, Jimmy Doyle was at his peak. And it wasn’t just them, but Len Gaynor, Donie Nealon, Liam Devaney…They had a hell of an outfit. It was a team so strong, that Babs Keating declared them the greatest of all-time. And who better a man than Babs to blow his own trumpet?

But times change. When they were pondering the glorious harvest in the mid 60’s did the Tipp faithful have any idea of what kind of fallow land was about to befall them? One All-Ireland in the 70’s. A similar record in the 80’s, 90’s and 00’s before last year, they finally secured some kind of respectability by obtaining their second All-Ireland in a decade for the first time since God was a boy.

But why stop there? Why set the bar so low as a mere “one in a row”? Their victory against Clare in the league last Sunday was their third so far in competition and they are strong favourites to win it out. On Sunday Sport last weekend, Anthony Daly and Henry Shefflin were drooling over Tipp’s strength in depth, how it’s comparable to Dublin in the football championship. But whereas Dublin now have put back to back All-Irelands together for the first time in 4 decades, the search for Tipp goes on.

Of course we’ve been here before. The Tipp team that won the 1971 All-Ireland will never be accepted as one of the county’s greatest, scraping just past Kilkenny in that year’s All Ireland. The 89-91 vintage was an excellent one, but they were still ousted by Cork in both years following  All-Ireland success.

The 2001 side was defeated by Kilkenny in a classic semi-final in 2002, but perhaps the most galling defeat of all was the most recent one. The 2010 team looked primed for an extended period of dominance after gaining vengeance for the 2009 final, but the following year’s defeat was a hammer blow to the side’s morale. You could argue it’s taken them almost 5 years to recover from it.

Of course circumstances are different now. The one major advantage that Tipperary have going into this season is the stability of their set up. The elation of crushing Kilkenny’s five in a row attempt in 2010 was somewhat punctured by the decision of Liam Sheedy and Eamon O’Shea to step down afterwards. Declan Ryan was a fantastic player for the Premier, but as manager he never quite fit. Michael Ryan, on the other hand, is an experienced hand who has been around since Sheedy’s time.

Then again, the losing of the 2011 final wasn’t all of Kilkenny’s doing. There were some fundamental errors on Tipp’s behalf too. Apocryphal stories abounded of how, after defeating Dublin in a tough semi-final, some Tipperary players were in Copper’s that night declaring how they thought beating Kilkenny in the final would be less troublesome. As it happened, come the final the Cats deployed a shrewd man marking system on all the opposition’s forwards and Tipp were caught, as Eoin Kelly said “like rabbits in headlights”

This year though there can be no excuses. Back in 2011 Kilkenny still had the likes of JJ Delaney, Tommy Walsh and Henry Shefflin at their peak. There was also the argument that they had only lost the previous year’s All-Ireland because the squad was severely hampered by injuries. But now, with the side at their weakest in 20 years, there can be no argument that Tipp are the superior hurling force.

Now of course, just because Kilkenny are vulnerable, does not necessarily mean they can’t win it this year. The ability of Brian Cody to extract every last ounce of juice from the panel he has is well known. So, for sure, Kilkenny could win the All-Ireland this year. But on all known form and logic they shouldn’t.

Tipperary’s next league meeting against their old adversaries will tell a lot. Cody’s charges win against Cork was crucial in convincing themselves, and everybody else, that they haven’t gone away. Going up to Semple next Saturday, they will be keen to show that the gap between the two sides is not as great as it seemed last September. Tipp meanwhile, will want to show that the difference is at least that, if not more.

Outside of that, we have the usual suspects. Waterford: constantly on the verge of turning talent into titles. Clare, trying to demonstrate that 2013 was the proper reflection of themselves and not the distinctly underwhelming last 3 summers. Galway….well, being Galway. And Wexford, or to be more precise Davy Fitzgerald’s Wexford, trying to prove everyone (ie the Clare hurling public) wrong. Cork and Dublin may feel aggrieved that they are not deemed part of the running. But then again, they haven’t really shown us they deserve to be included.

Add up all of those factors though, and there’s still one team that looks way above the rest. And yet, maybe that’s one of the reasons they haven’t followed up an All-Ireland in years. Tipp, as a county, have never been known for their humility. Speaking on www.gaa.ie  the week before last year’s All-Ireland final Noel and John McGrath’s father was already alluding to more titles http://www.gaa.ie/hurling/news/the-gaa-gene-the-mcgraths/. It’s fine saying that. And it’s fine saying they have the best squad, the best youngsters, the best record in the league in March…. But 52 years is a long time. If Tipperary don’t back up last year with an All-Ireland this year then it will be a failure. All of their squad and management should be aware of that.