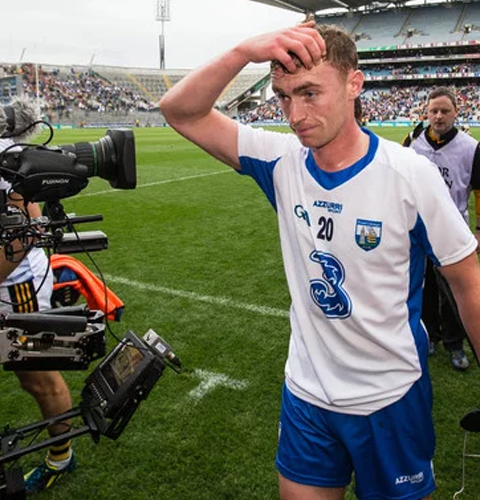 So if you’re a Waterford hurling fan, you’d be pretty happy about your lot now right? There you are, heading down to Cork for the weekend of the All-Ireland quarter final. You’ve waited 58 years for a victory over your fiercest rivals and now you’re into the last 6 of the competition with a strong chance of getting to the last four. So surely everyone in the media will be singing your praises, right? Yeah, well unfortunately, it’s not going to work like that.

While it’s a great achievement to finally get the Kilkenny monkey off your back after so many years, the fact is the victory did little to suggest that Waterford have in fact turned a corner in their season, or are still plodding along at a moderate pace. Given their performance levels this season, a win over Kilkenny is no longer the benchmark of success. The Noresiders had a middling league, before following it up with an even worse championship. They were deservedly beaten by Wexford, a game they should have lost by more, stumbled past a distinctly average Limerick side before coming to an eventual halt after a 90-minute battle two weeks ago.

It’s a great relief for Waterford to get past Kilkenny. Psychologically, after so many years and defeats, it’s huge. But they would do well to remember that the 2015 All-Ireland champions are no longer the barometer in the game. Kilkenny were beaten by 3 points by Wexford in a Leinster semi-final. A Wexford side that was then eviscerated by 9 points by Galway in a Leinster final. So, it’s clear that Brian Cody’s men have fallen a long way in a short period of time.

There’s also the fact that Waterford’s performance in that game left a lot to be desired. With 15 minutes left they were coasting by 8 points, but in the remaining time panic spread like an epidemic throughout the side. Losing a lead of that size to have to play extra-time does not smack of a side that’s ready to win an All-Ireland. Instead, it still hints at an underlying immaturity in the squad. From the seemingly infallible position they had in the game after Shane Bennett’s marvellous goal, they should have won by 10 points, if not more.

They likewise should have beaten their old rivals last year at the semi-final stage, particularly in the first game. Of course, given the length of time since their last victory, it was obvious there was going to be some mental block. But once that hurdle has been overcome, it’s time to move on to the next challenge. So, Waterford beat Kilkenny. Good. Given the respective talent levels in both squads at the moment they SHOULD be beating Kilkenny. But if that is to be their only landmark championship victory this year, they can hardly be said to have had a good season. When you’ve reached All-Ireland semi-finals in each of the last 2 years, you’ve got to be setting your sights a bit higher than that.

Looking at Sunday’s game against Wexford, Waterford are odds on favourites at a price of 1/3. But why? Look at their season in comparison to Wexford’s and tell me whose is better? Obviously, Wexford had a much better league, by winning their division and getting to the semi-final. Waterford flopped against Cork in their first-round championship game, re-energized themselves against Offaly, and then managed to beat a faltering Kilkenny side who Wexford had already beaten, and in normal time too. So perhaps, on the basis of their most recent championship game, or on the second half of their most recent championship game, Wexford deserve to be underdogs. But by most other metrics this is a 50/50 game.

That’s also not to overlook the fact that in the qualifier history of these 2 sides Wexford have a decent record. They have beaten Waterford twice in the qualifiers: once, way back in 2003, and the other as recently as 2014. Sure, they were beaten by 10 points in the corresponding fixture last year, but you’d have to say they’ve improved a lot since then. Their league form and reaching a Leinster final would suggest as much. Could you say the same about Waterford though? They’ve had a worse league than last year, and, in contrast to then, they didn’t make a provincial final. So, not only is the formbook not really on Waterford’s side, history isn’t necessarily on it either.

In the last 20 years three Waterford men (Tony Browne, Dan Shanahan, Austin Gleeson) have won hurler of the year. But during that time the county has only contested, never mind won, just one All-Ireland final. And they were hammered in that. So what does that say? Well clearly there’s plenty of talent in the county, as much if not more than any other one in the country. But during that time, they’ve never once had a great team. Potentially great, yes, but not one truly consistent, dominating side. It’s a damning indictment of them.

Austin Gleeson was fantastic against Kilkenny. But, as is typical, he mixed the superb with the inane. There was those 5 awe-inspiring points, but there was also that flicked “back hand-pass” in the second half that bordered on unnecessary arrogance. Sure, he’s good, we all know that. But maybe Gleeson is somewhat symptomatic of the essential problem with the county. He is a great individual player, but not necessarily a great team one. Flicked hand-passes are not an indicator of the killing instincts of All-Ireland champions. And that’s the level that Waterford need to aspire to.

In contrast to Gleeson, who admittedly always produces at least one awe-inspiring moment per game, is the much more unheralded, but arguably more effective Jamie Barron. During that pivotal first period of extra time against Kilkenny when Waterford really needed leadership, Barron stood up like no other, by scoring 1-2 from midfield. He is THE man on that Waterford team.

In soccer terms, Gleeson, is a Steven Gerrard like figure: majestic, spectacular, but capable of moments of stupidity. Barron, meanwhile, is more of a Xabi Alonso. He doesn’t have the athletic gifts of his colleague. What he does have is the most astute of hurling brains. He always seems to do the right thing with the ball. He’s like a more energetic version of Kilkenny’s Cha Fitzpatrick. He’s the kind of hurler that could have fit seamlessly into that Kilkenny 4 in a row team. And he’s the kind of hurler Waterford need to produce more of if they’re to win All-Irelands.

The thing about Waterford is that we know they can do the spectacular. That’s never been their problem since their re-emergence as a serious force back in 1998. But can they do solid? Can they produce big performances back to back? Because throughout their hurling history a massive success has invariably be followed by just as big a downfall. In 2007, perhaps their best chance in the modern era of an All-Ireland, they blew an eminently winnable semi-final by conceding 5 goals against an average Limerick team. In 2011 they shipped another 5 goals in a Munster final drubbing against Tipperary. In 2016 Tipperary did likewise again. It’s been ever thus with the side. There’s always a stinker in the locker somewhere. The hope is their woeful performance in the first round against Cork will be their only one in the championship this year.

If all of this sounds like a poisonous attack on the character of this side, it’s not meant to be. We, the hurling public at large, love Waterford. They have given as much, if not more entertainment, than any side over the last 20 years. Even the last game against Kilkenny was hugely enjoyable. But they’ve patented being the loveable loser. They need to move away from that. Because although you gain fans by playing with style and elegance, you only gain respect by winning.

Derek McGrath is as decent a hurling man as anyone, but he will know himself that one swallow does not make a memorable summer. Losing to Wexford on Sunday won’t be the disaster that losing to Kilkenny would have been, but if Waterford’s season is to have credibility, they need to win. They’ve already reached championship semi-finals 2 years in a row, not to contest a third would constitute a backward step. You could argue that not getting to an All-Ireland final this year would indicate a lack of progress. It’s time for Waterford to stop patting themselves on the back for beating Kilkenny and instead set out on making some more history of their own. But will they do it? Well, when it comes to Waterford, you never quite know do you?

Time to give Joe McDonagh Cup respect it deserves