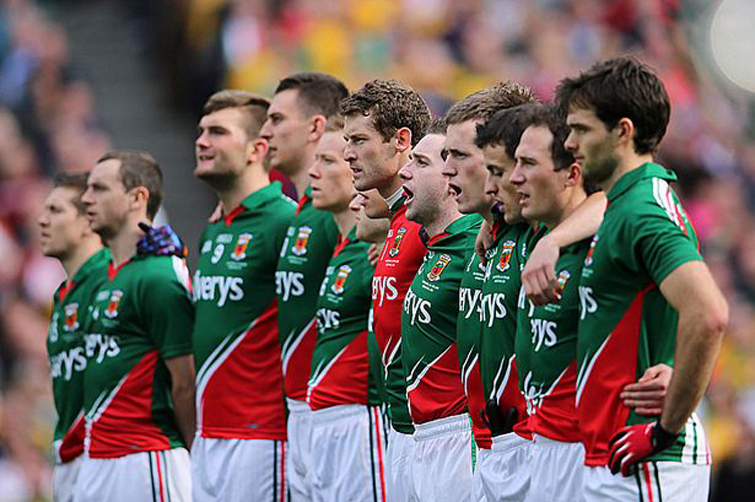 It’s strange that, given their status as staunch Galway supporters, the compositions of Tuam’s finest “The Saw Doctors” have had such an impact on Mayo football fans psyche. Many a tear has been shed listening to the “Green and Red of Mayo” with drunken fans boldly proclaiming “This is our year”. But, even given that songs status as an ode to their beloved county, it’s arguable that another one would resonate more. In fact, considering Mayo’s appalling sequence of final defeats, you could say “To win Just once” is the tune that must really strike a chord.

No one does failure quite like Mayo. Since 1989 they have appeared in 7 All-Ireland finals and lost every single time. Even England’s most loveable loser Jimmy White, with six consecutive World Championship final defeats, can not match such a record. Since 1951 all but two of the surviving members of Mayo’s last All-Ireland winning team have died. Whether they were cursed or not by a priest in Foxford is open to debate, but the fact of the matter is they have 70 minutes next Sunday to make sure they don’t repeat the same mistakes of the last 65 years.

If anyone can empathise with such a sentiment, it’s surely Mayo’s Anthony Finnerty, the star of the 1989 final. Few remember the fact that the Moygownagh substitute scored the goal that put Mayo in front early in the second half. But they sure as hell remember the chance he missed to put them further ahead a few minutes later. It’s unfair to place all the blame on Finnerty’s footsteps however, as the side didn’t manage one score in the last 16 minutes as the Rebels rallied to win by 3 points. It was a disappointing end, but after such a promising performance in their first final for 38 years, surely better times were to come no? That’s not a thought that lasted for long.

If Anthony Finnerty was the chief protagonist of the 1989 final, then Meath’s Colm Coyle was undoubtedly the main man 7 years later. The Seneschalstown right half back was never universally loved outside his own county. I once heard him euphemistically described as “A bit of a scamp”. But still and all, he had one of his greatest interventions as a player in the drawn final of 1996, where his late point salvaged a draw after Mayo, as is their wont, blew a 5 point lead.

If this was the positive side of his game, the scampish nature of Coyle’s character was somewhat more to the fore in the replay. After an infamous mass brawl that involved practically every player on the pitch, Referee Pat McEnaney knew he had to take action. In his own mind, the Monaghan man had decided to send off both of the sides midfield lynchpins, Liam McHale and John McDermott. But this was before one of his umpires rushed over to him and uttered the immortal words “Colm Coyle’s after dropping about 6 fellows Pat, he has to go”. So instead of sending off possibly Meath’s most influential player, he sent off….well he sent off Colm Coyle.

Even given such a disadvantage, it’s undeniable Mayo shouldn’t have lost the game. They led by 6 points at one stage before Tommy Dowd’s late goal pegged them back. Brendan Reilly’s beautiful late point sealed their fate. It takes a certain lack of nerve to continuously lose All-Ireland finals, but even in the history of epic Mayo bottle jobs, this one must rank as one of the finest.

“What’s the difference between Maurice Fitzgerald and a taxi? A taxi can only carry 4 passengers!” Such was the, admittedly low, standard of joke doing the rounds after Mayo had blown yet another final in 1997. No man is an island, and no man can win an All-Ireland by himself. But Maurice Fitzgerald came pretty damn close.

The Cahersiveen man was an anomaly within the GAA. He played with a talent matched by few, and a tan only surpassed by David Herity. But his individual performance in scoring 9 points in securing his first All-Ireland medal in 1997 was surely his finest moment. You could ask why Mayo didn’t hit him/double mark him/put someone rather than the ageing Pat Holmes on him, and they would all be valid questions. You may also ask why a team that Mayo beat by 6 points in an All-Ireland semi-final 13 months previously, could so easily overcome them the following year.

It wasn’t a vintage Kerry team, but aside from Ciaran McDonald’s glorious second half penalty, it was a massively underwhelming Mayo performance, undeserving of victory. It’s one thing to fail while playing well. To fail, after playing so abysmally as Mayo did in 1997 was quite another. Not quite the bottle job of 1996, but not far off it either.

Sometimes you eat the bar, sometimes the bar eats you. Sometimes you blow a match, sometimes you’re beaten by a better team. If there is solace to be taken for Mayo from the 2004 final, it’s that they didn’t blow it, so much as they were never going to win it.

That’s not to say that there wasn’t an element of false hope however. An early Alan Dillon goal seemed to be just the shot in the arm  they needed, but rather than panic, Kerry merely slipped through the gears and beat them at their ease.

Maurice Fitzgerald was the hero in 1997, but here it was his successor as Kerry saviour, Colm “The Gooch” Cooper, who really stepped up to the plate. Identifying the inexperience of Mayo’s left half back Pat Kelly, Kerry targeted him by putting their best forward against him. It wasn’t just Kelly who was exploited, the whole Mayo team failed miserably on the day. The 8 point gap at the finish flattered them.

Groundhog day again for Mayo as for the third final in succession Kerry defeated them. Closer in spirit to 2004 than 1997, bar a 5 minute spell approaching half time where they netted 2 goals, they were never really in this one. In fact, if anything the hope was crushed even earlier than usual as Declan O’Sullivan and Kieran Donaghy gave Kerry an unassailable lead with 2 goals in the first 10 minutes.

This was Mayo’s biggest defeat in an All-Ireland and it was no less painful than any of the others. Things may have been different if the same side who had so impressed in turning Dublin over in a classic semi-final had showed up for the final. But, as is so often the case in their history, August promise continuously led to September despair.

“We win or we learn” is the motto of Dublin’s Conor McGregor. Such a sentiment, however, never seemed to extend as far as the West of Ireland. They’ve certainly learned a lot over the years, have Mayo, but they didn’t absorb a fundamental lesson from 2006. Namely, don’t let your opposition blow you out of the water with goals in the first ten minutes, particularly when that team is as impenetrable as the Catenaccio-esque defensive system of Jim McGuinness’ Donegal.

Maybe Mayo were taken by surprise by the unusual choice of Donegal to place the gigantic Michael Murphy on the edge of the square. Within two minutes the Glenswilly man had vindicated that decision by scoring one of the all time great All-Ireland final goals. If the first goal was naïve, the second was unforgivable as the unfortunate Kevin Keane dropped the ball straight into the hands of Colm McFadden to bury to the net, and in doing so, all but end Mayo’s chances.

7 points down after ten minutes, Mayo rallied to an extent to reduce it to 3 at half time, but never managed to really bite at Donegal’s heels enough and lost in the end by 4. It seems churlish to say Mayo avenged the demons of this defeat in the respective quarter-finals of 2013 and 2015. The one that really mattered of course, remained elusive.

Not a great final to look at, and neither a great story to write about. There’s no romance here, just Dublin remorselessly crushing Mayo’s dream once again.

Bernard Brogan was the hero, netting two goals but it was the same old failings that cost Mayo yet again. Like the 1997 final, they had beaten the same side in the All-Ireland only 13 months previously. They worked their way back into contention in the second half, but a second Brogan goal killed them. The closer they got to the line, the more desperate Dublin became, as they cynically dragged each Mayo player in sight of goal down. With the last kick of the game Cillian O’Connor lobbed over a free to put just a point between the teams. He did so in the knowledge there would be one more play in the game. Seconds later the referee Joe McQuillan blew the final whistle.  If it wasn’t for bad luck….

I don’t know about you, but there have been times in the last few weeks that I’ve almost forgotten who were playing in this year’s All-Ireland football final. I haven’t heard any “Sam McGuire’s coming home to Mayo” songs. The “Mayo for Sam” banners and road paintings have been conspicuous by their absence. Maybe the pullout in this week’s Mayo News gave a lie to that but the question remains: Do they really believe they can win this All-Ireland?

Never have such a seemingly out of form team succeeded in reaching an All-Ireland final. Mayo’s record in finals is horrendous. But what can’t be denied is the side always seems to produce one great Championship performance per season. There hasn’t been one so far this season though. Could it be that they’re saving their best for the final?

For the last few years the green and red have sauntered through Connacht on their way to Croke Park in August and September. This year, they’ve somehow stumbled there. Perhaps it’s all just a cunning plan? “They’re cute ‘aul hoors in Mayo”…. said no-one ever. Will next Sunday finally end a 65 year hoodoo? For the love of all that’s good and proper, let’s hope so.

WHY CODY WAS RIGHT TO STAY ON