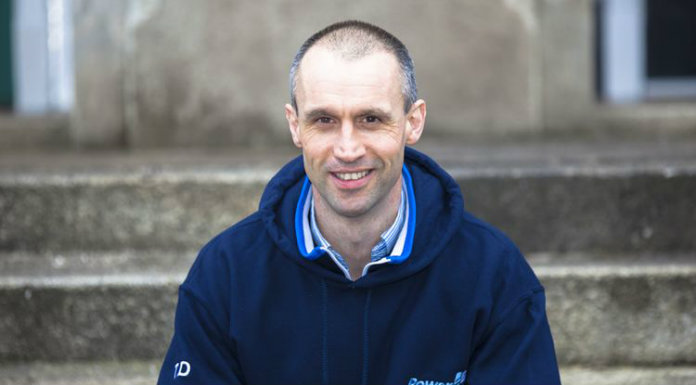 Tommy Dunne is well renowned within hurling circles. The Toomevara native and proud Tipperary man has had many successes throughout his long hurling career. His big day arrived in the 2001 All-Ireland Final against Galway when he captained the winning side, which included the likes of Brendan Cummins and Lar Corbett; they were only beginning their inter-county careers at the time. Tommy looks back on his upbringing with fond memories: “I am the oldest; I have four brothers and one sister. We used to live in the village of Toomevara and then we moved to a place called Gurtagarry. That is where I attended primary school. I then went on to secondary school in Templemore. My mum was a Borrisoleigh woman and my dad was a Toomevara man through and through. My dad and my uncle Jimmy hurled for Toomevara and they would have been hugely influential on me starting out. I remember just hurling anywhere. In the yard, around the house, in the neighbour’s field anywhere really. It was everywhere and I loved it. I loved all sports. Growing up in the 70s and early 80s it was a huge part of my life.”

Tommy felt sport was everything and was always something he looked forward to. He said: “I remember watching the famous All-Ireland between Kerry and Offaly. I just recently watched it again in the last 12 months and it brought me back to watching it as a youngster, with my family in the sitting room. In terms of hurling, I remember playing with sods of turf on my neighbour Mikey Ryan’s farm. I used to help him on the farm and he would have given me some pocket money. He was very good to me. Sadly he passed away last year. We didn’t have the sliotars to play with at that age, but we played with what we could and it was still a very enjoyable time.” In terms of experiencing an inter-county game for the first time, Dunne remembers this moment fondly: “My dad took me to a Munster semi-final in ‘82, between Cork and Waterford. Tipperary at the time didn’t feature. Cork had a fierce strong side. They were a powerful team. I just remember sitting in Thurles with my Dad and wanting to be guys like Jimmy Barry Murphy, Tom Cashman and Dermot MacCurtain. These names flew off the tongue. I remember watching that All-Ireland between Cork and Kilkenny. I watched it at home; there were some serious hurlers on show. That was the catalyst for me to become an inter-county hurler.”

Dunne is from a very successful area in the north of Tipperary called Toomevara. The ‘Greyhounds’ as they are known became very successful at senior level in the 90s and into the 2000s. However, this wasn’t always the case. He said: “I remember going to an Intermediate North Final against Portroe in 1983 and losing to a last-minute goal and the devastation I felt as a result. My father was playing. That would have been one of the first games I would have been at and I suppose that gave me a feel for the game. In terms of playing for the club, I remember playing in an U12 county final against Knockavilla Kickhams in Templemore. I came on as a sub. I was only nine. I remember missing a sitter. Kevin Kennedy came through and gave me the ball. I was too nervous to catch it and doubled on it. I will never forget it. Luckily we were blessed with great coaches who would have helped with my confidence as a player. I would have to thank a great coach of mine Neil Williams. He was a teacher in Toomevara at the time and coached the Juvenile section of the club for many years. He developed many players and was the driving force for sure. There were other people like the likes of Tom Hassett and Jerry Kelly, but Neil would pick the team and do the drills at training. Neil helped us win U12 and U14 county finals and helped me on my way I suppose.”

In terms of Tipperary and eventually making it onto the county set up, in the weeks before he entered the Tipperary senior squad, Tommy recalls what happened: “God I do remember it. I had played minor and U21 for Tipp. The senior manager Babs Keating rang my Dad. I didn’t even talk to him myself. My dad had reservations. He thought I might have been too young or too light. In those days the national league took place from October onwards. So it would have been late ‘92 into ‘93. I came on in a National League game against Offaly. I was marking the Offaly legend, Brian Whelahan. It was a surreal feeling and to share a dressing room with the likes of Declan Ryan at such a young age was an amazing feeling. These guys were men you looked up to. I was still only a kid.”

Tommy’s finest hour would come in the 2001 season when he was given the captaincy and would lead the Premier County to victory over a strong Galway side in that year’s final. He said: “That year was quite an exciting time. There was also a sense of fear, a sense of not wanting it to slip past. We had been on quite a barren run. Tipperary hadn’t won the All-Ireland since 1991. We were beaten in 1997 by Clare by a point. Nicky English came in 1999 and we had quite a mature team. We had been building for two years. We also had the up and coming lads; the likes of Lar Corbett, Eoin Kelly and Mark O’ Leary. Those lads mixed in with the likes of Brendan Cummins, Eamonn Corcoran, Declan Ryan and John Carroll; made the team click. I had been captain for three years. I remember the build-up around the home was something special. You had people from everywhere calling to the house to wish us well. I was still living with my parents at that time. It was those things that made you realise that this wasn’t just another game. I remember my brother Terry was dropped from the matchday squad and being very disappointed for him. I remember the day before the game my parents leaving for the match and being quite emotional. There was such a sense of pride and occasion about it all. I headed off on a Saturday evening with the team up to Dublin and we stayed in the Burlington. That was what it was like in those days. The motorway wasn’t there. I remember loads of people meeting us at the train station in Thurles to wish us well. Stuff like that meant a lot.”

The final itself was a very close encounter. Dunne said: “God I do remember it. We had built a lead up in both halves and Galway came back at us each time. It was just about getting over the line in the end. I think the bond we had as a team was huge to that win in particular. The likes of Philip Maher were always cracking jokes and the team were always very close. I think it is important to have that aspect. Paul Shelly was around before that and anywhere he went you would be sure that the craic was had. I used to love going away with the lads. Niall Quinn had great connections with Tipperary. I remember going over to Sunderland and using their training facilities. It was all part of it too. It was great to see the connections Tipperary had elsewhere.” In terms of senior club hurling, Tommy’s beloved Toomevara had quite a strong team from the late 90s into the 2000s. The North Tipp side produced many fine sides throughout that period. Dunne said: “To be honest, our club had been building for some time. We got to a North Final against Kilruane in 1986 and there were almost 10,000 at the game. I think the reason why Toome were so successful was that our underage structures were right. We had the likes of Mikey Bevans and Willie Ryan for example over the years. Having a tough championship, with former club All-Ireland winners Kilruane and Borrisoleigh I think motivated us. Unfortunately, we were beaten in a Club All- Ireland ourselves in 1994 by Sarsfields of Galway. We still managed to win plenty of North, County and Munster titles in the following years.”

With hurling evolving, it is fair to say rules are being brought in constantly and the style of play has also developed. Hurling is in a different place, but the fundamentals are still the same. Tommy is now a coach and involved with the game differently: “I didn’t always want to be a coach necessarily. John Costigan, a good friend of mine, was chairman of the Tipperary County Board in 2006. That was my last year playing for Toomevara. He asked Declan Ryan to go as manager of the county minor team. I went in with Declan as a coach. I was blessed to have had that experience. Tipperary won the minor final in 2007 and we had the likes of Paudie Maher, Brendan Maher and Noel McGrath, who are household names today. My passion as a coach was being on the pitch, working with players and doing the drill and fitness stuff. I got the love for coaching from that experience and having Declan there made the transition easier for me.”

Tommy Dunne will go down as one of the finest players of his generation. There were many fine players during his hurling career. He said: “I would love to have played with DJ Carey. He had everything.”

Ollie Moran looks back at Sunday’s All Ireland Hurling final

IT’S TIME TO TALK ABOUT DUBLIN