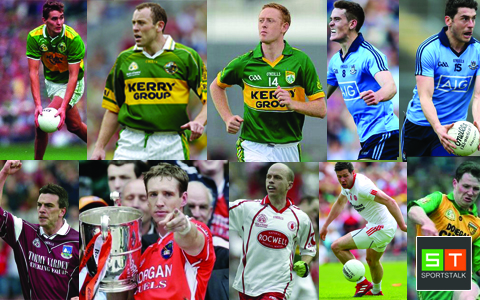 “What’s the difference between a taxi and Maurice Fitzgerald? A taxi can only carry four passengers!” This, and other terrible jokes, were doing the rounds in 1997 after the perma-tanned, perma-classy Cahirciveen man carried an otherwise average Kerry team to their first All-Ireland in 11 years. He scored nine points in total, including 3 from play, one from a side-line, and one from a left footed free from such an outrageous angle it’s hard to imagine anyone even having the gall to try it nowadays. It may not necessarily have been 14 men on his back, but it’s damn hard to imagine they would have won the cup without him.

When Colm Cooper retired from inter-county football this year there were those (ok, Joe Brolly) who attempted to taint his legacy by saying he was never as effective in Croke Park for Kerry against Northern sides. There may have been a grain in truth of that (although he was very good in the 2005 final against Tyrone) but he more than made up for it against everybody else. We could have chosen the 2007 final, but we have picked the 2004 final against Mayo where the Killarney man was at his peak. He scored 1-4 from play and his goal was a thing of sheer beauty. A purist loving catch over the head of the hapless Pat Kelly, a beautiful shimmy inside the cover and then the most composed of finishes past the stricken goalkeeper Peter Burke. If there was a more classic Gooch score, I haven’t seen it. And as regards influential All-Ireland final performances, it’s hard to beat it.

When people talk about Sean Cavanagh as being one of the greatest footballers to have played the game in the last quarter of a century, it’s games like this that they are referring to. In contrast to 2003 and 2005, this wasn’t a star studded Tyrone forward line that won the All-Ireland. Peter Canavan had retired, Stephen O’Neill and Eoin Mulligan were only being used as subs. Someone needed to take over the mantle, to take the game to the Kerry defence, and that man proved to be Cavanagh. He accumulated a, scarcely believable, five points from play as the Red Hands eked out a surprise victory.

Whatever about a defender being named footballer of the year, it’s exceptionally rare for a Gaelic footballer to be named the Sunday Independent sport star of the year, particularly in an Olympic year as it was back in 2000. But such was Moynihan’s influence for Kerry that year, that such an award didn’t seem anyway out of the ordinary. Pauraic Joyce was the best footballer in both the 1998 and 2001 All-Ireland’s, but the reason that he wasn’t in 2000 was because of a slightly built Glenflesk man up against him who could leap like a salmon and who went from being one of the greatest half backs in the game, to being an even better one at the edge of the square.

As overused clichés go the “A game of two halves” is right up there in the sporting lexicon. But in this particular instance, a single player underwent a damascene conversion in the space of 35 championship minutes. In the first half of the 2001 All-Ireland final Pauraic Joyce was being well shackled by that veritable Meath man mountain Darren Fay. In the second half though, to quote Darragh Moloney or Jamie Redknapp, he was on fire. He managed to emerge from Fay’s clutches to kick five points from play as Galway, underdogs going in, sauntered their way to an awesome nine point victory.

He didn’t win a Celtic Cross on the day, he didn’t even get a Man of the Match award but, just like Maurice Fitzgerald in 1997, there was one man leading his side that day, and 14 trailing in his wake. Canavan notched 11 of his side’s points (Jody Gormley was the other player to score for them) and though it’s impossible to win an All-Ireland on your own, Peter the Great went pretty damn close. The shame is, in the last minute of the game as he tried to assist Sean McLaughlin in levelling the match he (allegedly) touched the ball on the ground, which resulted in the score being ruled out. It may have taken him 8 long years to get back to the peak, but thankfully this was a story that had a happy ending.

Manus Boyle spent the majority of his inter-county career in the shadow of his namesake Tony in the Donegal full forward line. But on the biggest day of all, the 1992 All-Ireland final, the lesser heralded Boyle was the one who proved vital. He scored a mammoth nine points in the game, four from play as the Northerners provided one of the biggest upsets of modern times by overcoming odds on favourites Dublin in the final.

There may be some Dubs fans reading this who feel there’s not enough of their men on the list. Well, they can take solace from the fact that their final victories are mostly hard earned and usually a collective effort than overly reliant on one particular individual. On saying that, in the 2013 All-Ireland they were particularly indebted to the younger Brogan brother who palmed two goals, got another 2 points from play, and generally made the difference against a customarily forlorn Mayo side.

Not just a great performance but one that’s even greater in the context of the way he did it. All the other men on this list were seasoned championship campaigners when they starred in All-Ireland finals. Fenton, on the other hand, was completing only his first full season for the Dubs when he secured that coveted medal. What a season it was though, and what a barnstorming performance he gave in the final where he was just denied a goal by the post in the second half. And he still hasn’t been beaten in a championship game. What chance that changes on Sunday?

Conor McGregor’s coach John Kavanagh once said that if he had started training Kieran McGeeney a few years earlier he could have been a UFC world champion. Certainly, while the Mullaghbawn colossus was never the most spectacular of footballers, his sheer determination and physicality made him one of the most respected ever. His 2002 All-Ireland final performance typified that. Committed, courageous, resilient, he and his Armagh side simply refused to be beaten, and they managed to secure that cherished, and still solitary, All-Ireland title.