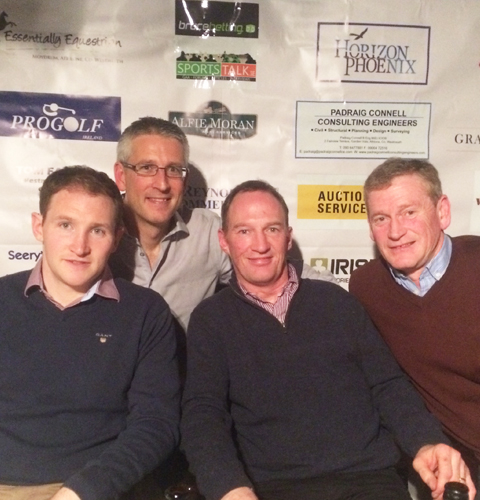 Sportstalk travelled down to the “The Gap House” Moate for a Cheltenham Preview night held by Maryland GAA. A stellar line-up of Paul Carberry, Dan Skelton, Kevin Blake and Tony Mullin’s didn’t disappoint a packed “Gap” house crowd as MC Gary O Brien the voice of Irish racing reffed superbly many debates amongst the panel.  Here’s some of the top talking points to come from this fantastic night.

Stay tuned to Sportstalk.ie as we reveal our panels top tips Race by Race this weekend.

According to good friend Paul Carberry panelist on the night, he spoke to Barry,  who was first told he broke 6 ribs but upon return to Ireland got checked out again to have it revealed in fact there was only 1 rib broke. Good to get a second opinion right! Bad news for jockeys hoping to jump aboard his potential mounts especially Mark Walsh. Jockeys are normally made of steal and we are confident 1 rib break won’t keep one of Ireland’s greatest jockeys out of the March meet.

The bet of the meet for Tony Mullens is Yorkhill in the JLT Novices Chase 1:30 on the Thursday. While he points out Douvan, Altoir are sure bets they are unbackable at their current prices. Yorkhill at 6-4 is a backable price and a wise gamble according to the Kilkenny man.

Betting on the Champion Jockey is too risky as they can be stood down after any race, while your bet goes up in smoke. However Champion Trainer you will get your full value for money and with approx 70 runners in the Willie Mullen battalion heading to Prestbury Park.  4/7 price is a sure bet and will keep your interest up throughout week.

Neon Wolf in the Neptune Investment Novice Hurdle on the Wednesday is a race that the panel agreed was a favourite to take on. The main reason been the horse is rather small and a little cowardly, coming at the top of the hill in Cheltenham with space getting tight and bravery required just might catch this little lady out. Bacardys is your bet at 5/1

A number of horse are yet undecided which race they will be running in come Mid March, Yorkhill, Neon Wolf & Finans Oscar are all horses entered into multiple races, difficult to suggest winners when this is the case.

Paddy Brennan taking it up 12 months ago three out was madness and the opinion of the panel that if another spastic attack doesn’t occur this wee Horse will get its redemption. 3/1 is a good price in an open Gold Cup but don’t be surprised if outsiders like Smad Place 40/1 or More of That 20/1 doesn’t pull off a big win.

Kevin Blake’s opinion on Douvan’s record is that “he hasn’t beaten anything yet” other than Seizing John he hasn’t beaten a horse over a rating of 155. Douvan is a horse Kevin Blakes is not totally convinced about and this man knows his stuff, however Tony Mullen’s near choking on his “Fanta” tells you his opinion.

Bruce Betting Launched their new app at the event and have some tempting price specials for the Festival.

Candidly revealed midway through proceedings that the Tipp man had a 5-0 record in the boxing ring didn’t deter Tony Mullins from fighting his corner with Kevin on a number of races and horses.

This race is a “balls of a race” in the opinion of Tony Mullins, with the main gripe being with the handicapper. Tony has no interest in this one and will be catching a glimpse of a Patrick’s Day Parade as a substitute. Mega Fortune was the only pick from Kevin Blake.

Stay tuned to Sportstalk.ie as we reveal our panels top tips Race by Race this weekend.