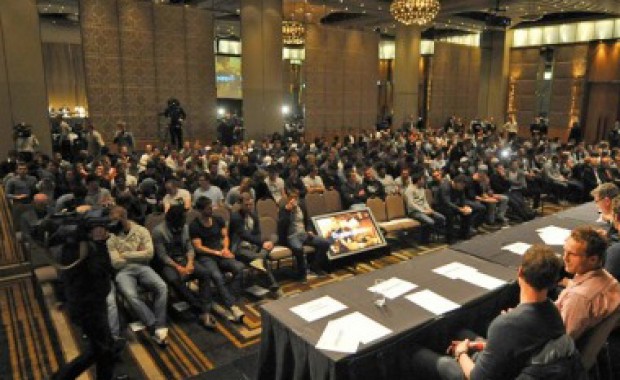 A typical GAA Club in Ireland…….

A new manager has been appointed for the coming year. He is going to be a breath of fresh air. He has trained 8 other clubs in the county in the last 10 years – this man knows his stuff. Everything is going to be different this year. The team players are sent a text in January to be at the club house for a meeting at 9 0’clock. All players must attend.

The manager introduces himself and says “we are going to win the county final this year” (the team only barely stayed up the previous year). Two club selectors are also assigned – they have been with every team in the club – they know every player inside out in the club or so they think. Players are told they are not to go to America during the summer. Everyone is to put in a big effort this year.

The players are told that it doesn’t matter what happened last year or the years before – everyone is starting from scratch. Training will be different and professional and no stone will be left un turned in the winning of the county championship.  Mikey is the first man there. He was supposed to be retired but he is giving it one more year at the age of 39. He has 3 young kids at home – he needs to get out of the house!

Players are giving gym programmes and core exercises that they must follow or they won’t be on the team come championship. Some players haven’t done weights before so they haven’t a clue what to do – but they haven’t been shown or won’t be! They are told to look up YouTube for clips on the different exercises. There will be recovery sessions after every game. Ice Baths after every match.

The county player walks in to the meeting with his protein shake after county training with all the flashy gear on. The manager nearly falls over him when he walks in. This guy is going to bring them to the promise land.  He says Club comes first (he won’t be seen until the first league/championship match) and will likely be “injured” when the club game comes around.

Diet sheets have been handed out. No more fries, chips, alcohol, white bread etc. The players are to drink 2 litres of water every day. Most players go home with a shopping list for their Mammies or partner. It costs a fortune but it has to be done. Only the best will do this year.

Training commences on the 2nd week of February. All players are there. They haven’t drank since New Year’s Eve. There was a wedding last weekend and players didn’t even drink. The gym programmes are going well. On the first night there is a fitness test for all players. It is the YO YO test. Each player is also individually assessed. All players will be given results of the tests and given advice how they can improve.

Training is tough going, the young lads are struggling with the core work and the auld lads are struggling with the running. The weather is cat and a hurl/football hasn’t been seen yet. By the last week of February the numbers are slightly down, some players have found training to hard so there are the usual excuses for missing training. One or two players who come back at the start of every year have already fell away. They can now be seen in the local pub at the weekend drinking pints. The same lads will be at every game abusing the players on the pitch for been useless. Some lads prefer the pints in the local pub than slogging around a GAA pitch.

A lot of good work has been done and there will be a challenge match in the first week of March. The players are excited, they feel this will be their year.  The manager says no team in the county is training harder than us! The fun is just about to start. Still no results from the fitness test (they were promised results 3 weeks ago). The management team are looking into organising a bonding session in the next few weeks. Will they ever get the results of the fitness test?

Next article will see how the team is getting on in March and April….

Dublin and Galway Advance to Leinster U21 Hurling Semi-Finals