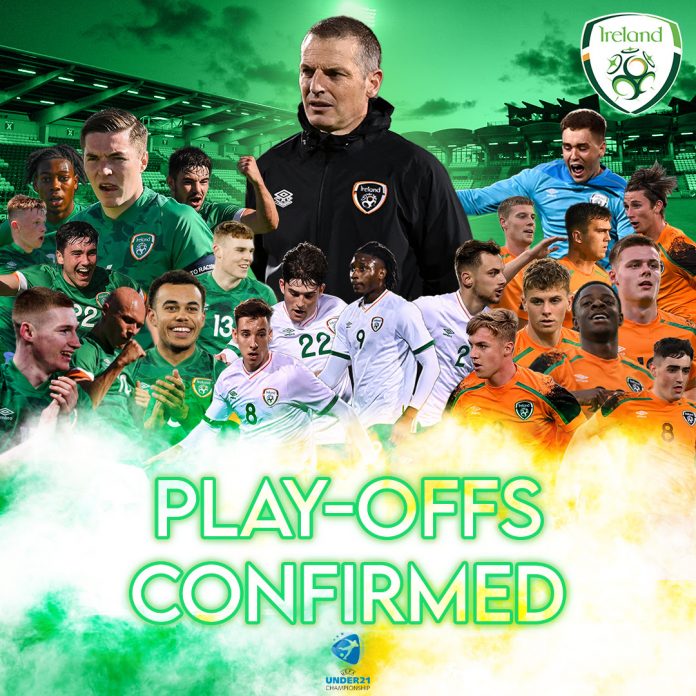 The Republic of Ireland Under-21s have secured, at least, a first ever play-off place in a UEFA European Under-21 Championship qualification campaign.
Jim Crawford’s side can still win the group and earn a place at next summer’s European Championships should they beat Italy in Ascoli on Tuesday. It would be the first time Ireland has qualified for the tournament.
Ireland are guaranteed, at the very least, a second-place finish in Group F after Sweden and Italy drew their game 1-1 in Helsingborg this evening.
Ireland have won four games in a row, while scoring nine goals and conceding just once.
Their 3-1 defeat of Montenegro in Tallaght on Monday saw them equal the record amount of points (19) for an Irish U21s side in a qualification campaign.
Monday’s win was also the first time an U21 side had won four competitive games in a row and the young Boys in Green travel to Italy looking to claim top spot and automatically qualify for the EUROS.
Speaking after securing at least a play-off spot, Ireland Under-21s Manager Jim Crawford said: “First and foremost I would like to thank the hard work and effort of my players and staff. The objective at the start of the campaign was to create history and that is now very much in our hands.
“While I’m pleased to have a play-off spot secured, the job is far from over. We head to Italy with a chance to automatically qualify and that’s our focus. Italy are an excellent team and have shown that all campaign. They have our respect but I have great belief in our lads to go to Ascoli and get a result.”
Ireland take on Italy at the Stadio Cino e Lillo Del Duca, Ascoli on Tuesday 14th at 4.30pm.