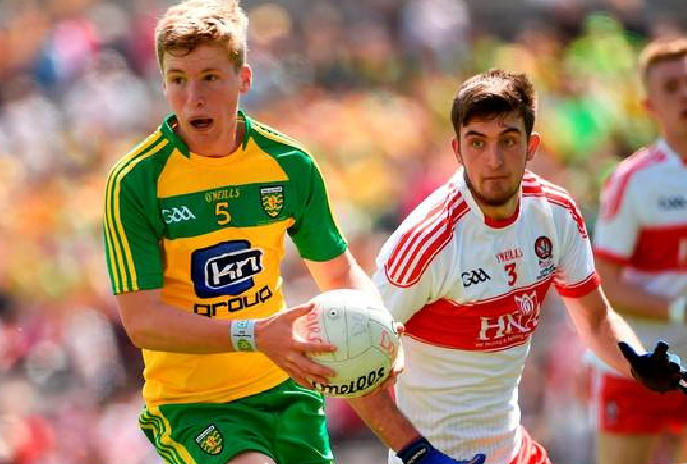 Donegal fought back from a four-point deficit to win their 2nd Ulster minor football final title in 3 years, defeating champions Derry at Clones.

JD Boyle and Nathan Boyle scored the goals for the young Donegal men on a fine day in St Tiernach’s Park in Clones, despite Caolan Devlin’s inspired performance for the Derry men.

Two early points from the Derry center forward had propelled them into a 0-4 to nothing lead after the 20 minutes, before their opponents drew level in rapid fashion with their opening score from ‘Man of the Match’ Niall O’Donnell and a clinically finished goal by JD Boyle.

Peadar Morgan rattled the net toward the end of the 1st half to give young Donegal team  their first lead and they wouldn’t be caught again, as Devlin and Eoghan McGettigan traded points to leave it at 1-3 to 0-5 at half time. Derry got off to a great start with a Fergal Higgins point but it wasn’t a sign of things to come with Shaun Paul Barrett’s riled

side responding in superb fashion, backing up a brace of points with a Nathan Boyle goal on 42 minutes to leave their neighbours four adrift.

Devlin contributed 1-3 in the closing quarter, which included a goal deep in injury time, but it wasn’t enough as Donegal were able to hold out with a crucial point from O’Donnell giving them a cushion as they were deservedly crowned champions of Ulster.

The Competivatate rivalry in Ulster