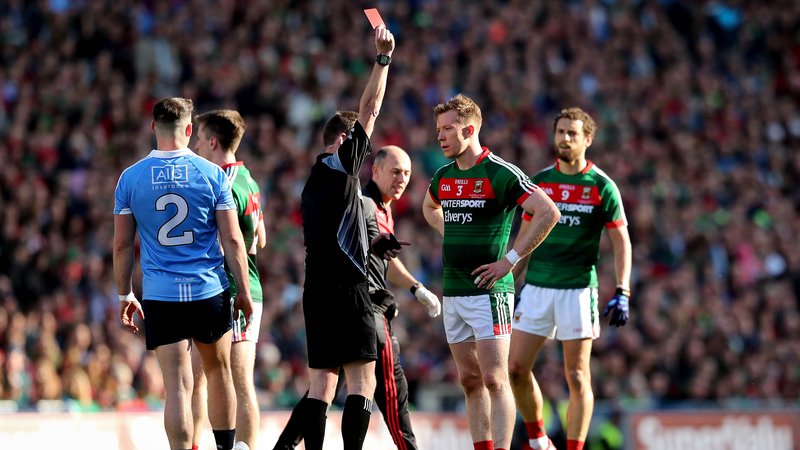 Post All-Ireland last year my brother had a chance encounter with a Mayo supporting friend of his. Sifting through the rubble of yet another defeat, the friend was downtrodden and devastated, as only Mayo fans can be. “If only” he said mournfully “If only Rob Hennelly hadn’t dropped that ball…” To which my brother furrowed his brow and pithily replied “Yeah, but If he hadn’t dropped that ball, Mayo would still have found another way to lose it” It was a pertinent point. It cut right to the heart of the matter. Well he was right then. And he’s right now.

Mayo, Mayo, Mayo. In a way, you can take whatever was written/spoken after last year’s replay and re-post it now. Fantastic game, proud performance, but in the end, no trophy. So yes, we know they are the most resolute, entertaining, honourable team you can find, but nothing, in a way has changed. Last minute free missed? Check. Moment of madness costing them? Check. Forlorn howls of derision against refereeing decisions? Check again. Those guys from 1951 keep on surviving and Mayo are still finding ways to lose All-Irelands.

Of course, anytime there’s a focus on Mayo post All-Ireland, there is an immediate outcry of disquiet from supporters in the capital “And what about Dublin? Do they not deserve credit? People are just jealous”. So yes, without doubt, Dublin are a great team. You don’t win 3 All-Ireland’s in a row without being one of the best sides of all time, and they are certainly with the Kerry outfit of the 70’s and 80’s in that exalted company. So fair play, they are fantastic, and deserve to win. But even they must be scratching their heads somewhat at the fact, that, despite the fact there’s only been a score difference in all of their finals this decade, they’ve won 5 All-Irelands and poor old Mayo have won none.

Then again, that’s not Dublin’s problem. And it’s not just the fact that they have the biggest population and resources, you have to make it count. The fact, is Dublin are, just fractionally, better than Mayo. But what is “better”? Sure, Dublin had a plethora of attacking subs to bring in, and did so from half time onwards. Kevin McManamon and Diarmuid Connolly both contributed massively, and how anyone can think Eoghan O Gara is a better starting option than either of them I will never know. But it wasn’t necessarily greater technical ability that won them this All-Ireland. They won it because they were smarter.

Games hinge on specific moments. Anyone who watched the All-Ireland hurling semi-final this year will know that Cork were well in the contest, dominating in fact, until their full back Damian Cahalane was sent off with 15 minutes to go, from which point Waterford powered to an easy victory. In the 46th minute of this game as Colm Boyle surged forward he was met by a frontal charge from John Small. The Dublin centre back, already on a yellow card, would have had to have been sent off by the referee. It was the obvious call. And then something quite ridiculous happened.

In that very moment, it doesn’t matter how big the population of your county is. It’s not about how many sponsors you have, the amount of training you’ve done or the amount of money that’s been invested in your team. It’s about being 7 or 8 years old on a GAA pitch during one of your first sessions as a player when your coach tells you: “Whatever your opponent does to you, don’t retaliate”. And even when you don’t know the meaning of the word, you know that it’s wrong. If somebody hits you on a field, don’t automatically hit them back. But in the biggest game of their lives, in the most pivotal moment, a player so experienced as Donie Vaughan committed an offence that you would scold a child for. And that really is quite unforgiveable.

It was an automatic red card. And from a position where Mayo would have had a free from 40 yards out to go level, with half an hour to play against 14 men in an All-Ireland final, they found themselves a point down, with 14 on 14, and losing a throw in. Now that wasn’t the ONLY reason why Mayo lost this game, but for sure it was a hell of a contributing factor.

It’s going to be a long winter for Donie Vaughan. I don’t know what the reaction was to him in the Mayo dressing room post game, but just like Rob Hennelly suffered last year, solace will be in short supply. Hennelly’s misery was caused by human error, perhaps nerves on the biggest occasion. But Vaughan’s “crime”, if you wish to call it that, was much worse. It was just a moment of complete stupidity.

Now for those who wish to deflect attention away from Vaughan, there has been some ire directed towards Joe McQuillan post game. Now I always feel that any criticism of a referee should be tampered with a large dollop of “Well, would you do a better job?” Frankly the level of scrutiny with subject referees to is ridiculous. In a packed stadium of baying supporters, with 30 guys hammering into each other for 70 minutes, you’d need multiple eyeballs to spot everything that’s happening. Even with the extra officials around the ground, there are bound to be some incidents missed.

So yes, taken in context, the O’Gara eye gouge incident looked pretty gruesome, but it would have been very hard for any referee to pick up on it without the benefit of a number of television replays. If he didn’t see it, he can hardly really be blamed for it. The “phantom free” where Ciaran Kilkenny and Paddy Andrews clashed into each other was ridiculous but Mayo were similarly lucky to win a free early on in the second half. There is a sort of wilful myopia on supporter’s behalf to pin a loss on the man in the middle.

As for the Lee Keegan penalty incident, well it probably should have been awarded yes. Richie Power was granted a similarly controversial penalty for Kilkenny in the 2009 All-Ireland final on the basis that, even though he was originally fouled outside the small rectangle, the foul continued into the parallelogram. Then again, if they were awarded it, would you have backed Cillian O’Connor to score it, in front of a baying Hill 16 of angry Dublin supporters? Maybe. Or maybe they were better off with the pointed free.

All of this, of course, is conjecture. So, let’s just suppose that Mayo had won a penalty, that Jason Doherty had buried his goal chance, that Donie Vaughan hadn’t had his moment of madness and that Cillian O’Connor’s injury time free had found its way over the bar. Would Mayo still have found a way to lose it?  Is there something pre-disposed in this team, this county’s, condition, that they just simply cannot find a way? Because there’s a width of a cigarette paper between these teams, but, for whatever reason Mayo keep coming down on the wrong side of it.

You can complain all you like about injustice and refereeing decisions but if you’re 2 points up with seven minutes to go in an All-Ireland final and don’t close it out, well… that’s on your head. Mayo can scream at the sky if they wish but when you get a chance as golden as that, by god, you better take it.  It’s like Mayo are the anti-James Bond. For 007, no matter what kind of fatal situation he seems to find himself in, he will manage to escape. But no matter what happens between now and whenever we walk off this mortal coil, will Mayo still find a way to lose All-Irelands? You would imagine that, having lost their last 3 finals by a point, sooner or later the law of averages would start to work in their favour. But they’ve seemingly stopped applying to Mayo a long time ago.

Whenever we reach this stage of the season all the sages from across the GAA world conduct the post mortems and sagely shake their head saying “Ah Jaysus, Mayo, they’ll hardly be back, will they?” Well, of course they’ll be back. A boomerang couldn’t return more often than them. It’s always thrown at them that they’re getting older, but with the likes of David Drake and Conor Loftus, there was probably more of an infiltration of youth in this Mayo team than what’s happened in the last few years.

Ultimately this season has been a failure. But there has been a world of positives. Kevin McLoughlin has had his best year. Andy Moran: likewise, and he will surely be back. I just hope we’re not still saying “Mayo are too reliant on him” when he’s hobbling around in a Zimmer frame. Aidan O’Shea had a decent game although he faded in the later stages. Not scoring in an All-Ireland final is not a statistic that does him justice and something he will have to right one day. I’m sure he and the rest of his teammates will, after a period of mourning, be chomping at the bit to return again. So, Mayo will be back. And we need them, because it would be an awfully dull championship without them. But will they win it soon? Jesus, well, whatever I said last year…let’s just copy and paste it, shall we?

A final note on this would be to thank both sets of players for giving us an absolutely absorbing encounter. We already know that Mayo are one of, if not the most enjoyable team to watch in sport, but these games against Dublin seem to have that little bit more drama, if that were possible. It would really whet your appetite for the Super 8’s next year. Actually, scrap the super 8’s, let’s just have the Super 2’s. From August onwards next year we should have a NBA style 7 game series where Mayo and Dublin face off every week to decide the best team. That would be interesting, wouldn’t it? My money is that Dublin would just come out on top at the end of it. Why? Because…well….it’s Mayo isn’t it?