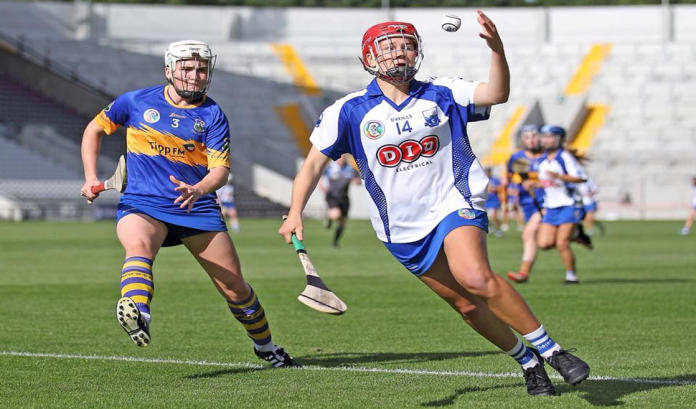 Waterford will be extremely unhappy at their exit from the All Ireland Camogie Championships at the hands of Tipperary after failing to show up in second half.

Trailing by 2 points at half time after an opening 15 minutes that was tight, tense with space hard to find, Waterford left themselves in the box seat at the break with a nice wind to play with and just 2 points adrift.

However it was Tipperary that came out swinging and a monster effort from the brilliant Cait Devane laid down the intentions of the Tipperary women for the second half.

Waterford simply offered little in the second half to compete against a Tipperary side full of leaders, Mary Ryan, Karen Kennedy, Aoife McGrath, Cait Devane and Aine Slattery just up from minor.

It’s going to hurt for Waterford over the next couple of days and a frustrated Fergal O’Brien spoke honestly after the game “It’s devastating, I couldn’t fault the efforts today but we never got going”

The game had alot of stoppages in the second half and no real spark could be lit by the Deise women even at the death when a couple of frees targeted at creating a goal chance fell short and came to nothing.

The Waterford management will now use the experience of this year to attempt to eradicate the unwanted stat of 3 successive losses in the playoffs.

Next up for Tipperary, the tribeswomen.

Goalless Galway make their point against a tame Dublin