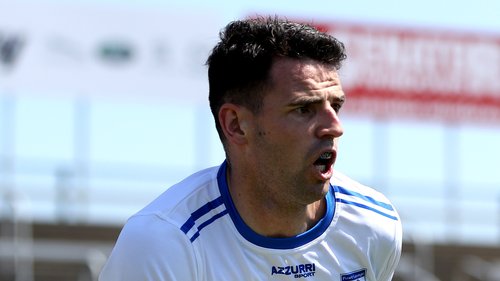 Waterford have picked up their second league win of the campaign after a vital win over Antrim who lead by five points at one stage in the game.

Waterford finished the match very strong as they outscored their opponents by 1-3 to 0-00 in the final stages of the game at Carriganore.

Played in front of a crowd of only just 86 spectators, the weather make it extremely difficult for both teams and with a heavy emphasis on defence, scores were hard to come by.

Both sides played out a very cagey first half a half that saw them level on five occasions but thanks to JJ Hutchinson’s late point the hosts had a narrow lead at the short whistle 0-6 to 0-5.

The heavens opened in the second half as the wind all but died down, and Antrim took full advantage in the opening period. When Mc Bride kicked over his fourth point from play the sides were level once again. The opening goal of the game came from Stephan Beatty when he got a fist to Ryan Murry’s cross and further scores from Colm Duffin and Ryan Murry seemed to have the saffron’s home and dried with only seventeen minutes left to play.

However, this would be the last score than Antrim would get, as Waterford’s purple patch began to kick in and when Antrim keeper Padraigh Nugent lost possession of the ball in the 57 minute Dylan Guiry was on hand to finish the ball to the back of the net. Further scores came from Sean O’ Donovan and JJ Hutchinson which meant the sides were all square as we reached the conclusion to this game, but deep in injury time and on a mission to win this game, full-back James McGrath attacked with purpose and scored a delightful point to seal the win for the Munster men.

U/21 All Ireland Football Final: Dublin to edge out favourites Galway

McGinn will always be a loyal Tyrone supporter