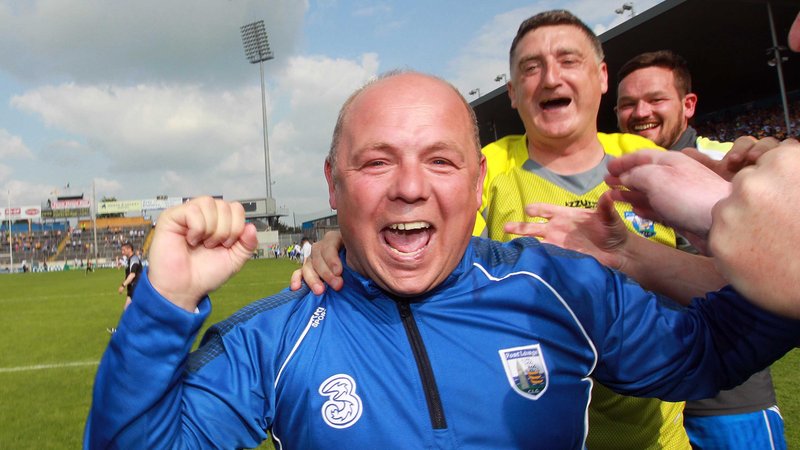 Yesterday, Derek McGrath announced he would be stepping down as Waterford hurling manager after 5 seasons in charge, with his last match being a 1-23 to 1-20 loss to Cork in Thurles a day earlier.

The De La Salle man was one of the most liked managers in the game and in a sincere and heartfelt statement released last night said:

“Tonight I have informed the Waterford County Board of my decision to step aside as manager of the Waterford Senior Hurling team. The relinquishing of my position comes after five thoroughly enjoyable years working with the most committed, dedicated, honest and genuine players to represent our county.

“First and foremost, I wish to thank my wife Sarah, my two boys Fionn and Odhran, my parents and sister and indeed Sarah’s family for their unwavering and unequivocal support during my tenure.

“This journey would not have been possible without them, and I thank them from the bottom of my heart for sharing the experiences, for the encouragement they gave and the steadfast belief they had in me. No greater love could be shown.

“Having the opportunity to work with and learn from a backroom team whose professionalism, expertise and knowledge was matched only by their altruism resulted in a complete unity of approach.

“It was a huge honour to learn from you all and I will be forever indebted to you. I would like to especially thank my selectors Dan and Eoin. Loyalty, sincerity, excellence and totality of effort were at the heart of everything you gave.

“I want to put on record my appreciation and thanks to the Waterford County Board for appointing me for a period of five years and Club Déise for their vision, their generosity and their commitment to excellence in good and bad times. To my close circle of friends who gave selflessly in every capacity seeking neither notoriety nor acclaim, thank you.

“Waterford is a special county with special people. People defined by their resilience, their authenticity and their creativity. I thank the Waterford people for recognising these traits within this team and uniting behind them over the last five years.

“These characteristics were evident in abundance again Sunday last, and I implore the great Déise supporters to continue on this journey with these lads acutely aware that implicit in your viewpoint must be the stark reality that sport, like life, will see setbacks along the way, which we must see not as adversity but as part of the path which can be overcome together.

“During my term, I can honestly say that I held nothing back. This complete immersion would not have been possible without the support and guidance of the management, staff and community of my beloved De La Salle College. I always felt that I was representing the intangible spirit of our great school in everything I did.

“Finally, I wish to thank and pay tribute to an incredible bunch of players that I have had the honour to manage over this five-year period. The joy, the tears, the sense of camaraderie and the memories shared will stay with me forever. Embarking on this journey with a group of young players we aimed to cultivate a culture of honesty, integrity and pride everytime we represented our beloved county.

“Witnessing your growth and watching you represent Waterford on and off the field with the unity of a tight-knit family filled us all with immense pride. Whilst we committed ourselves to be the best we could be as a management, we also challenged you to be the most diligent team ever to represent Waterford and you responded by giving everything you had every day, which became our team motto – GACH RUD. GACH LÁ.

“You have been a credit to yourselves and I thank your families and partners for inculcating in you a sense of decency, a humility and a work ethic that will stand the test of time. The greatest compliment I can pay both players and their families is the hope that I can continue to rear my own family with the underlying traits that are inherent in you all.

“This team will be forever ingrained in my heart. Returning to family and school life, I hope to learn from the values and principles that you stand for. I look forward to applying these learnings into the future in differing capacities.

The last sentence “GAN STAONADH LE CHEILE. GACH RUD. GACH LÁ “( Together giving it everything, every day)  portrays what McGrath has done since taking charge of the Deise in October 2013 after Michael Ryan’s exit.

The 42- year- old’s only trophy during his tenure was the 2015 National League after a 1-24 to 0-17 win over Cork which saw captain Kevin Moran raise the title. This was Waterford’s first league success since 2007. McGrath also led Waterford to their first All-Ireland Final for 9 years last year, only to be beaten 0-26 to 2-17 by Galway.

However in this year’s Munster championship things didn’t go as well as Waterford only earned one point from their four games, drawing with Tipperary and losing to Clare, Limerick and Cork. Injuries to key players and the controversial goal awarded to Tipperary which denied his side a win in the 2nd game did not help their cause. 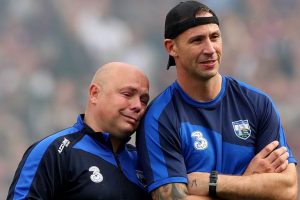 In one of many touching tributes paid to McGrath today, Waterford star Austin Gleeson said “I’m absolutely gutted that Derek McGrath who has done so much for this county, myself on a personal level and anyone who has dealt with him is stepping away!! The amount of work he has put in that nobody realises is incredible! He will be sorely missed by this whole team!!”

McGrath still had one farewell to say as the whole squad and backroom team joined him at his home last night. He said “We had a bit of a sing-song, we had a few pints. It was very emotional, we were reminiscing on things. We have always said, even if it sounds a bit corny, part of our whole ethos is to make memories, good or bad. Last night will live with me forever.”

There’s no doubt he will be wanted by other teams over the coming months!!!

How many of these guys turn up for your G.A.A. club...