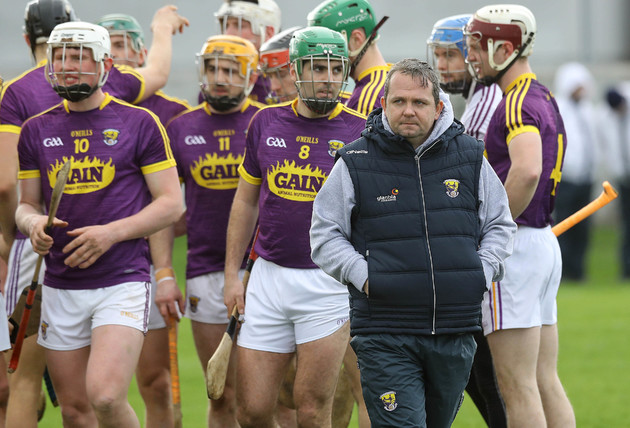 Old foes Kilkenny and Tipperary played out a thrilling 3-14 to 2-17 draw at Semple Stadium on Saturday in front of a crowd of around 15,000. TJ Reid was the Cats star man yet again proving his worth in the Kilkenny attack contributing 3-05 of Kilkenny’s total of 3-14. Richie Hogan although quite in the first half was superb in the second half for Brian Cody’s charges. Cillian Buckley also excelled in midfield. Tipperary started the game well and John McGrath who finished with 1-02 from play had the opening goal of the game inside 3 minutes. Seamus Callanan also played well for Tipperary in attack, while the Maher brothers, Padraig and Ronan were again outstanding in defence for the Premier men.

These teams could again possibly meet later on in the year and if we get what we seen on Saturday night last it will be another amazing encounter. In their final round of games Tipperary will play Cork, while Kilkenny will travel to Parnell Park.

Davy Fitzgerald has led Wexford to promotion to Division 1A in his first year in charge. Wexford secured promotion to the top flight with a 1-17 to 0-15 win over Offaly at Tullamore on Sunday and that win means Wexford will play in Division 1 for the first time since 2000. Conor McDonald was the standout performer as he led Wexford to victory.  To be fair to Wexford they are fully deserving of getting promoted, they beat Galway and Limerick who were both firm favourites to be in the hunt. The return to the top flight will be a massive boost to Wexford hurling and will now see Wexford Park host big Allianz League match days.

Wexford play host to Laois in the final round of games, where Davy will be hoping his side can maintain their 100% thus far.

Waterford were well and truly outplayed in Walsh Park on Sunday by their near neighbours Cork. The Deise were very poor though and they could have been beaten by more. Waterford elected to play against the breeze in the opening half and may be that was their downfall as Cork went in at the break in command 0-12 to 1-04. Luke Meade and Conor Lehane were superb for the Rebels, while in defence Mark Ellis was outstanding and commanding from centre back.

Waterford are still not out of the relegation zone so they will be looking for a win over Clare in the next round, while Cork will play All-Ireland Champions, Tipperary.

Clare despite going in at the break 1-10 to 0-08 clawed back the scores in the second half with the aid of a strong wind to get over the line by 0-20 to 1-15 against a youthful Dublin side on Sunday. Seadna Morey was superb for Clare scoring two fine points from play from corner back, while David Reidy, Cian Dillion and Ian Galvin were also excellent. Clare will look for back to back wins now for the first time in this year’s league when they play Waterford in their final game, while Ger Cunningham’s Dublin will host Kilkenny in Parnell Park in two weeks knowing that the game is a must win in order for them to survive in Division 1A.

Laois were well and truly put to the sword on Saturday night against a rampant Limerick side in Portlaoise. The Shannonsiders amassed a total of 6-33 in a fine win over the O’Moore County. Gearoid Hegarty, Kyle Hayes and Shane Dowling were all superb in attack, while in defence Seamus Hickey also stood out once again.

Things don’t get any easier for Laois as they travel to promoted Wexford in two weeks, while Limerick will meet Galway in what is expected to be an exciting encounter.