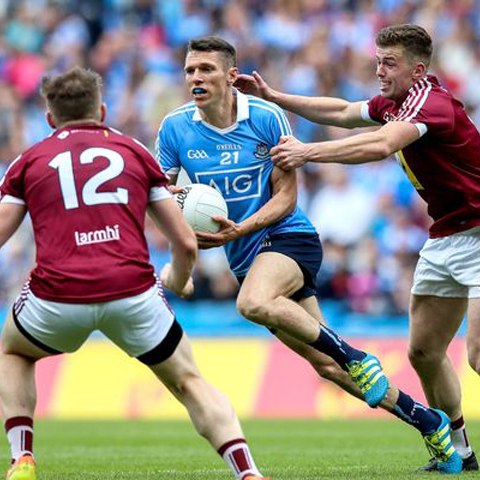 Sportstalk.ie have a look at a number of reasons why Westmeath fell to a 31pt defeat last Sunday, its a dark day for Westmeath a proud county with some fantastic people hurt and dismayed but the Lakers’ will rise again. We give our opinion on why they fell so badly – Do you agree?

Westmeath’s idea of defensive football is a strange one. They lined out with four half forward’s and two inside, quickly going with 11 defenders, two midfielders and two up top. However they had no center back. This lead to Dublin quickly figuring this out and had multiple goal chances with players gliding through the center untouched. In fact the way the game panned out in the first half neither team had a center back. It must be noted that Westmeath’s number one center back recently had an operation for a torn knee ligament after the win over Offaly. Rule 1 of football is make sure you have a sturdy center back do you agree?

Management Out of Depth

Westmeath’s management were clearly exposed on Sunday both tactically and with their lack of game management expertise. Every man and his dog were warning Westmeath not to set up defensively, not because it doesn’t work but mainly because teams across the country including Dublin have it figured out. A typical example of this was the Munster Club final where Dr Crokes exposed The Nire to how horrendous the tactic is once playing against a good side. If you haven’t seen that game go watch it! Dublin played with seven forwards and purposely passed the ball from line to line smoking out the Westmeath defense, while choking them with relentless running. Westmeath management never changed anything just stood on the line arms folded watching a flawed tactic exposing Westmeath to the mother and father of a beating. Westmeath also had a runner tasked with the job of carrying instructions from manager to players, we would love to understand what those instructions were and if they even made sense.

The fact in Westmeath is that at club level teams are struggling both with numbers and interest. I don’t buy into Dublin have better resources argument, but here is the key difference for Westmeath. 90% of the talented players within each club are playing soccer, rugby and even hurling also. If you were to ask every Westmeath underage manager, what are the biggest challenges he faces, they will all tell you trying to get the best players to turn up training and play football. That maybe where Dublin and the bigger counties have an advantage in that they can tell a young lad to choose between the two. There is a typical case for that when Westmeath U/17’s play Offaly this Wednesday night four of the team are gone on holidays. Westmeath do have the players to compete and ample resources but until Mammy and Daddy buy into Gaelic Football instead of Premiership Soccer for their son, a Z Tier championship will have the same outcome.

Westmeath’s backroom staff have alot to answer for with regards to their fitness levels compared with previous years and the grip about two games the previous week is not an excuse. Westmeath’s currently panel of players have alot of mileage on the clock at the minute and are heading for their thirties. They have given great service to their county over the past 10 years and its unknown if many of them will stay motoring for much longer. It would be interesting to know what exact training Westmeath have been doing over the past number of months because it wasn’t attacking football and from what the country seen on Sunday they were not fitter than Dublin who were combining the two.

You can talk all day until the cows come home about Dublin’s resources it’s not the issue. You have the same in every other county in Ireland, water, food and space to improve your movement. Dublin players movement telepathy and desire was a joy to watch. I’m not sure the Hill 16 folk have a proper view of their teams movement but from the Hoganstand its breath taking. Dublin have changed their angle of attack, with darting incisive runs and acute turning techniques. They have become so accustomed to playing against the blanket defence now that it doesn’t phase them to see the opposition team bus also sprawled out across the 21 yard line because they will setup and assault on the goals to bypass all obstacles. Westmeath were rabbits in the headlights with some of Dublin’s movement and essentially looked like a team at the end happy for that headlight to run them over.

Sportstalk.ie is a players website and we don’t believe Westmeath players deserved the hammering they got last Sunday, they are a much better side than what we seen, rise up again Westmeath and go for it against Armagh.