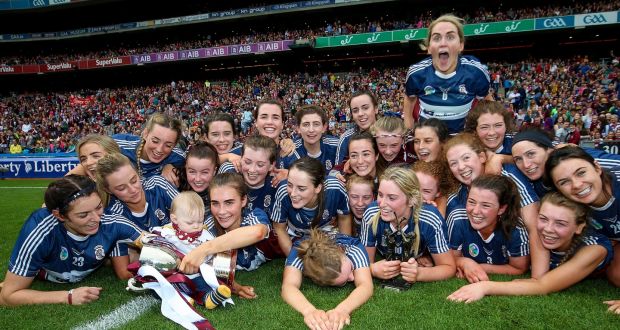 Trailing by seven-points at haft time in the second set of Camogie games played in Croke Park saw Westmeath take the honors in the second tier decided to claim Senior status for 2020.  You often wonder who writes the scrips for these games as it certainly didn’t go to plan with many tipping Galway to come out as winners and having dominated the opening half to lead by seven you would expect for them to push on and to see it out to the final whistle.

Surprising enough Westmeath came out in that second half and tore up the scrip as they clawed their way back into the game as they kept the tribes women scoreless until the sixty-fourth minute, meaning that for the first time ever in their history a team from Westmeath will be playing Senior Camogie just two years previous they claimed the Premier Junior title also. Player of the match Pamela Greville was immense scoring nine points, three of them coming from play she was well supported in attack by her team mates Megan Dowdall and captain Mairead McCormack, who goal in the forty-first minute swung the tie in the Lakesiders side.

This game had everything from great points to hooking and blocking and not to even to mention the dramatic start to the game when the referee had no one choice to award a penalty after a foul was committed on Galway’s Mairead Dillon, but the resulting penalty by Rachel Monaghan was expertly stopped by Meadhbh Scally.

This game had you on the edge of your seat as it had so many twists and turns in the end the outcome went in favor of the Lakesiders who will no be looking forward to playing Senior camogie next year.