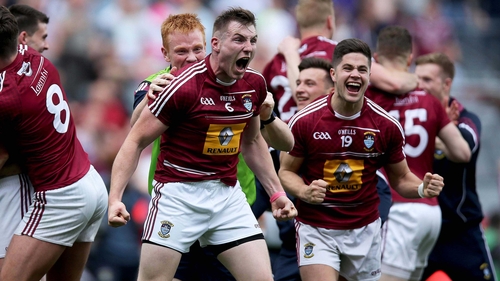 Over the last decade there have been many great sporting achievements that we all can look back on, from Kilkenny’s drive for five been halted by a great display from the premier outfit, then you have Limericks long barren spell of 45 years for an ALL-Ireland coming to an end and to crown things off Dublin becoming the first team to win five in a row.

But for the people of Westmeath and its players the stand out moment for them was the 2015  Leinster Semi-Final victory over rivals Meath in a game which saw the royals leading by eights points at half time but a stunning second half display by Westmeath saw them score their highest ever championship score to win by four points in the end after Meath goalie Paddy O’Rourke was sent off in injury time.

One player that’s only knows too well at playing in Croke Park and scoring 2-3 on that day is the current Westmeath football captain Kieran Martin. Speaking on the latest edition of the Sports Talk podcast Kieran said “The way we did it we were eight points down and I was luckily to get the score’s on the day and you could see how much it meant to the people  of Westmeath”.