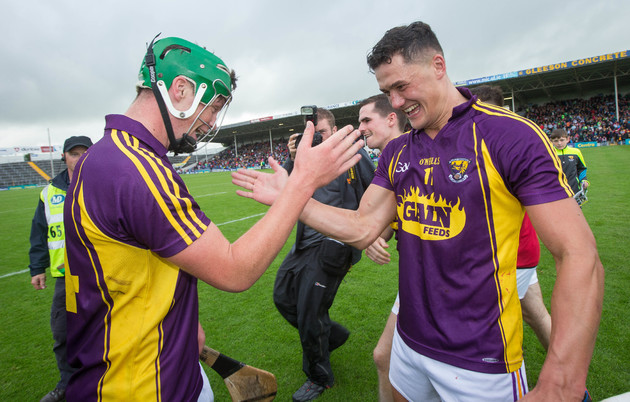 Well, they did it. We knew there was something stirring in the sunny south east this Spring. The fact that they got promoted from a fiercely competitive Division 1B told us as much. But though there’s been considerable media interest in the Davy revolution in Wexford, it’s fair to say that, until now, people haven’t invested in it with real belief. Well believe it now baby!

Last Sunday’s stirring league victory over Kilkenny in Nowlan Park, the first-time Wexford have managed such a feat since 1957, is further vindication of the decision the county board took in hiring the most beloved/hated/controversial manager in inter-county hurling last October. You can question his demeanour and his methods all you like, but you can’t argue with one salient point: in the short-term at least, Davy Fitzgerald’s management gets results.

It’s been fashionable over the past few weeks for people to trot out the patronizing line “Well, whatever happens from here on, Wexford have had a good year….” as if to say the season ends in April. As if to say getting promoted from Division 1B should be the limit of their ambition. Such defeatist logic is the reason why the county has been in the doldrums for so long. It’s the reason why they won one All-Ireland in the 90’s, and have celebrated it for 20 years since.

If it sounds like I’m raining on the parade here, then it’s not intentional, but in life, there’s a reason why the likes of Roy Keane and Brian Cody succeed: they don’t accept failure. Wexford have tolerated mediocrity for too long. They’ve looked on an All-Ireland quarter final or semi-final, as “having a good season” without any indication they’re going to kick on from there. Do you think Brian Cody is clapping himself on the back that Kilkenny survived in Division 1A this season and saying “Well, whatever happens from here on, we’ve had a good year…”?

Wexford fans were invading the Nowlan Park pitch at the final whistle and while their enthusiasm was endearing, there was almost a sense they were setting themselves up for a fall. They’ve been here before you know. In 2014 they descended en masse to Semple Stadium in anticipation of their All-Ireland quarter-final against Limerick. And there really are no better fans than Wexford to jump on the nearest bandwagon wandering around.

Amidst the elation of victory though, there needs to be a time for cool heads. Because, really, it shouldn’t have been that much of a surprise that they won. I mean, it’s not as if this is a 2 bob outfit cobbled together after mass. The fact is, with the ability this Wexford team have in the side, they SHOULD be expecting to beat Kilkenny. It was deemed to be this massive step down for Davy Fitzgerald to take over a team so far down in the pecking order as the yellow bellies last year, but despite the lukewarm reception of the Liam Dunne era, it’s forgotten that the side took some major scalps during it. They beat Waterford and Davy’s own Clare side, who were then All-Ireland champions, back in 2014. They knocked out Cork in last year’s championship. They’ve made 2 of the last 3 All-Ireland quarter finals. Granted things didn’t work out great in either game, but at least they got there. And all of this while missing some of their most talented players.

That’s without even mentioning what happened in the underage scene. They’ve won 3 Leinster Under 21 championships in the last 4 years, one of which involved beating Kilkenny in Nowlan Park by a sum total of 17 points. There was plenty of potential to be mined in the county. It just needed the right manager holding the reins in order to get the best out of them. On the basis of what we’ve seen so far, they certainly have that now.

Wexford’s semi-final against Tipperary in 2 weeks time, is a great opportunity for them to get to a league final and try put some silverware on the board. But even if they do succeed in winning the competition, why should they set their sights as low as that? Why not dream of the championship?

Again, I can already hear the cries of “Don’t be ridiculous” from the back rows. But answer me this. Is the prospect of Wexford winning an All-Ireland title this year any more outlandish than the idea of Clare winning it at the start of 1995 was? Or the same county doing so with this man at the helm in 2013? Or even Wexford themselves winning it in 1996? With perhaps the exception of 1997, Davy Fitzgerald has never won the biggest title from the position of favourite. So, if Wexford do want to pull off the biggest heist in recent hurling history, then they’ve got the right man to do it.

And yes, I know that it’s a hell of statement to make at the start of April. But as regards contenders for this year’s All-Ireland, who do you think will win it? Waterford? They’ve been making progress for sure, but it’s still a bit of a leap to imagine them climbing up those steps in September.

Galway? They’ve certainly got the talent, but Wexford have already come from behind to beat them, away from home, in the league. And obviously, you could argue it was “only” the league, but don’t tell me the Tribesmen didn’t want to win that game and get promoted, because I’m certain they did. Ditto Kilkenny. Brian Cody doesn’t do friendlies, so if his side can’t defeat their neighours at home in April, there has to be a question mark over whether they can do it away come summer time. Clare? They’ve been in tailspin for three years now and, if we’re to use their league form as a guideline, it can’t be pinned exclusively on Davy’s leadership. So, if all those teams are beatable, who else do Wexford have to fear?

The elephant in the room is obviously Tipperary. Well, they’re certainly the most talented team in the country at the moment, and their meeting against the Slaney boys on Sunday week will tell a lot, but we all know what Tipp are really like. They’re hot and they’re cold. They’re yes and they’re no. They’re in, then they’re out, they’re up then they’re down. Sure, if you give Tipp the chance to beat you by 20 points in a shootout they will. But if Wexford, or anyone else, really put the premier to the pin of their collar in August and September, are you betting your house they won’t back down?

So for all those Wexford supporters on the pitch in Nowlan Park on Sunday, ask yourself this. Is this all you want your team to achieve this season? Because, if so-great-you’re easily pleased, but don’t you think you could be getting more? The theory is that victory comes through baby steps. But for Clare 1995, Wexford 1996, Clare 2013, it was more like one giant leap.

The belief is that having a good season this year will help Wexford “in the long run” Yet, as the economist John Maynard Keynes once memorably said “In the long run, we are all dead”. We’ve heard all sorts of backslapping about how Wexford have “had a great season” Well, right now, we don’t know if they have. But come September we will. So, for all those tired happy bodies in the Nowlan Park changing room on Sunday, don’t see this as an end, but merely a beginning.

Don’t talk about 3 year plans, and building for the future. Talk about how you could be one of the only living men in your county with an All-Ireland medal in their back pocket. Because, despite all the naysaying and guffawing, there’s a massive opportunity in front of them. We have no idea what will happen next season. But, if there is a time for Wexford hurling, it’s now.

Kilkenny will be delighted that they are still in the championship...