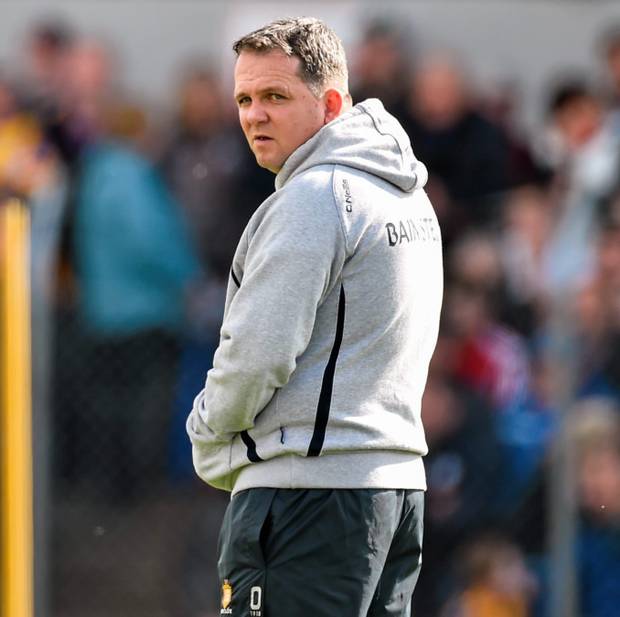 He’s back! It’s been such a short time, it would make you think he was never away (He wasn’t). But one thing’s for sure, he’s most certainly back now. After the briefest of hiatuses possible, Davy Fitzgerald, is, once again, firmly stuck on the tumultuous treadmill that is inter-county management.

Now I know there are certain people out there that think he shouldn’t have come back so quick. He’s just come out of a painful divorce, and we all know that the rebound relationship doesn’t work. Just ask Jordan. Or Kerry Katona. Or Brangelina. But you might as well face it, when you’re addicted to love, (or hurling) sometimes there are offers you just can’t refuse.

The shortness of his sabbatical isn’t the only reason why people thought Davy Fitzgerald should have spent more time away from the game. There are of course, health issues. Maybe Clare’s poor performance in the All-Ireland quarter final this year wasn’t directly linked to his heart surgery in the same week. It could hardly have been a help though. And this came after he was reported to have a 95% artery blockage in 2009, with his doctor saying he was in “heart attack territory”.

Davy Fitzgerald is a man who gives absolutely everything to hurling, and sometimes it’s too much. It’s easy for us to say he should take a step back from it. It’s a lot more difficult for him to actually do that. Will inter-county management seriously endanger Davy Fitzgerald’s health? Possibly. Would an absence from the game he loves hurt him even more? Unquestionably.

It’s been an uncomfortable few weeks for him. There’s been a lot of mud slung, a lot of accusations made. But if you leave aside the bitterness and resentment caused by the Clare split, there’s one thing you must still take away: Davy Fitzgerald IS a good inter-county hurling manager.

Before you guffaw in exasperation, let’s state the case for the defence. He’s the only man to have taken Waterford to an All-Ireland senior final in the last 50 years. He’s one of only two men to have managed a senior All-Ireland winning Clare team in the last 100 years. Now, you can debate ‘til the cows come home about the tactics and style. But you can’t argue with those facts.

As for the whole “rebound” thing, it mightn’t be the ideal scenario to get back into bed with the next county you meet, but it’s not necessarily always the worst either. If you haven’t already seen it, or even if you have, I would advise you to check out the wonderful Paidi O se documentary “Marooned” on Youtube.

In 2003, Paidi  was being physically attacked by his county’s own supporters in Croke Park, after Kerry had been eliminated from the championship by Tyrone’s “puke football”. The next year he was being lauded as the saviour of Westmeath football, by leading them to their first ever provincial title. Now, it would be a brave man who would back Wexford to get All-Ireland, or even provincial, honours next year. But with Davy at the helm, they have an undeniably better chance.

Clare’s performances in the last three years have been underwhelming, but it could just be that things got stale. Davy’s management style, a la Loughnane before him, demands absolute commitment and intensity. And while that may be sustainable for a couple of years, it’s unlikely to reap the same rewards in years 3 and 4. Particularly when there’s not always an influx of fresh talent to embellish the existing squad.

There are some managers in this world (Brian Cody, Alex Ferguson) who thrive on longevity. Nothing so motivates them as being able to rebuild and regenerate their teams again and again. On the flip side, there are others (Guardiola, Mourinho, Davy) who operate best in short, sharp bursts. You could say Davy Fitzgerald failed in his last 3 years as Clare inter county manager. You could also legitimately point out, he achieved everything he needed to do in his first 2. He’s got a three-year term, but he will be hoping to achieve something similar with Wexford. Let’s remember, 2 years was enough for Liam Griffin.

Taking a look at this from the other side of the coin, the appointment was an absolute no-brainer for the Wexford county board. In the last 5 years under Liam Dunne there has been a stagnation in the county. It hasn’t necessarily always been awful: the 2014 and 2016 season’s brought the respectability of a quarter final. But then again, it hasn’t been a bundle of roses either.

There’s an argument to be made that, despite his longevity, Dunne underachieved as Wexford manager. In his 5 year tenure, despite winning three Leinster under 21 finals, they never even competed in a senior provincial final. Where are the under 21 heroes who beat Kilkenny by 17 points in 2015? Where is Jack Guiney, one of the most talented forwards in the county, and a match-winner on his day? There is a young and talented squad at Davy’s disposal, who, thus far, have under-achieved. That is a perfect platform for him to work with and rebuild his flagging reputation.

There was a lot of nostalgia bandied about this September for the 20th anniversary of Wexford’s 1996 uprising. While it’s easy to mock a county for celebrating past glories, it just re-iterated one point I’ve always believed. Hurling needs Wexford. We need Strawberry fields, Dancing at the crossroads, hearts and guts and passion. Every time they’re in full flight, hurling grounds are alive with songs, colour and “quare bad” accents. Every time they depart the championship, a little piece of it dies. They may not always be the best side, but they’re certainly one of the most entertaining.

And even if we endlessly criticize and lampoon him, or maybe because we do, we also need to say this: Hurling needs Davy. Who else gives us as much entertainment, with his side-line histrionics, terse television interviews and strange tactical manoeuvring? You mightn’t like him when he’s there. But you sure as hell miss him when he isn’t. If nothing else, I bet at least Oliver Callan is delighted with the latest development.

So if it’s good for the goose, it’s assuredly good for the gander. Wexford have got an All-Ireland winning manager on their hands. Davy’s got another pet project to feed his addiction. So what if it’s not a long marriage? There could be a couple of years happiness at least. Like Bishop Len Brennan before him, Wexford hurling needs a kick up the arse. Davy’s a good man to do the kicking.

Fennelly the right man to answer prayers of the Faithful