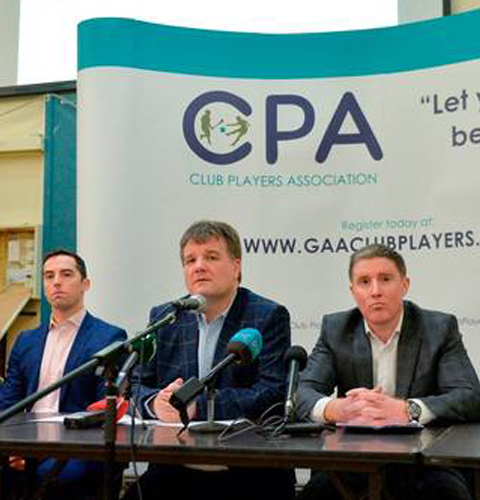 “We know where this motion is coming from and we shouldn’t support it” Frank Murphy has never been known as being one of the most….hmmm, progressive county board secretaries, but the Cork man really struck a chord with a lot of county board delegates at this year’s GAA congress. The subject was the question of transparency in the voting process at the event, and the organization where the motion was coming from was the CPA.

Now the question of transparency in the GAA is a thorny one to begin with. It’s one of the only sporting organizations in Europe, perhaps even the world, where you can’t see how delegates voted at congress. But beyond that, it was the wording of Murphy’s statement that was revealing. In essence what was being said was “We (being the GAA) don’t like the CPA, therefore anything that they are going to suggest, we will reject”. And with the idea of transparency at congress, the rhetoric certainly worked. 83% of the delegates voted against the motion at congress, a massive F you to both the CPA, and also, the vast majority of GAA members who are interested in how their county board members are voting.

The CPA was founded in January of last year with the expressed mission of a “balanced fixture programme” for club players. In theory it seemed like a good idea, and you could argue it was an organization that should have worked well in tandem with the GAA. But the powers that be haven’t seen it like that. Since then, the CPA has been denied official recognition by the GAA and pretty much every motion or suggestion they have made has been shot down in flames. But why is that? Whatever about your opinions on Liam Griffin, Anthony Moyles and whoever else is involved, you can’t dispute the central tenet of their argument. The fixture schedule is a mess. And it needs to be sorted out.

The central issue comes back to the idea of power. The GAA don’t want the CPA exerting influence. Just like, in their eyes, the GPA has done since it became a serious organization. To the GAA it must feel like the CPA are trying to do their job of organizing the club fixtures. And nobody likes being told how to do their own job.

While the delegates at last year’s congress were almost openly hostile to the CPA’s requests, the GAA, at the very  least, did realize that extra time was needed for club players this year. So as a sop to them, the decision of Pauraic Duffy and co was one of, “Here, we’ll give them the month of April and that will appease the”. But it hasn’t.

Now there are numerous reasons for that. Whatever about what you see when you look out the window at the moment, it’s undeniable that the weather in our country for the last 3 months has been somewhat, say, inclement. Now you can’t blame the GAA for that. And also rescheduling fixtures, such as the National hurling league final for the month of April, is another cheap shot at the organization. The games needed to be played, for cash strapped county boards at the very least, so when else were they going to do so?

The problem seems more that the GAA didn’t think out how a designated club only month would play out. Well actually they did. When announcing the new fixture list last August Pauraic Duffy even said “Personally, I think you’ll find that not many counties will play club championship matches in April”. So even though they anticipated the problem, they still went ahead and created it anyway.

Maybe you would want to blame insecure county management teams, who are afraid of their players getting injured while playing club games. This despite the fact that they could easily be injured in county training during the month anyway. Those same managers might, justifiably, argue that they have season defining championship games coming up in May, and any time they have with their county players is precious. And in the interim, the county player is being dragged left and right by vested interests. We’ve seen how Offaly hurlers have refused to for the football clubs this month, http://hoganstand.com/article/index/283754 as they feel it will affect their championship preparation. And that’s happening in many other counties across the country also.

Let’s not call a spade a digging implement here, let’s call it a spade. The idea of setting aside one month aside for the club game in April seemed like a good idea, but the practicalities of it are unsustainable. At best, perhaps 2 rounds of club championship games will be played this month, maybe one. In a lot of counties, no club championship games are being played. Eamon Donoghue from the Irish Times had a superb graphic in a recent piece as to how many club games were actually being played this month. It made for sobering reading.

Now you may have your own opinion of what the CPA is like, and the necessity for them, but when an organization has 25,000 members, it’s clear there must be some issue. And when those members have to put their lives on hold for months on end, on the basis that they “might” have a match next week, then you can easily see their frustration. The irony of it is the CPA shouldn’t be an enemy of the state. In reality, the GAA should be seeing them as partners to work with. Because the more disillusioned club players become with not playing games, the more likely they will either play other sports, or quit GAA altogether. Fewer players means there’s a club game that doesn’t function. And without a functioning club game, elite county level isn’t going to work either.

Everyone, be they from clubs, colleges, county boards, needs to sit around the table and fix this. And the sooner they do so, the better it is for everyone. Forget about 3 year trial plans for a club only month in April. It’s been tried once, and we know it doesn’t work, so why bother trying it again?

The funny thing is, there seems an easily identifiable remedy for the fixture schedule. What about a system whereby the universities are allowed to run off their competitions in January, the inter county season can run from February to late July or August, and the club calendar ran from August until the end of the year? And all the fixtures, both club and county, can be decided in advance months before. Sounds simple doesn’t it? Yeah, of course it does. There’s only one problem. When it comes to the GAA, nothing ever is.