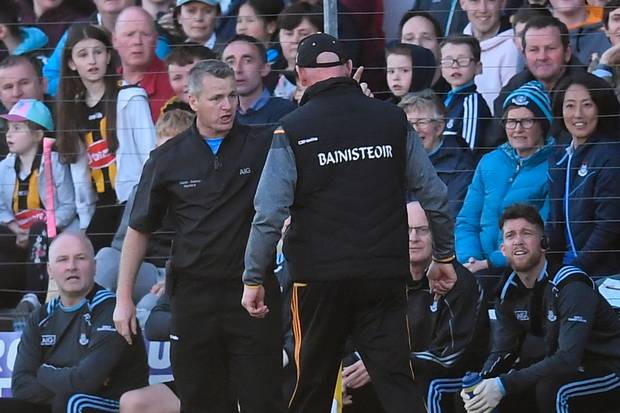 Just in case you didn’t see it, the hurling championship was brought to life with a barnstorming encounter between Kilkenny and Dublin at Nowlan Park last night. The capital side made a highly promising start to lead by 6 points, at one stage, in the first half, but an imperious performance by TJ Reid, Padraig Walsh and a few others managed to overhaul the deficit, and Kilkenny eventually ran out 5 points winners. It was a stirring debut to this year’s hurling championship, but that was not what everyone was talking about coming out from the ground yesterday.

That honour went to an incident that occurred in the 32nd minute of the first half, when stepping up to take a 30 metre free, TJ Reid spotted the figure of Kilkenny corner forward Billy Ryan in space. Unfortunately for him, the fact that Ryan was free, was also noticed by Dublin Selector and “runner” Gregory Kennedy. He decided to take it upon himself to run over to Ryan, and intercept Reid’s free, therefore preventing, what could very well have been a Kilkenny goal. It was an astonishing interruption and one the likes of which could rarely have been seen before.

If Kennedy’s action was completely absurd, what happened afterwards was perhaps even more shocking. No sanction for him? Not a dismissal from the pitch for the rest of the game? Not even a talking to from the referee? In the context of what was a poor display by Cork’s Gearoid McAllister, the lack of punishment was not especially surprising. But from the moment Kennedy entered the game and made his intervention, any hope of keeping control, in what was an already fiery encounter, seemed lost.

Has there ever been a scenario before where a selector, or runner, has so blatantly interfered with the game of play as was seen last night? We’ve seen selectors and managers enter the field before obviously. Davy Fitzgerald was, of course, banned for attacking Jason Forde in a league semi-final in 2017. John Maughan was punched, as Mayo manager after encroaching onto the field, during a game in the 1990’s. Ger Loughnane frequently entered the game as Clare manager, and got a touchline ban for the 1997 All-Ireland hurling final for doing so (not that it worked). But for a selector to have such obvious disregard for the rules so as to interrupt the game himself? That was a new one for me and, I presume, the vast majority of people who attended the game.

Now, for those familiar with their hurling history, particularly in Kilkenny, the name Gregory Kennedy is not a new one. In the 2001 All-Ireland hurling semi-final between Galway and Kilkenny the Loughrea corner back so antagonised a then 22 year old Henry Shefflin that the young corner forward, completely lost his composure and subsequently, his side lost the game. So, needling tactics is nothing new to him, but even so, such an action as what was witnessed last night was beyond the pale. Up until now, it’s been players business to play, and mentors lot to look on from the sidelines. If selectors and managers are going to break the fourth wall in such a way, then chaos will prevail.

The irony of course, is that Kennedy’s intervention did his own team no favours. Sure, in the short term, it may have seemed as if his interception prevented a certain goal for Kilkenny, although whether that would have been allowed, considering the referee was looking in the opposite direction at the time, seems debatable. But his action, being such a blatant example of cheating as it was, only really succeeded in riling the Kilkenny players, that whatever motivation they had for the game, seem to almost double instantaneously. Certainly, you only had to witness Brian Cody’s reaction in the immediate aftermath to see how outraged he was by the incident. At full time, it was a different matter as Cody was more than willing to share a laugh and joke with his counterpart, but would he have been so carefree if Kilkenny had lost? That seems much less likely.

The incident last night also places the GAA in a precarious position: what are they do with selectors and maor foirnes encroaching on the field from now on? In theory, the idea, borrowed from Australian rules, that a Maor Foirne would be allowed on to the field to deliver messages to the players, is a good one, but as Kennedy so ably demonstrated last night, it’s open to abuse. Rumours abound that in the All-Ireland football final of last year Tyrone used their Maor Foirne to try and disrupt Stephen Cluxton’s kick outs by entering the field just as Cluxton was about to take his kick. Whether true or not, it seems possible that something like that could happen, and if Kennedy is seen to have got away with doing what he did last night, then what’s to stop others doing similar?

A heavy fine for the Dublin County Board and long suspension for Kennedy respectively seems the wisest possible course of action that the GAA can take. Then again, how often do the GAA take the wisest possible course of action? Perhaps a suitable media/Sunday game storm will spook the authorities into doing something, because if Kennedy does escape scot free from this, a dangerous precedent will have been set. We await with the interest the results of any enquiry, but the days of a 16th man running onto the hurling or football field, may soon be over.