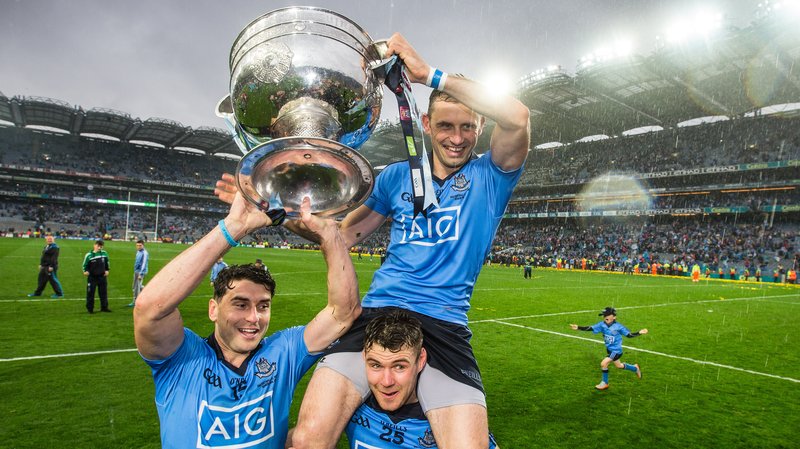 Well, it was bound to happen. After last year’s All-Ireland football final victory, Dublin’s fourth in 6 years, there seemed a collective gloom over the rest of the country. As the team paraded around Croke Park with the trophy, everyone must have instinctively thought the same thing. “Of course they were going to win. They’ve got twice as many people as anybody else. Sure, why wouldn’t they win all the time?”

There’s no denying it. Given Dublin’s population they SHOULD be having huge amounts of success. Their recent record is testament to that. But, funnily enough, for large tracts of the GAA’s history, that was simply not the case. I mean, the fact that their 2011 win ended a run of 16 years without an All-Ireland says it all. In the last few years, they’ve redressed the balance somewhat, but for the majority of their history Dublin have massively underachieved at Gaelic football.

Such sentiments got me thinking on what it is for a county to under or over achieve. So using the most recent census population, and a county’s senior historical GAA record as a guideline I set about my task: finding the biggest over and under-achieving counties in Gaelic games.

Now before we even start with this conversation, it’s important to note there is no fully accurate barometer of success. A true measure of whether a GAA county is underachieving or not, would take a University thesis, rather than a website post.

For example, some counties may have a large population now, but perhaps have had a small population for the majority of their history. And other counties (particularly those from Northern Ireland) may have had largely protestant or loyalist populations, who haven’t fully engaged with the playing of Gaelic games. These counties may look like they have underachieved, but unless we get full statistics on playing populations, it’s hard to deduce if that is the case.

Some counties may have suffered from dedicating their energies to both codes rather than specializing in one code like Kilkenny have done. And I have taken outright titles over a 130 year history, but you could argue it would be better to use last year’s statistics, or statistics from the last number of years to determine how well a county is doing. Or percentage success rates in games rather than outright titles. I acknowledge that my rationale is crude, but given all that, we’ll try and have some fun with the numbers anyway.

[jtrt_tables id=”5462″]
No real surprises here. Kilkenny will feel that the statistics vindicate their position to only prioritize hurling. Of course, there’s been a lot made in the last few years about the county’s lack of a football team. At the same time, they will argue that there were other counties (namely Cavan, until recently) that didn’t have a hurling team for years, while some others only pay lip service to the code. So while that’s not to entirely defend Kilkenny’s position on Gaelic football, there is a lesson there: Specializing on one code CAN work. So food for thought there, for a few other dual counties.

Again, the information here is hardly surprising. Kerry were the aristocrats of football for years, and though they’ve lost their top spot position in recent years, there’s no doubting the tradition and commitment in the game to the South West. One can’t but help have an admiration for them.

Of the other counties on the list, Cavan will feel they have dramatically over-achieved throughout their history. Now granted, these statistics are only based from 1932-1952 when the county were at their peak. In the 65 years since, they haven’t won an All-Ireland, but recent signs indicate they may be about to make their way back towards the elite powers in the game.

Again, no surprises with the top 2. Tipperary can also be proud of their hurling, and football tradition, but a special mention has to be given to the county in the fourth slot. It isn’t said often enough, but the achievement of a small county such as Offaly to win 7 All-Irelands (4 Hurling, 3 football) in a 27 year period from 1971 to 1998 was one of the greatest ever seen in the GAA. There’s been a lot of bile spewed in recent times about the county’s fall from grace. What gets lost in that is how much they achieved in the first place. Look around the midlands and counties such as Laois, Westmeath, Kildare etc have underachieved. Offaly are struggling now, but it’s only right to lionize how good they were for so long.

Again, the stats here will surprise no-one. A noticeable outlier is the case of Antrim. You could argue that a county with their size (the second largest population in the country outside of Dublin) should have achieved a lot more in their GAA history than they’ve done. The counter argument is that considering the county is made of 60% British unionists, they’re doing well to keep the GAA going at all.

Antrim have always been an anomaly in Ulster GAA terms: the one county to have put Hurling before football. In that sense, they’ve racked up a hell of a lot of Ulster hurling titles. On the minus side, a lack of competition within the region has seriously hampered their ambitions of outright hurling success. Perhaps a consistent introduction into the Leinster championship at under-age level would boost their prospects. Well that, or an introduction of a “Team Ulster” in hurling. They will always be fighting against Geography though.

Galway’s success includes 25 of the now defunct Connacht Championship as well as one Leinster title from the last 8 years. Similar to Antrim, it seems the county have suffered greatly from their remote geography for all of these years.

One other interesting stat is that Waterford have been more successful at winning Munster titles historically, but Clare have been a lot more effective at turning provincial success into All-Irelands. A lesson then, for the Deise men to pace themselves.

Again, no surprises here. Kerry and Cavan are strong over-achievers. Roscommon and Mayo meanwhile, have secured a lot of provincial titles per head of population. Obviously, this is skewed somewhat by the fact that the population of Connacht is relatively small and it’s thus easier to pick up provincial titles per head. Roscommon have faltered recently but, historically at least, their record of success is good. Mayo’s lack of success at All-Ireland level is one of the GAA’s longest running jokes, but what fails to be mentioned is how well a relatively small county has done to consistently remain among the top 3 or 4 sides in the country. Yes, we laugh at them, but in reality, we should be commending the county for their fine GAA tradition.

Another note on the Ulster sides: Monaghan have struggled to convert Ulster success into All-Ireland level but historically at least their level of provincial success is very good. To be continually among the top 8 counties of the last few years shows that the county are punching at their weight, if not above.

Allied to this, historically Tyrone have not had a fantastic record, but if we were to conduct this study over the last 20 years or so then the figures would look exceptionally good. Their success in that time is a credit to the people who are working within the GAA in the county.

The most comprehensive list of titles of counties. It makes good reading if you’re from any of the top 6 or 7 counties (Kilkenny, Offaly etc). Given their sizeable populations, the likes of Galway, Meath, Limerick and Cork will all feel they have hit about par in their history, although some teams, particularly Cork hurling, has struggled in recent times.

Wexford’s figures look decent, but most of their All-Irelands were won in the distant past. The likes of Armagh and Derry have struggled historically considering their populations although they would argue that the conflict/vast Loyalist populations have conspired against them over time. Down’s bare statistics look poor, but considering the majority of their population is loyalist, to win 5 All-Irelands in the last 60 years is no mean feat.

Donegal’s record over time has been mediocre, but they’ve improved massively recently. Louth were historically strong, but bar one Leinster title they should famously have won in 2010, they have underachieved in recent years. It’s a similar story for Kildare who should be within the top 7or 8 footballing counties in the country based on population. The likes of Longford and Leitrim will probably figure they have shot about par given their small population.

Of the 32 counties in Ireland 9 have suffered the ignominy of failing to win an All-Ireland at either code. For some there is a simple reason behind this: their lack of size. Others (eg in Ulster) may argue they come from large protestant and unionist communities. Sligo, also, is more of a soccer town than a GAA one. Carlow have struggled in a difficult footballing province, and have a decent, if not competitive at the top level, hurling team.

Westmeath has quite a big population for a county with 0 All-Irelands, although it’s arguable that the figures are skewed in recent years by the fact it is now part of the large Dublin commuter belt. Historically then, you may argue that the county has under-achieved. In recent times though, as one of the top 2 or 3 footballing sides in Leinster, they’ve punched their weight and then some.

The most ignominious of all polls. To go through 130 years of Gaelic games history without a

provincial title in either code is pretty bleak no matter what way you spin it.

Now if you are from Fermanagh you may argue that the county is small, with a decent sized unionist community, and is fighting to win football honours in the most difficult of provinces. To get to the last 4 of the All-Ireland football championship in 2004 was a fantastic achievement against the odds. As for Wicklow though…well…

Certainly in terms of population they are a big county, and while it’s inarguable that they are facing the monoliths of Dublin, Meath etc in Leinster etc it’s not as if they are challenging them. If anything, they are more akin to the likes of Carlow and Longford who have much smaller populations. Apart from a brief period during Mick O’Dwyer’s reign, they’ve barely won a qualifier, and I can’t remember them getting to a Leinster semi-final in recent years, never mind a final. So in light of this, I pose a question that one of Sportstalk’s readers may be able to answer: why are Wicklow so bad at GAA?