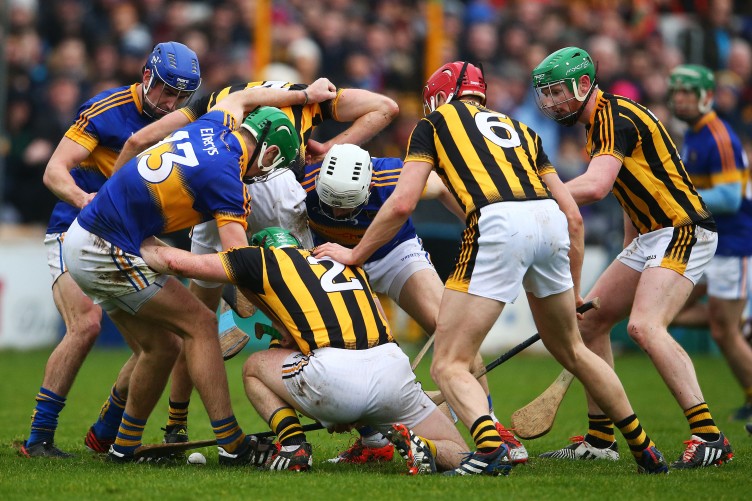 Tonight 15 players from Kilkenny and Tipperary will be given the honour of been named as the starting line up for the much anticipated All Ireland Hurling final. Although the Tipperary line up is all but certain with the expectation of John Bubbles Dwyer slotting in to replace the unlucky Niall O Meara in attack the Kilkenny selection is still clouded in mystery due to Michael Fennelly’s session ending injury. It is likely Brian Cody will make one other change in the forwards from the semi final epic victory over Waterford. Here are the 8 possible players in the running to capitalise on these openings.

1. Kieran Joyce
A regular at no.6 for 3 years until dropped for the semi final replay to Waterford, Joyce is hotly tipped to retain his position at centre back releasing Conor Fogarty back to midfield. Joyce’s man of the match display in 2014 on his likely opponent Bonner Maher will certainly sway Brian Cody’s decision in recalling the Rower hurler.

2. Lester Ryan
2014 captain Ryan has found himself in and out of the team over the past number of years despite some excellent form most recently in the Leinster final against Galway. The no nonsense, hard working hurler could slot in at midfield or half forward to try break up Tipp’s physical presence and gain vital possession between the 40’s.

3 Jonjoe Farrell
In line for Hurler of the Year after two explosive games in Leinster registering 2.09 the Thomastown native lost out in the replay after a quiet first day against Waterford. His ability to win dirty ball and finish could see him reinstated in the corner freeing up Tj to stay in midfield.

4. John Power
After an impressive second half display against Galway when brought on at half time, Power was rewarded with a start against Waterford. Failing to make an impact he was then dropped for the replay. He did however shine when both teams last played in 2014 scoring 1.01 so this form may give him the nod. His aerial strength could help his cause especially against the smaller Tipp backs.

5. Kevin Kelly
Despite starring during the league Kelly did not feature until deep into added on time in the replay. He did however register two late goals against Tipp back in spring to drag Kilkenny over the line so could be an outside chance of seeing game time Sunday.

6 Mark Bergin
A surprise starter for many in the replay, the O lochlans sharp shooter was rewarded for his incredible club form. Despite plenty of possession he failed to make the same impact as fellow starting debutant Liam Blanchfield and was substituted with 18 mins to go. He could however be given another chance to redeem himself and no doubts if given the same ball as 3 weeks ago with the bigger pitch, could keep the board ticking over.

7. Rob Lennon
The thundering corner back gave two very solid displays for Kilkenny in Leinster before the return of captain Shane Pendergast. The versatile back could slot in anywhere on the half back or full back line if Kilkenny need to free up another defender for a man marking job.

8 A.N.Other
Let’s be honest this is Brian Cody so anything is possible and any previous unused sub could be given an unexpected nod for Sunday. Wally Walsh 2012 springing to mind.

At 8 o’clock this evening the infamous “chart” will be flipped over and all will be revealed..Who would you start?

Westmeath call on “BATMAN” to seal promotion to Division 1

All the midweek GAA results