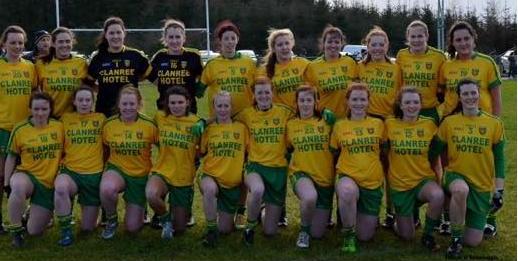 It’s all change for Donegal Ladies this year with the loss of several experienced players but many young players have stepped up to the mark. The Ulster County have a Division 1 semi-final to look forward to on Easter weekend.

Speaking on this week’s Sportsgirls Podcast Donegal player Katy Herron believes the county needed change: “The team we had last year would’ve been the team we had for the last five or six years. It was kinda the same team rolling every year. The big change this year there has been so much freshness coming in. We were the ones feeling a little bit isolated because all the young ones knew each other and there was so few of us.”

Katy has been impressed with the young players who have come in and their attitudes: “They bring a good positive vibe. They have no cares in the world. The older girls analyse everything, we overthink everything and these girls are coming in, don’t know what to expect and they’ve no worries. (They) Don’t know the big name players and they’re going out playing games and we’d be talking about the players and it doesn’t bother them, because they don’t know who they are. Which is great because they can go in and play with confidence and not be stressing about things.”

The players that left can’t be replaced and Katy understood their decision to leave: “There are some of the girls we’d love back and would strengthen up the panel but the girls have plans.”